One of the primary topics in cognitive psychology is Attention. You might be here because you’re studying for a test, or perhaps you’re writing a research paper on selective attention theories. Either way, we strive to give you the best overall information on the topic so you can continue your studies and contributions to psychology.

Reading this page, there are many inputs to your brain:

When it comes to attention, you can’t focus on all of these at once. However, you can focus on one for a certain period of time.

What is Attention in Psychology?

Attention is defined in psychology as selectively concentrating our consciousness on certain sensory inputs or processes. It includes our ability to focus on information that is relevant to a task at hand, while ignoring other useless information.

In one of the earliest attention models, Donald Broadbent proposed that we filtered out information based on physical characteristics. He said we had a filter where we could pick what to listen to. For example, if you’re listening to your sister who has a higher-pitched voice, your attention would “bottleneck” and you wouldn’t hear your brother speaking in the background. 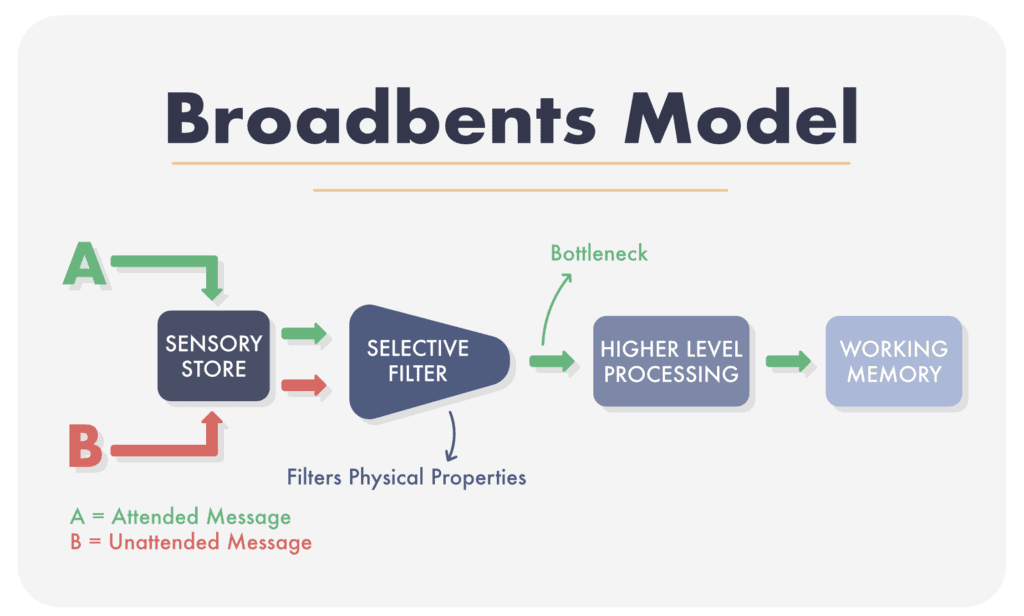 Broadbent’s filter model has a few holes, one of which is the Cocktail Party Effect. Imagine yourself at a party and you’re deep in conversation with a beautiful woman until a guy halfway across the room says your name. Somehow, you hear your name. This means that you didn’t “bottleneck” your attention to just the beautiful woman…

Anne Treisman was actually one of Broadbent’s students and continued his work on attention theory. She theorized that instead of “bottlenecking” what information passed to our attention, we just “attenuated” it. Think of this like a volume knob, where we can turn down and turn up certain stimuli.

When you’re talking to your sister, you turn down everything else so you can listen attentively. When someone else says your name in a party, the volume was low, but low enough that you still heard it, and then you turned the volume up because your name is an important word to you.

You can read more about selective attention theories here.

Change Blindness is a phenomenon that occurs when a participant is shown two different stimuli, but doesn’t notice any changes.

Why is this important? It’s used as evidence against eyewitness testimonies and situations like distracted driving.

Another very similar effect is called Inattentional Blindness. This is a person’s failure to notice something that is fully visible because their attention was focused on something else.

For example, when you look down at your phone while driving, you might not notice a deer trying to cross or another car changing lanes.

When it comes to attention in psychology, one of the most interesting topics is subliminal advertising. Is it a real thing? Does it really increase profits?

There are many studies on subliminal advertising, but the conclusion is simple: they don’t really work.

The Stroop Effect is a really interesting thing that happens when the brain shows decreased reaction time while focusing on two stimuli.

The best way to explain the Stroop effect and how it relates to attention is to have you attempt to read the colors below. Don’t focus on reading the words, instead say the color of each word aloud. 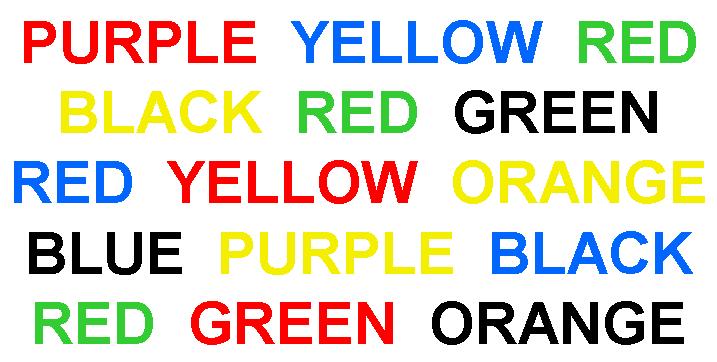 It’s quite difficult, isn’t it?

There are many theories for why this happens, but the one thing we are sure of… is that it’s difficult to divide our attention.

One of the practical applications of studying attention is our understanding of how multitasking works. In almost all of the studies I’ve looked at, multitasking greatly decreases the effectiveness of both tasks. In other words, multitasking seems to be a burden, more than a productivity trick.

Why? Cognitive psychologists say it’s because switching tasks has a cost. When your brain switches from one complex task, to another complex task, there is a cost you must pay to “switch gears”. This shows that attention doesn’t like to be divided and that concentrated focus for long periods of time is better than unconcentrated “multitasking”.