What do you do when you encounter failure? You probably have a preferred way of dealing with failure. You may have been taught to confront the issue, learn from it, and move on. This is an ideal reaction to bad news; but sometimes, our brains have other plans for us. Without our knowledge, the brain may deploy “defense mechanisms”. ​

What Are Defense Mechanisms?

Defense mechanisms are cognitive processes that allow us to avoid dealing with bad situations, at least temporarily. The bad situation may be failure, lifelong insecurities, you name it. We are rarely aware that we are using these defense mechanisms, even if they are painfully obvious to others.

In many cases, we can categorize people based on which defense mechanisms they commonly use, which puts this topic in the realm of personality psychology.

Get to know these defense mechanisms; you’ll recognize quite a few of them immediately.

It should not be a surprise that Sigmund Freud is the man behind the theory of defense mechanisms. They play right into the pleasure-pain principle, which states that humans will do anything to seek pleasure and avoid pain. We may not always be aware of the ways that we avoid pain and discomfort. Our ego takes over and we unconsciously act through defense mechanisms and other methods.

People may not be aware that they are using these defense mechanisms, even if it’s blatantly obvious to the people around them. As we go through the main defense mechanisms, you may be able to point to a person or an event where these were obviously used to avoid bad news, insecurities, or other negative situations.

Defense Mechanisms are very closely linked to Ego, as Freud noted. Our egos are very precious to us, and our brain will do all kinds of things to protect them, and that’s exactly what these mechanisms are below: 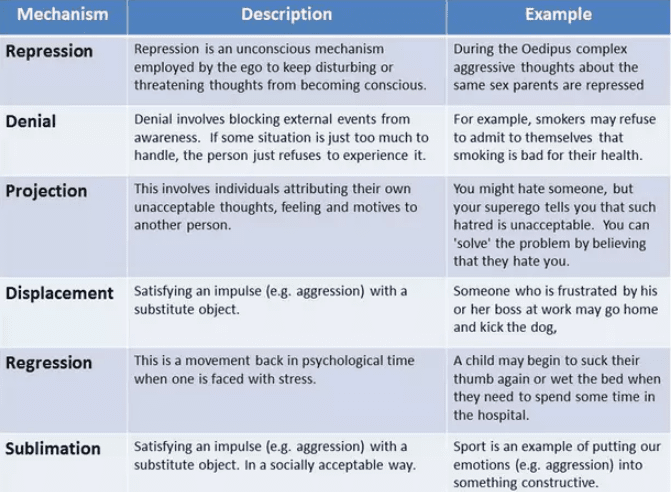 There seem to be around 9 defense mechanisms that are common in the worldwide population, no matter the culture, age group, gender or sex differences. This is important to psychologists because it shows that how we deal with pain and trouble seem to be similar on a biological level. Throughout more research, we have found many more than 9, however some are culturally related, and others are quite rare.

We have all seen denial play out as a defense mechanism. Denial is the process of refusing to receive information or a bad situation. If you can convince yourself that the bad situation is not present, then you won’t have a need to deal with the situation.

Examples of Denial as a Defense Mechanism

Someone may be in denial that a family member died or that their boyfriend broke up with them. They go about life as if the person was still alive or that they are still in the relationship.

In another example, Reddit users discuss how men in power may deny pressing issues like climate change as a defense mechanism.

Displacement is the process of targeting an unrelated subject during a bad situation. Often, it would be impossible or a bad idea to target the true cause of the bad situation (i.e. the weather, everyone who bought a certain item before it was sold out, etc.,) so the person chooses an “easier” target (i.e. the person working at the cashier, the front desk, etc.)

Example of Displacement As a Defense Mechanism

Let’s say you work at the gift shop of an amusement park. In the middle of the day, it starts to pour. None of the guests can enjoy the rides or being outside in the park, so they come into the gift shop and start to unleash their frustration on you. They start to yell and scream, even though you had nothing to do with the rain.

This is an example of displacement, and anyone who has worked retail during the holidays knows the ineffectiveness and frustration of this defense mechanism.

A person may take feelings that they are uncomfortable with and project them onto another person. While this is commonly viewed as a “subtle” defense mechanism, it can be painfully obvious when an angry person is just dealing with insecurities or questions that they don’t want to answer about themselves.

Example of Projection as a Defense Mechanism

Have you ever watched a movie where the ruthless school bully ends up to be insecure? Maybe you can name a few of these ruthless bullies in real life. They tell someone that they are fat or ugly – but only because they feel those things about themselves. This is a prime example of projection.

Another sometimes painfully obvious defense mechanism is reaction formation. A person may not want to come across as feeling some type of way, so they form a reaction that appears to make them feel completely differently. They may feel upset on the inside, but claim that they are super excited and happy to avoid confrontation or admitting their true feelings.

Example of Reaction Formation As A Defense Mechanism

Let’s say a man has feelings for another man, but he doesn’t know how to handle the possible humiliation of coming out of the closet. To compensate for these feelings, he goes out and tries to charm every woman he can find. He puts on behaviors to prove how super “straight” he is so no person could ever think he had opposing feelings.

Adults cannot be blamed for envying children; it appears that children have no cares in the world, without insecurities or responsibilities. They cry, pout, and whine to get their way and solve a “bad” situation. Adults are expected to “be more mature” and not use these methods to get what they want.

Regression is the process of “regressing” back to these childhood methods of expressing emotion. You might cry, whine, pout, stomp…you name it. Regression doesn’t always work, but it’s a way of pushing your responsibilities away and reverting to a childlike state where you could more easily express feelings in an “immature” way.

Not all defense mechanisms are unhealthy. Sublimation is considered to be one of the more productive defense mechanisms. When a person confronts a desire that they have not achieved, or expectations that they feel they cannot fulfill, they put their energy into constructive activities. These activities may or may not be related to the thing they are insecure about. When these activities aren’t as constructive as the person thinks, they could fall into an obsession, addiction, or just plain unhealthy habits.

People use compensation as a way to cover up for perceived shortcomings. They take actions or display traits to come across as the thing that they are insecure about. For example, an employee may flaunt all of their awards or recognition because they feel that they are not adequate enough. The list goes on and on. It is similar to sublimation, but rather than growing and building themselves to become the thing they are not, compensation usually involves pretending that they already are that thing they are insecure about.

Example of Compensation as a Defense Mechanism

Remember in Shrek, when Shrek see Lord Farquad’s tall, phallic-shaped tower and says to Donkey, “maybe he’s compensating for something?” We all have encountered compensating for a specific type of insecurity, but compensation covers more ground than just the size of…you know.

If you find that you deploy these tactics regularly, it’s time for some self-reflection. What can you do to confront negativity and learn from mistakes?

Are There Mature Defense Mechanisms?

Defense mechanisms are often painted in a bad light, but not all of them will ruin your life or keep you from acknowledging your feelings in an unhealthy way. Knowing the difference between suppressing your emotions and processing them at your own speed can determine whether your mechanisms will contribute to your growth or stunted emotional development.

If you recognize that a friend uses defense mechanisms to try and cope with negativity in an unhealthy, you might just want to share what you have learned. Defense mechanisms aren’t always unhealthy, but in the long run, they can prevent people from facing problems, solving them, and growing in the process.