Interested in Erikson’s Stages of Psychosocial Development? You’re in the right place! Read more to learn about each stage of psychosocial development, when it happens, and what a person can gain from this stage. Each stage has their own page with upcoming videos describing the crisis that takes place within each person.

What is Erikson’s Stages of Psychosocial Development?

Erik Erikson and his wife, Joan, were German-American psychologists that created a theory surrounding nine phases of psychosocial development. Their work led them to teaching positions at Harvard and a reputation as two of the most prominent psychologists in modern history.

Fun fact: while they drew inspiration from psychologists like Freud and Piaget, Erik did not even obtain a Bachelor’s degree in psychology!

These stages take a person from infancy to their 80s and beyond! While each stage focuses on a different dichotomy and basic virtue, they have one thing in common. In each stage, the person goes through some sort of “crisis.” They can either rise to the top and develop a healthy personality or they can feel neglected, shamed, and disappointed in themselves.

What Are The Eight Stages of Development?

In the first 18 months of a child’s life, they need food, comfort, and other basic necessities provided by their mother. The mother is a key figure in the trust vs. mistrust stage.

This stage isn’t just important for social development. Neglect or lack of socialization in the first months of a child’s life can affect their ability to develop language, communicate, or control their emotions. In a later video, I will talk further about studies on neglected children and how their mistrust halts their later development.

As the child develops, they start to learn that they have control over their actions. Between the ages of 18 months and three years, they enter into a second stage of psychosocial development. Both parents play a role here. If they allow the child to explore their physical bodies and their actions, they will start to develop a sense of autonomy. If, instead, the parents maintain control over the child, the child may start to develop a sense of shame.

The third stage of development happens between the ages of three and five. The child has the opportunity to take even more control over their world. They can create games for their family, assert themselves more, and even begin to read. If they are praised for asserting themselves and taking initiative, they will continue to engage in these behaviors. If, instead, they are punished for taking initiative, they will develop a sense of guilt. 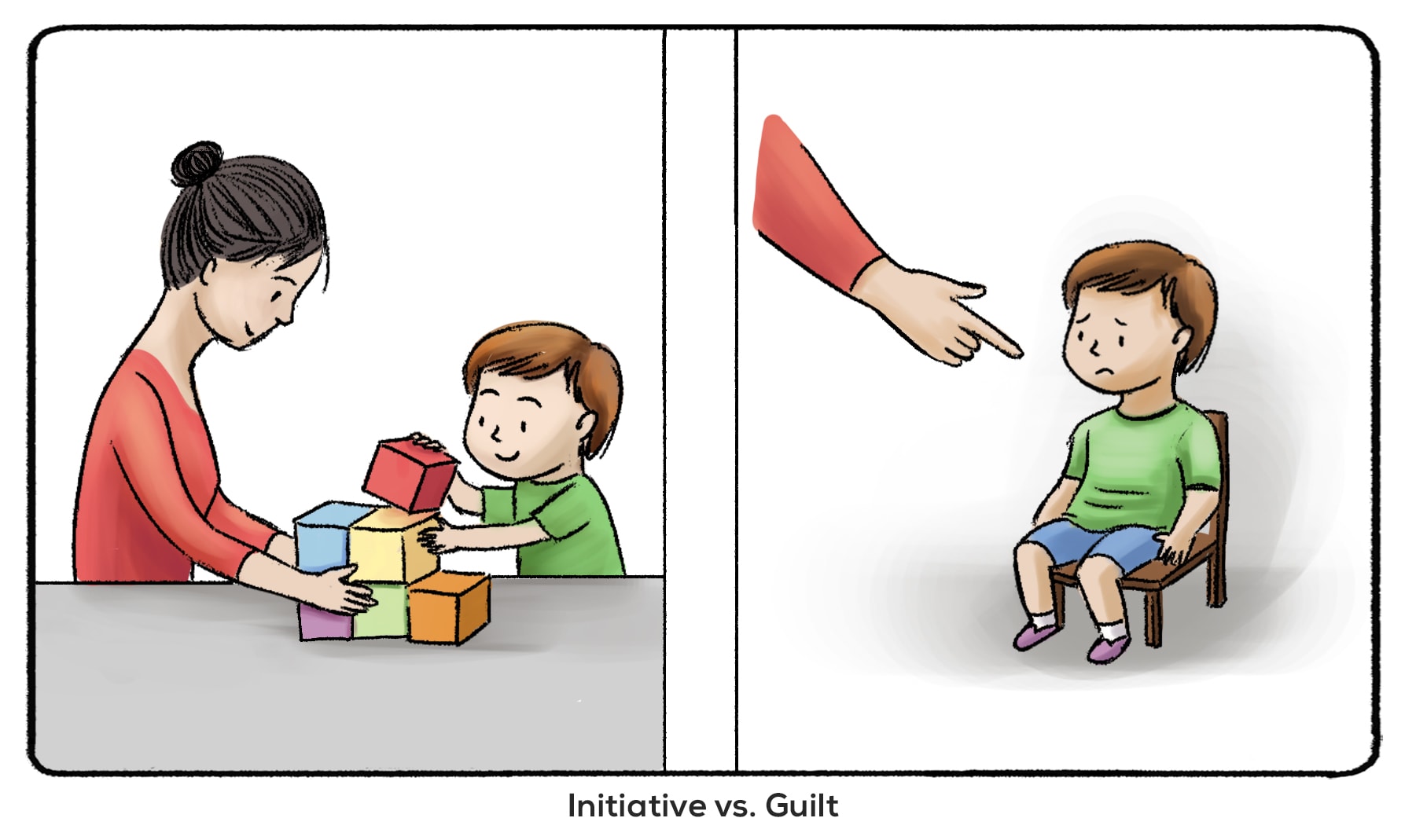 During their time at school, a child begins to learn that they are different from the other people around them. They may begin to compare themselves to the people around them. Some children at school receive praise and recognition for their work – these children will gain a sense of self-confidence and industry, or hard-working abilities. The children who are not recognized, or instead told that they need to do better, will feel inferior. Teachers, neighbors, and a wider circle of acquaintances contribute to this stage.

This stage takes place during adolescence. Teenagers aren’t just moody – they are just trying to figure out their identity and role in the world. At this stage, adolescents understand that there are expectations placed upon them. They also know that they have needs and wants of their own. If they are encouraged to pursue their identity, that sense of identity will grow stronger. If there are conflicts, the adolescent will experience role confusion.

The identity vs. role confusion stage isn’t the easiest to go through! The question “who am I?” is a big question to answer. But as you start to get a grasp of who you are, you can form stronger relationships with the people you want to be with.

The intimacy vs. isolation stage takes place between your 20s and your 40s. At this point, a person has a pretty good grasp on the person that they want to be and the values that they hold true. They seek other people, including friends and partners, that fit in with their identity. If a person finds those people and forms strong bonds, they will be able to experience intimacy and enjoy love.

Of course, there may be conflicts here. A person may find themselves trying to make friends or form relationships to no avail. The person will feel isolated. In the video about this stage, I will dive deeper into how dangerous isolation actually is.

By the time you reach your 40s, a person ideally feels more stationary and at a place where they can start to help others with their psychosocial development. By helping others, a person can feel confident that their legacy will outlive them. Future generations will still cherish and share the person’s accomplishments for years after their death.

Without this sense of care or nurturing, a person between the age of 40-65 can feel stagnant. They might feel that things have come to a halt and that they need to prove themselves in order to build a solid legacy. This conflict can result in a person’s “mid-life crisis.”

The last stage happens in the last years of a person’s life. At this time, a person can reflect on their accomplishments. Did they achieve what they wanted to achieve? Were they able to create a legacy that can be passed down to future generations? Did they meet expectations that they (or others) had for them?

These stages come with high highs and low lows. A baby failing to trust its mother or an adult experiencing isolation may also experience strains in their mental health or other forms of development. But when a person is loved, praised, understood, and surrounded by community, they can lead a life with integrity, wisdom, and a legacy to last for generations.

How to Memorize Erikson’s Stages of Psychosocial Development

These eight stages are not easy to remember without mnemonic devices! One thing that I like to do in order to remember long strings of words is create a phrase with the first letter of each word. With the two “sides” of each stage of development, you could create two phrases:

Have fun with these two phrases or even try to create one 16-word phrase using all of the terms!

There is a reason we still study the stages of development in psychology! These stages are still relevant; many argue they are more relevant as positive psychology has taken center stage. Erikson’s stages help us understand why we might feel conflicted when thinking about life fulfillment and our life’s general purpose.