What drives you? More importantly, once you’ve accomplished that task, is that drive completely gone? In this article, I’m going to tell you what Drive Reduction Theory is and give you a few examples of it to better help you understand.

These might be some confusion questions to ponder. In some cases, the answer to the second question might be “yes.” In some cases, it might be “no.” Sometimes, the things that drive us cannot be accomplished, right?

These are the questions that psychologists like Clark Hull set out to answer. Hull was a psychologist who influenced many through his work with hypnosis and conditioning. But his most famous work was the Drive-Reduction Theory.

The Drive-Reduction Theory attempted to explain why humans are motivated to do the things that they do. While this theory isn’t widely accepted anymore, it’s still important to know if you want to study psychology.

Hull theorized that human beings were motivated by “drives” or “arousals.” Their decisions helped to reduce these drives and create homeostasis in the body.

There are two different “drives” that motivate us to take action: primary and secondary drives. Hull explained that primary drives were physiological drives. Hunger, thirst, and feeling very cold may all be considered “primary drives.”

Secondary drives aren’t so primal, but they contribute to primary drives. The drive to be successful and rich may not be essential to your survival, but one could argue that riches can provide you with the best food, most comfortable shelter, etc.

That’s why it’s still important to understand theories like the Drive-Reduction Theory. By understanding all of the pieces that have gone into the larger psychology puzzle, you can get a better sense for how we’ve come to the conclusions that we have made and why we believe the theories that contribute to psychiatry and other practices.

When Do We Experience These Drives?

Here’s a simple example. You don’t eat a lot for breakfast and decide to go for a run. Very quickly, the body feels out of balance – it needs energy to replenish the energy it just put out during the run. You feel hungry and fatigued, and decide to grab a bite to eat. Once you eat, you feel much better and free to go about your day.

That hunger and fatigue is a high drive, or arousal. While experiencing this drive, you are motivated to eat and reduce that drive. That’s why this theory is called Drive-Reduction Theory.

These actions don’t just happen one time. You might know that eating chicken reduces your drive for hunger more than eating a salad. Or that eight hours of sleep is more effective than four. So you are more likely to strive for eight hours of sleep or reach for a chicken sandwich. Hull had an explanation for this. He, like many behaviorists before and after him, believed that humans could be conditioned. When a human reduced their drive for hunger with food, they reinforced that habit. The next time they feel an arousal associated with hunger, they are likely to look for food. Makes sense, right?

Hull took things a step further. He created an equation to go with the Drive-Reduction Theory. Here’s what it looked like: 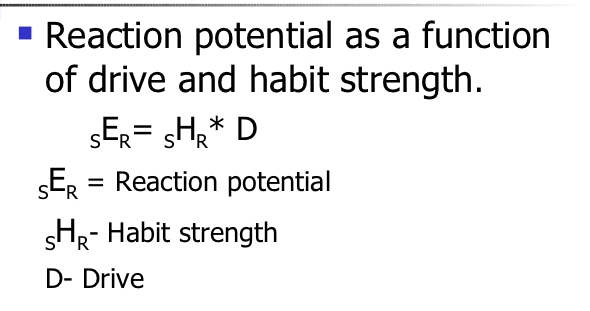 These variables included the strength of the drive, the strength of the habit, and other factors. Does it look complicated? You’re not the only to think so. And because this equation didn’t always work, it didn’t go too far as Hull tried to share his theory.

But the Drive-Reduction Theory isn’t something that should be ignored completely. The Drive-Reduction theory can be found as part of larger theories concerning behavior and motivation. Take Maslow’s Hierarchy of Needs. Maslow describes physiological needs (food, shelter, etc.) as the base of a pyramid of needs. We aim to fulfill these needs first, possibly because we are “driven” by hunger, cold, etc.

But here’s where some big critiques come into play. Maslow’s needs certainly do not stop at basic physiological needs. On top of needs like food and water are needs including:

While these needs are organized through a pyramid, they are not rigid. Plus, how do you quantify the drive for love and belonging or self-fulfillment? While one could argue that “higher” needs are secondary drives, how do we connect these things with primary drives?

What Explains Our Motivation to Increase Arousal?

One of the biggest questions surrounding Drive-Reduction Theory is this:

“If Drive-Reduction theory is all about decreasing arousal, why are we motivated to increase our arousal?”

Some people do things that make them nervous, like skydiving. Other people deprive themselves of food, water, or other necessities for a larger cause. We go out of our comfort zone out of boredom, curiosity, or other feelings that aren’t so primal.

How do we explain these “drives?” How can we put larger goals into a mathematical equation? These other factors make any equation much more complicated – one might say, too complicated?

These questions, among other critiques, show why Drive-Reduction Theory is not at the forefront of modern psychology.

While Hull’s theory is not accepted or praised as it was in the 40s and 50s, his legacy lives on. His method of quantifying behavior influenced the way that psychologists use the scientific method in their testing. He is also credited as influencing Albert Bandura, one of the most influential psychologists of all time.

The history of modern psychology includes a lot of stories like Hull’s. While psychoanalysis, for example, is considered invalid by many of today’s psychiatrists, it is still responsible for influencing behaviorism and humanism. Psychologists who are making breakthroughs today have likely been influenced by the work of psychologists who may no longer be considered revolutionary or even valid.