It’s always nice to be recognized for good work, even if that recognition or reward comes at random times. To psychologists, this system of reinforcements and behavior is one way to approach operant conditioning. Operant conditioning is a process in which reinforcements or punishments are used to consciously encourage (or discourage) behavior. Reinforcements, like concert tickets or kind words, are ways to encourage the behavior to happen again.

Reinforcement can happen through many approaches or schedules, including variable interval reinforcement schedule.

What is Variable Interval Reinforcement?

Variable interval reinforcement is a schedule in which reinforcements are distributed at varying intervals of time, depending on whether or not the desired behavior has been performed. These intervals may be completely random or within a range of times, but they are not fixed.

This is a partial schedule of reinforcement, as opposed to a continuous set of reinforcement. Not every behavior is immediately reinforced. A kid could spend their whole day choosing to study instead of playing video games, but they are not going to be rewarded for every minute or hour that they study. Reinforcements are given seemingly at random.

Not everyone who schedules this type of operant conditioning knows that they are operating on a variable interval reinforcement schedule, but it works just the same.

One classic example of variable interval reinforcement is having a health inspector or secret shopper come into a workplace. Store employees or even managers may not know when someone is coming in to inspect the store, although they may know it’s happening once a quarter or twice a year. The secret shopper goes into the business, interacts with employees, and sends a report back about their experience. If the employees did their job well, they might get a bonus or just congratulations from managers. 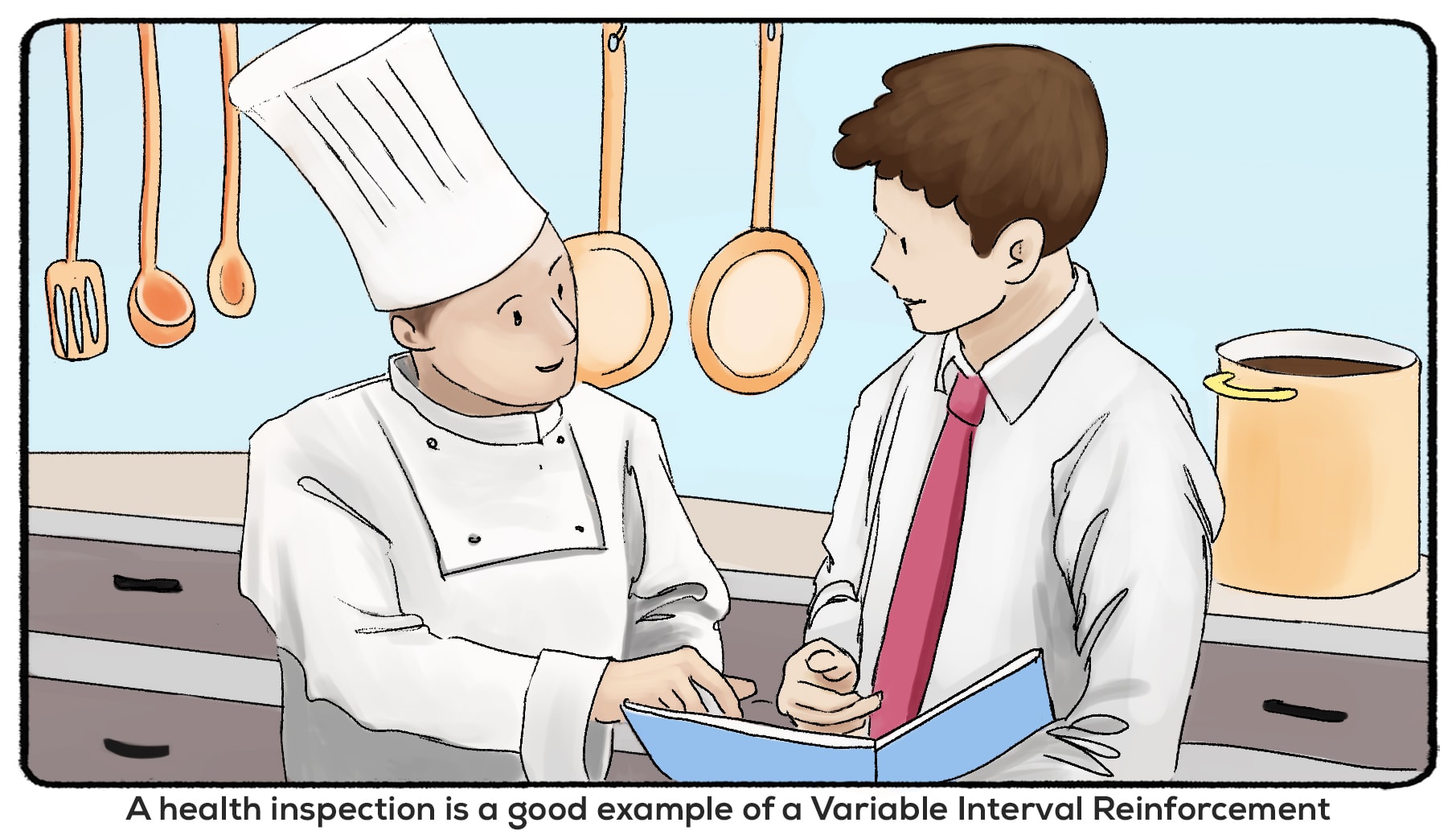 Another classic example of variable interval reinforcement is a pop quiz. Teachers won’t tell students when these pop quizzes will happen, so students are expected to pay attention and study throughout the week, month, or semester. If the student has displayed this good behavior, they will likely get an A on their quiz and their grade will go up.

Not all reinforcements have to be a reward. Things may also be removed from a situation in order to encourage certain behaviors. One example is speed traps and DUI checkpoints. These “traps” are set up at various times, dates, and places along the highway. The stress of running into one of these traps is always lingering over drivers, especially in states where these traps are common. But if you aren’t speeding or you encounter a checkpoint with a blood alcohol content below the legal limit (.08,) that stress will be removed and you will be free to go.

You may be able to think about a time where your parent walked into your room, saw you studying for school instead of goofing off, and told you they were proud of you. No parent does this every time they see their child doing well; they might be too tired or distracted to do so. These moments of praise likely come at varying intervals.

Maybe your parents decided one day that, because you’ve been practicing the violin a lot, they are going to buy you a ticket to a concert that you’ve been wanting to go to. Small reinforcements like this likely encouraged you to continue that good behavior, even though you don’t know exactly when you’ll get another “treat” or reward like the ones you’ve received in the past.

Can I Use Variable Interval Reinforcement In Training?

Running into a DUI checkpoint is a strong motivator to stay sober or have a designated driver. Random health inspector visits are a strong motivator to keep your restaurant clean. If you know that you are going to run into a speed trap at some point during the week, you are more likely to drive the limit than you would if speed traps only were set once a year. But distributing treats to dogs at random times is not likely to be effective, unless the dog can immediately connect the treat with a good behavior. Dogs don’t have long attention spans, so good luck with that!

Even in humans, there is a brief dip in performance once the behavior is reinforced; but overall, the rate of performing the behavior remains steady. If you want to encourage your child to do their homework or encourage your employees to greet every customer, consider a variable interval reinforcement. You may have a harder time setting this schedule for yourself because you can’t surprise yourself, but this is where an accountabilibuddy or a trainer can come in handy. Tell them about a variable interval reinforcement and ask them to incorporate it into your meetings or training sessions. You might find yourself behaving better than you did before! 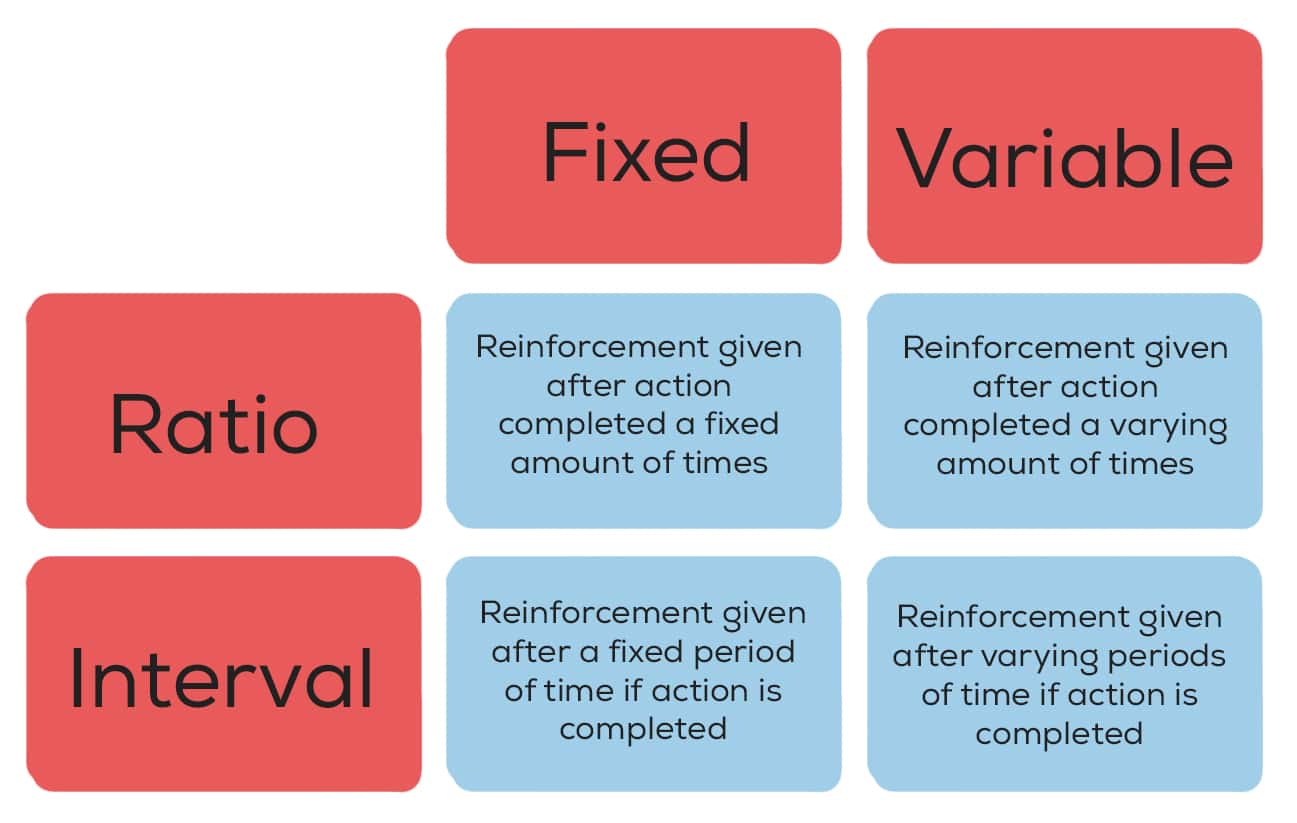