There aren’t many free memory tests online, and there are none like this. Here at Practical Psychology, we have created the first and only 3-in-1 memory test that measures your short term, long term, and working memory using a quiz you can take in under 5 minutes.

If you get confused or stuck, scroll down to learn more about each type of sub-test and it’s instructions!

As of right now, there have been around 5,000 people take this memory quiz, and with that, I have compiled some graphs to help students and teachers better understand where they lie among the general population that takes this test.

Here is the overall distribution of data based on the “total score” given at the end of the test: 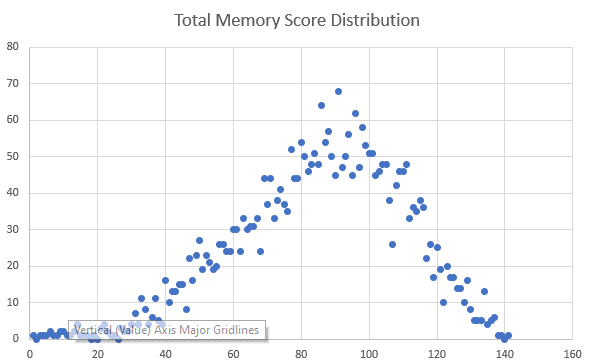 The x-axis is the score, while the y-axis is the number of scores. Next, let’s dive into each specific category!

A short term memory test is very self-explanatory. The user is shown multiple digits of numbers and asked to remember them. Then, the numbers are taken off the screen and the user is asked to type the numbers they remembered in.

This test will become more difficult as more digits are added, and digits are continuously added until the user starts forgetting the digits. According to research, the magic number most people remember is “7 plus or minus 2” items. This means an average short term memory can hold 5 to 9 digits.

Here is the data from the memory test above, with around 5000 results. As you can see, 4 is the most common digit where all the digits are correctly memorized and recalled.

This form of memory usually doesn’t last more than 18 seconds, unless rehearsed. 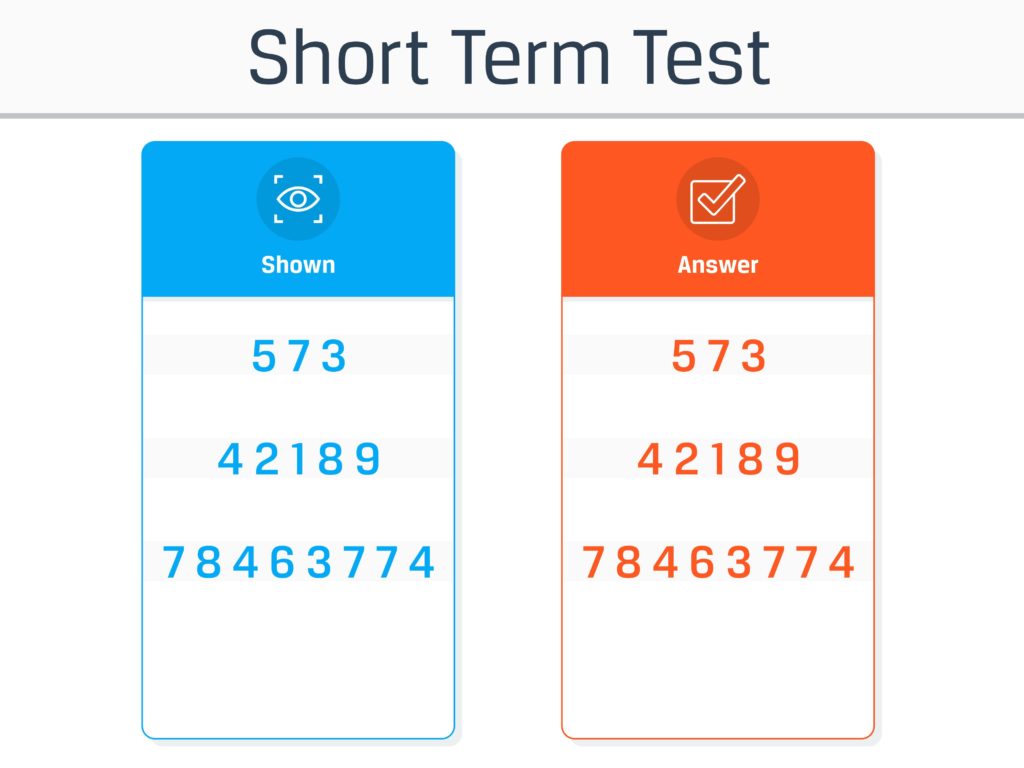 In Cognitive Psychology, long term memory is classified as information stored and retrieved for longer than a few minutes. In this memory test, we use animal images to test your visual memory by showing you 3 animals at first and asking you to recall the same 3 animals at the end.

There are two types of long term memory: implicit and explicit. In this test, we are measuring the participants ability to recall their explicit memory with animal images.

This test may need some modifications to accurately find the limits of human memory. Right now, I am only asking you to remember 3 animals for around 5-10 minutes. It seems almost everyone is able to correctly identify the original 3 animals as you can see in the data above. 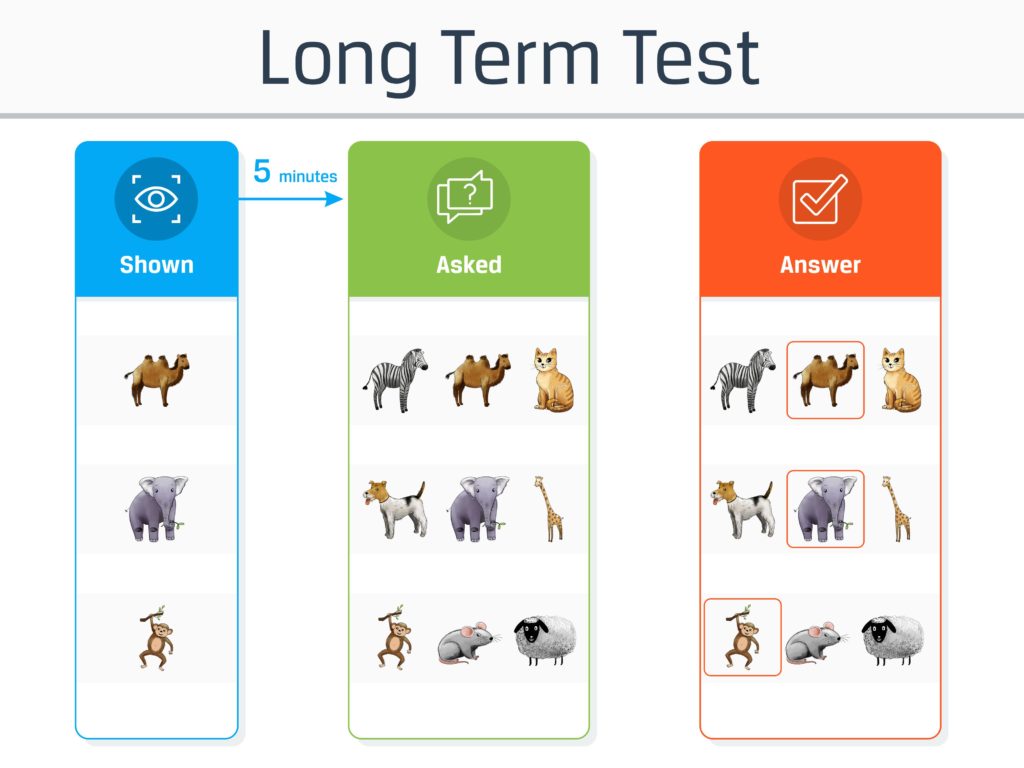 Working memory is the ability to use, manipulate and perform complex tasks on numbers, letters, and items. There are a few different forms of testing working memory, and this test uses 3 different variations.

An N-Back Test is a common working memory test that may be difficult to understand if you’ve never heard of it before. Essentially, there will be a master list of numbers you must try to memorize. The “N-Back” part comes from the test asking you what number appeared “N” numbers ago.

You can refer to the image below to help understand: 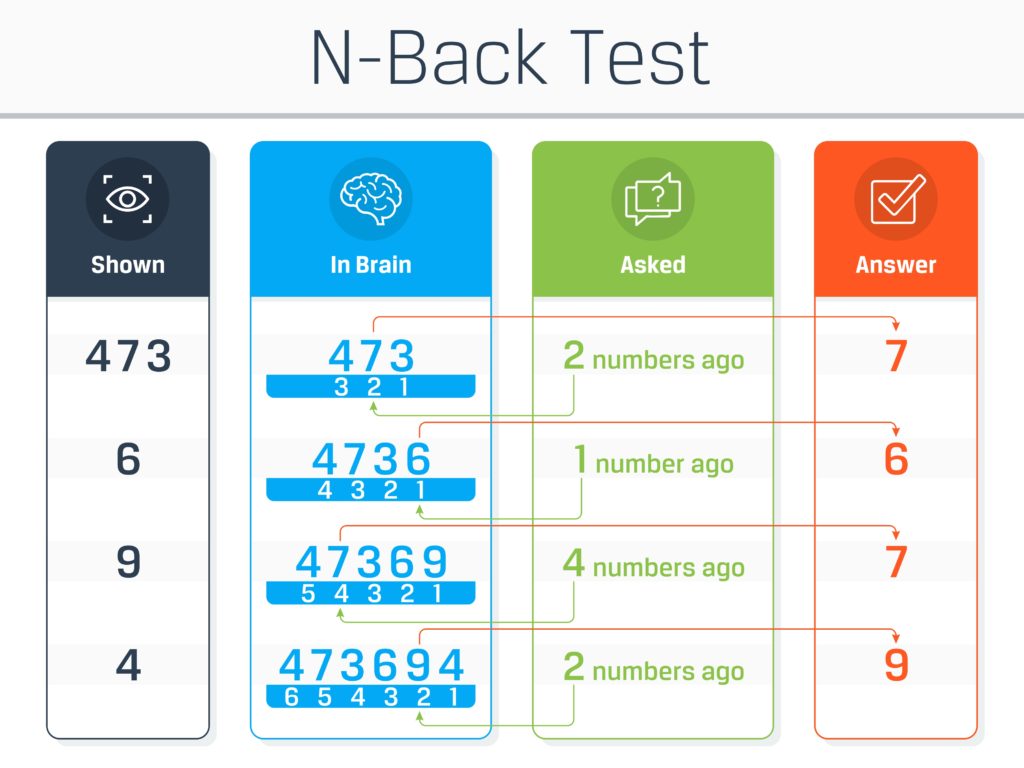 This test is obviously a bit more difficult, and I assume that a few test-takers aren’t able to understand the function. I actually get quite a few emails where people are confused, so in version 2, I’ll try to make this more clear. Here is the data from my initial 5000 test-takers: 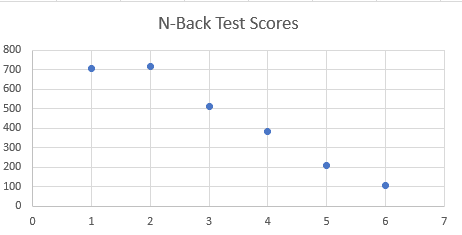 A calculation task is simple, but requires focus. First, the test will give you a few numbers. You must remember those numbers while manipulating them. For example, let’s say you are given the numbers “4, 7, 9”. The task is to add 4 to each number. The correct answer in this case would be “8, 11, 13”.

This is a decent test, and as you can see in the data below, there is quite a nice distribution of test scores: 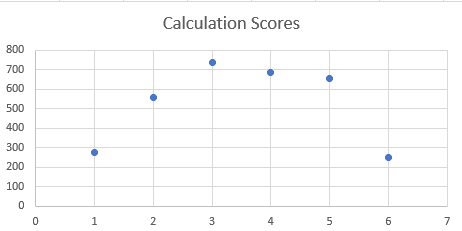 You can increase the difficulty of a calculation test by asking the participant to perform multiple calculations, using larger numbers, or more numbers. 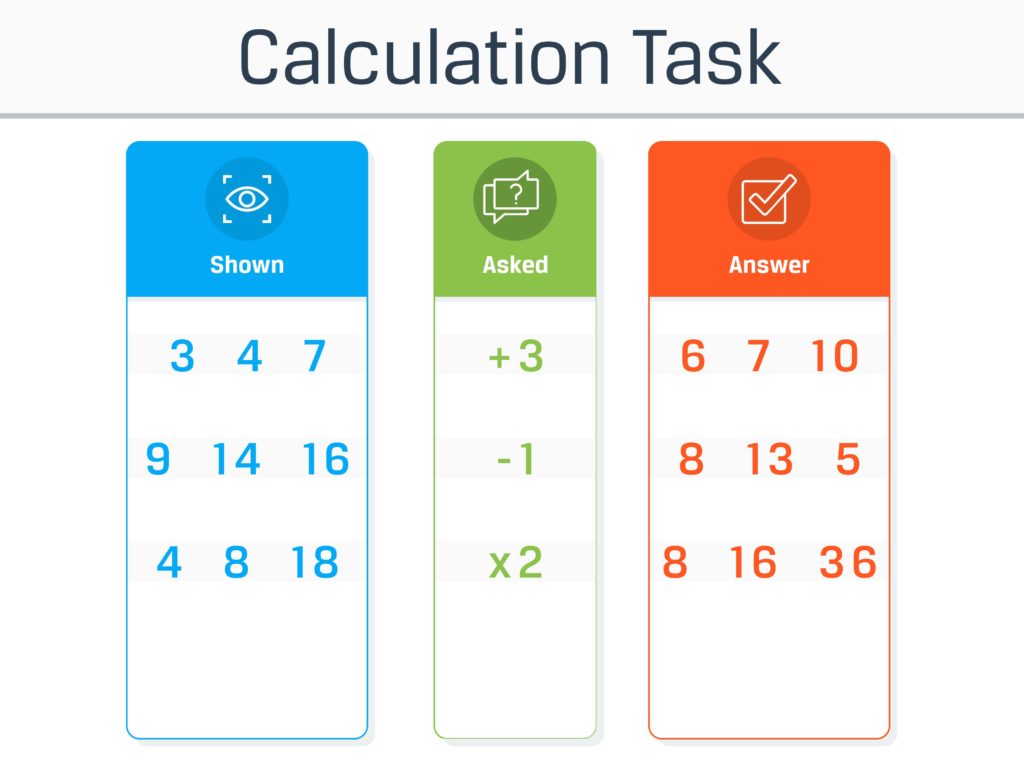 A rotation task tests your working memory by having you perform mental rotations within your visuospatial sketchpad. Some people seem very gifted at rotating three-dimensional objections, while others struggle at this task – which shows we all have varying abilities.

We can experience memory loss in a ton of different ways. From simply forgetting where you left your car keys, to not being able to remember someone’s name, all the way through to forgetting how to get home or not recognizing family members.

How does memory loss happen?

If we think of memory as a store of information that sits inside our brain. Normally, when we want to remember something, we send a signal to our brain to go find and retrieve that piece of information. So far, so good.  Unfortunately, sometimes this doesn’t work properly. In this sense, memory loss happens when our brain is unable to find a piece of information in that store – it’s lost or forgotten.

One of the most common causes of memory loss is age. Unfortunately, there isn’t much you can do about getting older, but we’ll be looking at things you can do to help treat age-related memory loss later on. There are other common reasons for memory loss. For the most part, these aren’t permanent and can almost always be effectively managed to get your memory back to normal.

The treatment for memory loss can vary depending on the exact cause. In most cases, where the cause is non-permanent, it might be as simple as changing the behavior that is causing your memory loss. For example, if lack of sleep is the main reason that you’re super forgetful, you might want to try setting a routine for going to bed and getting up in the morning. For stress, anxiety, depression or an underactive thyroid, you’ll need to see a physician and get appropriate medical treatment to help.

Keeping your body and mind active can really help improve your memory – or at least, slow down the effect of aging on your memory. Doing regular exercise, reading, solving puzzles or playing memory games can all really boost your mind’s ability to remember.

Memory loss due to traumatic brain injury may only be temporary, and if that’s the case, then simply rest and letting the brain heal should be enough.

However, in cases where the injury is more extensive or there is more significant damage to areas of the brain that handle learning and memory, then you will probably need to figure out a way to manage your memory problems, including:

Generally, there is no treatment for dementia-related memory loss. The extent of your memory problems will depend on which form of dementia you have and how far along it is. You can do things to help manage your condition though, in a similar way to traumatic brain injury, these include:

Eating a well-balanced diet and having regular mental and physical exercise can all help slow the progress.

Unfortunately, particularly with Alzheimer’s Disease, memory loss will only get worse as the condition progresses, and there is currently no cure.

Testing for dementia can involve a lot of different tests. This is because there isn’t always a simple blood test that tells you if you’ve got dementia. This means that often medical professionals have to resort to carrying out a few different tests and then weighing up if dementia seems likely. The following are the kind of tests you can expect, although you may only have some of these before a diagnosis of dementia is confirmed or discounted.

Cognitive tests: These tests are about trying to figure out if your general thinking skills are negatively affected. One of the most well-known tasks is the clock test, where you’re asked to draw a clock face and mark a time on it.

Neurological tests: These test more physical symptoms like balance, eye movement and reflexes. Again, these tests are complicated but will highlight if there are any issues with brain signals getting through.

Lab tests: Even if there isn’t a specific blood test for dementia, you might still have bloods taken to look for markers or other problems such as vitamin deficiencies or a thyroid problem that might explain your memory loss.

Brain scans: while scans might not necessarily help diagnose dementia, they could help discount other problems such as stroke, traumatic brain injury, and tumor that might be responsible for your memory loss. You might have a CT, MRI or PET scan.

Finally, you could have a psychiatric evaluation: This will usually focus on things like your mood and general well-being to see if your memory loss might be due to depression or other mental health condition. It’s not uncommon for you to experience depression at the same time as dementia so, even if you score as depressed, it won’t necessarily rule anything out.

[3] link to the previous BAC article