Everyone wants to improve their memory capacity and duration. Being able to hold onto information for a long period of time comes in handy quite often! 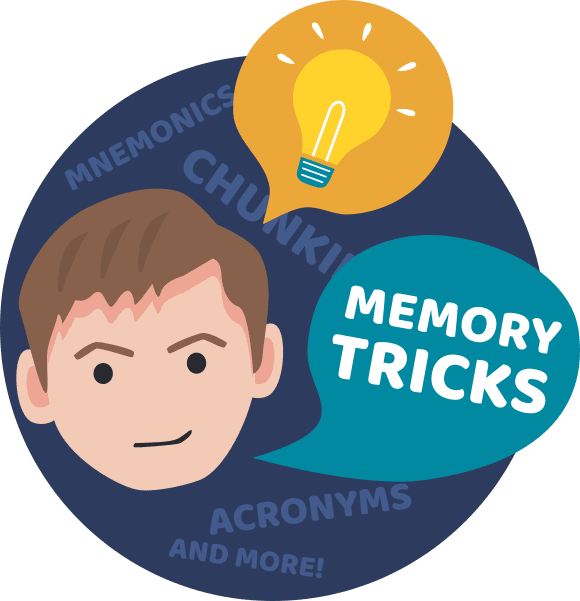 There are certainly ways to improve your overall ability to remember information, like getting more sleep or taking B-12 vitamins. But this video is not about those tricks. It’s about a type of memory tricks called mnemonics.

Mnemonics are memory tricks that can help you remember long strings of information, often in a particular order. You have been using mnemonic devices since...well, before you can remember!

Mnemonic devices have helped people achieve phenomenal feats in the world of memory. Get to know these tricks and devices. You can use them to help you remember phone numbers, create a more secure password, and maybe, one day, break a world record. 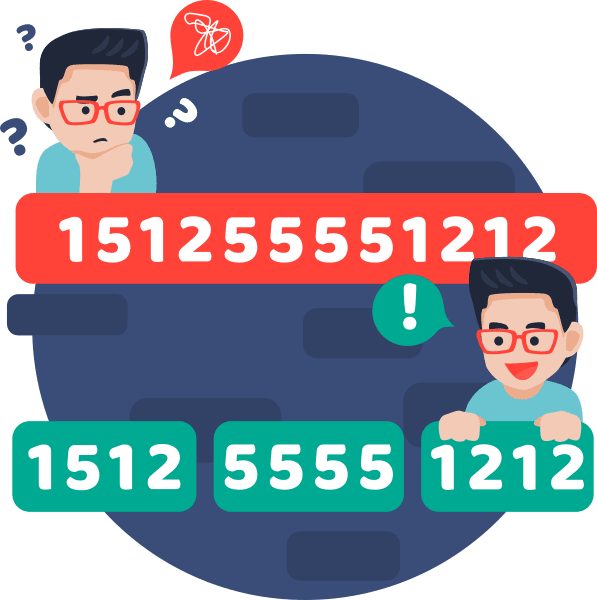 Let’s start with “chunking.” If you have watched my video explaining short-term memory, you have already heard a bit about this mnemonic device.

One example of “chunking” is the way that we memorize phone numbers. We split the ten numbers into three “chunks:”

Even if you can’t normally remember ten numbers in sequential order, you are likely to remember three “chunks” of information.

An acronym is a simple abbreviation for a phrase that makes the phrase ordering easier to remember. 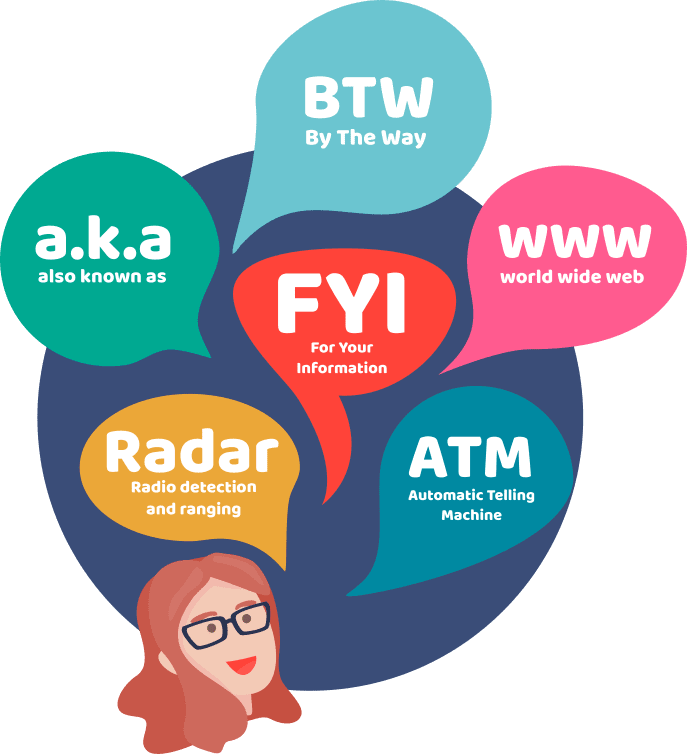 Think back to your grade school days. Can you recall what PEMDAS means? Go back even further to preschool - what does ROY G BIV stand for?

These are all examples of acronyms.

It’s not easy to remember “Parentheses Exponents Multiplication Division Addition Subtraction” in order on a math test. But PEMDAS is just one word. Ten years after your last math class, PEMDAS is likely to stick.

That’s the beauty of an acronym. It’s a single word, or maybe a phrase or title, that reveals a lot of information that you otherwise would not be able to remember in the correct order. 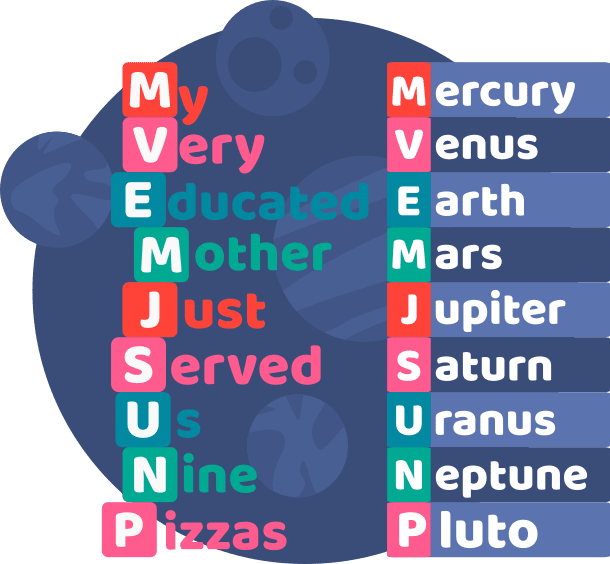 But some people don’t remember PEMDAS as PEMDAS. They remember it as “Please Excuse My Dear Aunt Sally.” If you were taught this trick to remember how to solve math problems, you weren’t using an acronym. You were using an acrostic poem to help you remember information in an important order.

An acrostic is when you turn an acronym into a sentence to increase the likelihood of recalling it.

Take a moment to think of some other examples of acrostic poems.

“Every Good Boy Does Fine” is probably familiar to people who took an elementary school music class.

“My Very Educated Mother Just Served Us Nine Pizzas” is a great way to remember the order of the planets in our solar system.

This is a great method for creating a secure password. Think of an obscure quote from a movie or a phrase that you can easily recall. For example, think of the famous line “May the Force Be With You” from Star Wars. That sentence is too long to be a password, but “MtfBwU” is a pretty strong password that is easy for you to remember, but hard for hackers to guess. Add some numbers and the strength increases.

A grocery list of 15+ items can be hard to memorize. Inevitably, something is going to get lost unless you have a memory device to help you out. For lists of over seven or so items, chunking might be your best bet.

Have you ever seen grocery lists that are organized by section? The list chunks together all of the produce you need to buy, dairy items that you need to buy, grains, household supplies, etc. This is a classic example of chunking. Remembering 15 items in an unorganized fashion can be tough. It’s easier to remember three sets of five items that go together.

Songs can get stuck in your head quicker than some text. One type of mnemonic device is making the information you need to learn into a sort of song or poem. You can do this by setting the information to music. The ABC song is a great way to remember information because the tune is so memorable. Or, you can simply use rhymes.

There are plenty of rhymes that we use to learn basic history or math information. How about this:

“Thirty days hath September….” You probably already know how to finish the sentence. “April, June, and November!” Other variations of this rhyme add on even more information about the months that have 31 or 28 days.

Here’s another one. Do you remember when Amerigo Vespucci set sail from Portugal? Probably not. But you probably remember when Columbus embarked on his big journey. Why?  “In 1492, Columbus sailed the ocean blue!”

And who could forget the rhyme used to help us with spelling?

“I before e except after c, or when sounding like a, like neighbor and weigh.” How many times have you repeated that to yourself while writing words like “piece” or “neighbor?”

Breaking down hard-to-spell words into phrases could help you spell them correctly. Here are two examples that I use when I get stuck with spelling.

The first phrase I use is Wednesday: “Wed Nes Day.” Sure, this one doesn’t flow so well, but it can help to break down the different parts of spelling “Wednesday.” You won’t forget the hidden E between the N and the S!

Here’s another one. If you’ve ever seen Bruce Almighty, you have probably heard this one before. Throughout the film, Jim Carrey’s character sarcastically says, “B-E-A-Utiful.” People who previously had a hard time spelling the word beautiful probably found that film to be very helpful!

Acronyms are all around us. You might not remember the term “Subscriber Identity Module,” but you do know what a “SIM” card is. It’s a mouthful to mention that a member of the Special Weapons And Tactics team was present at work, so most people just say “SWAT” team.

Medical terms are much more approachable when they are cut down into an easy-to-understand acronym. It’s quicker to tell someone that they have HIV rather than “Human Immunodeficiency Virus.” Telling a child that they have “Attention Deficit Hyperactivity Disorder” can sound quite scary - ADHD is much easier to communicate.

Terms like radar, CAPTCHA, and TED (as in TED talk) all come from acronyms. These easy-to-remember words and terms have become so integrated into our lives that you probably don’t even know all of them stand for longer phrases!

Other Types of Mnemonic Devices

These aren’t the only memory tricks in the book. The following techniques also fall under the broad category of “mnemonic devices”: 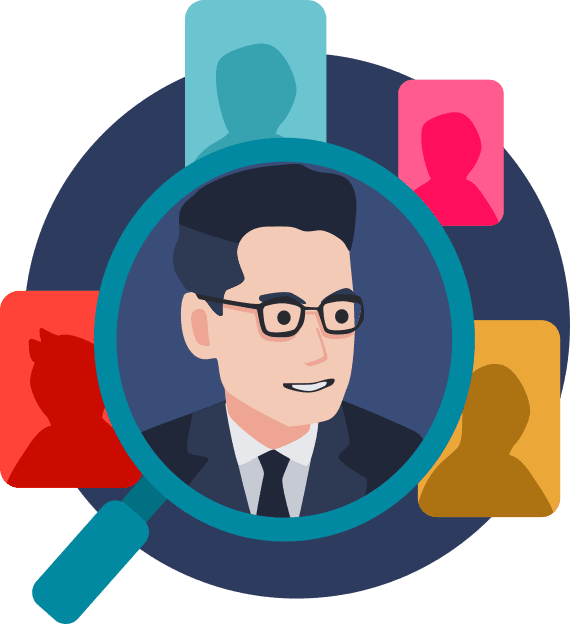 If you are interested in learning more about mnemonics, I recommend that you look to the experts. Yes, you can be a famous mnemonist. This professionals are known for their extraordinary memories. These memories aren’t the result of a strange gene or disorder: they are just skilled in the art of mnemonics.

One of the most famous mnemonists of all time was simply called “S” for decades. He is described in the book “The Mind of a Mnemonist” from 1968. While the book is slightly fabricated and dramatized, it tells the fascinating story of a man who, it seemed, could remember just about anything. Further reporting and research revealed that S, whose full name was Solomon Shereshevsky, was not a man with a photographic memory. He was just a skilled mnemonist.

Want to be the next Alex Mullen? It’s going to take a lot of work. But acrostics, acronyms, and other memory tricks can help you get there!