How attached are you to your romantic partner? Do you think these attachment styles have anything to do with how you were raised?

That may seem like a weird question, but psychologists have found that there is a strong connection between the relationship we have with our parents and how we approach romantic relationships as an adult. Adults display one of four different attachment styles. Your attachment style could make a big difference in how you view yourself in a relationship, how you treat your partner, or how you handle a breakup, so take the time to learn about them and make your dating life easier!

What Are Attachment Styles?

What Are the Four Attachment Styles?

Everyone falls under one of four attachment styles:

In earlier studies, only three attachment styles were identified; disorganized attachment came later. Each of these styles are defined by the behaviors that people display when the attachment figure (parent, partner, etc.) is present or not present. 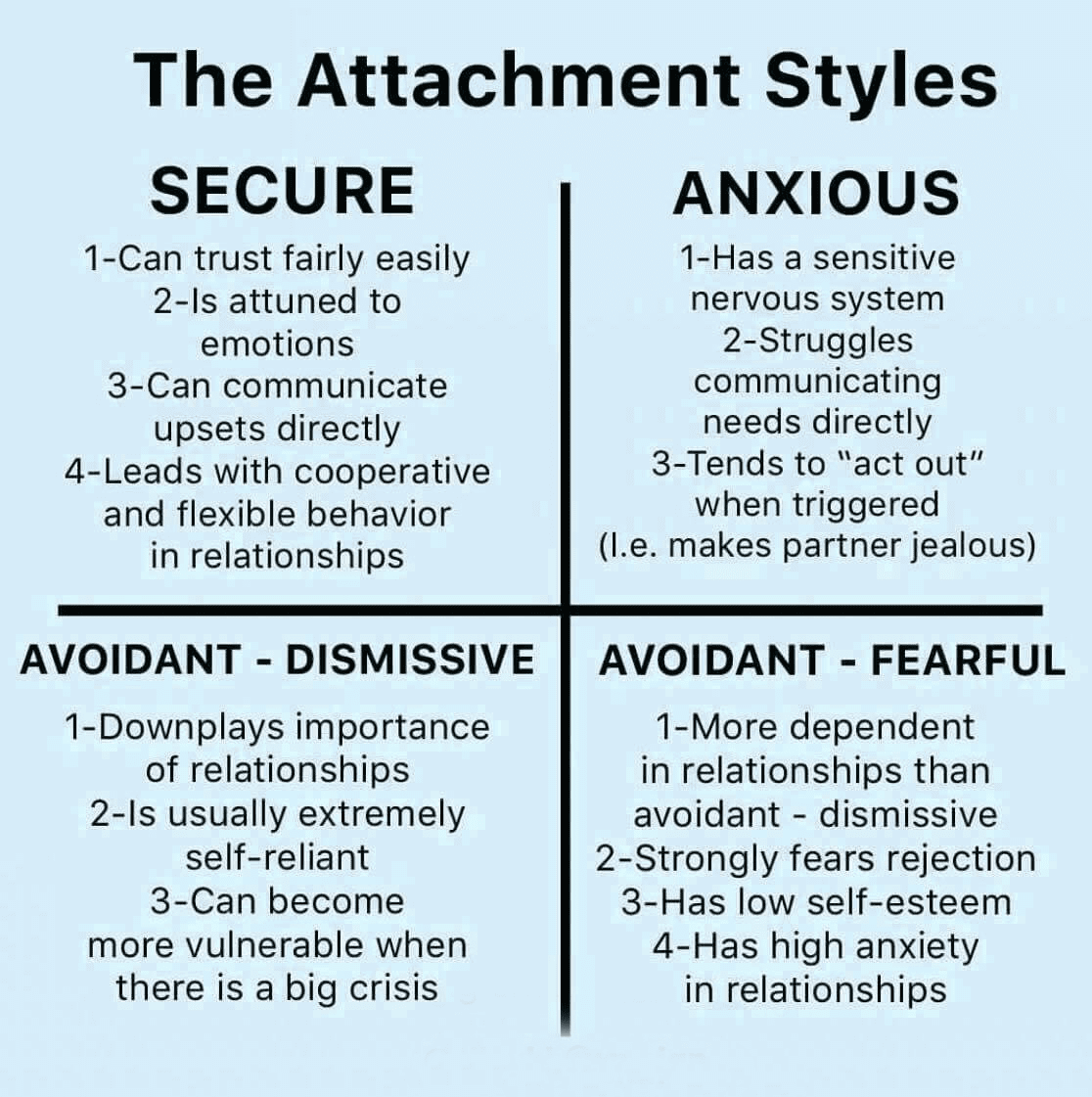 When a child feels secure, they are likely to display more exploratory behaviors. These behaviors include exploring the environment with ease, being sociable with others, and enjoying intimacy without anxiety.

From our first waking moments, our parents provide us with our basic needs. They feed us, put a roof over our head, and protect us. These needs form the base of Maslow’s hierarchy of needs – we seek these needs before we seek anything else.

Multiple people are most credited with discovering and identifying attachment styles:

John Bowlby was the first psychologist to study attachment styles theory. He didn’t classify attachment into different styles, but he did set the foundation for studying these styles. 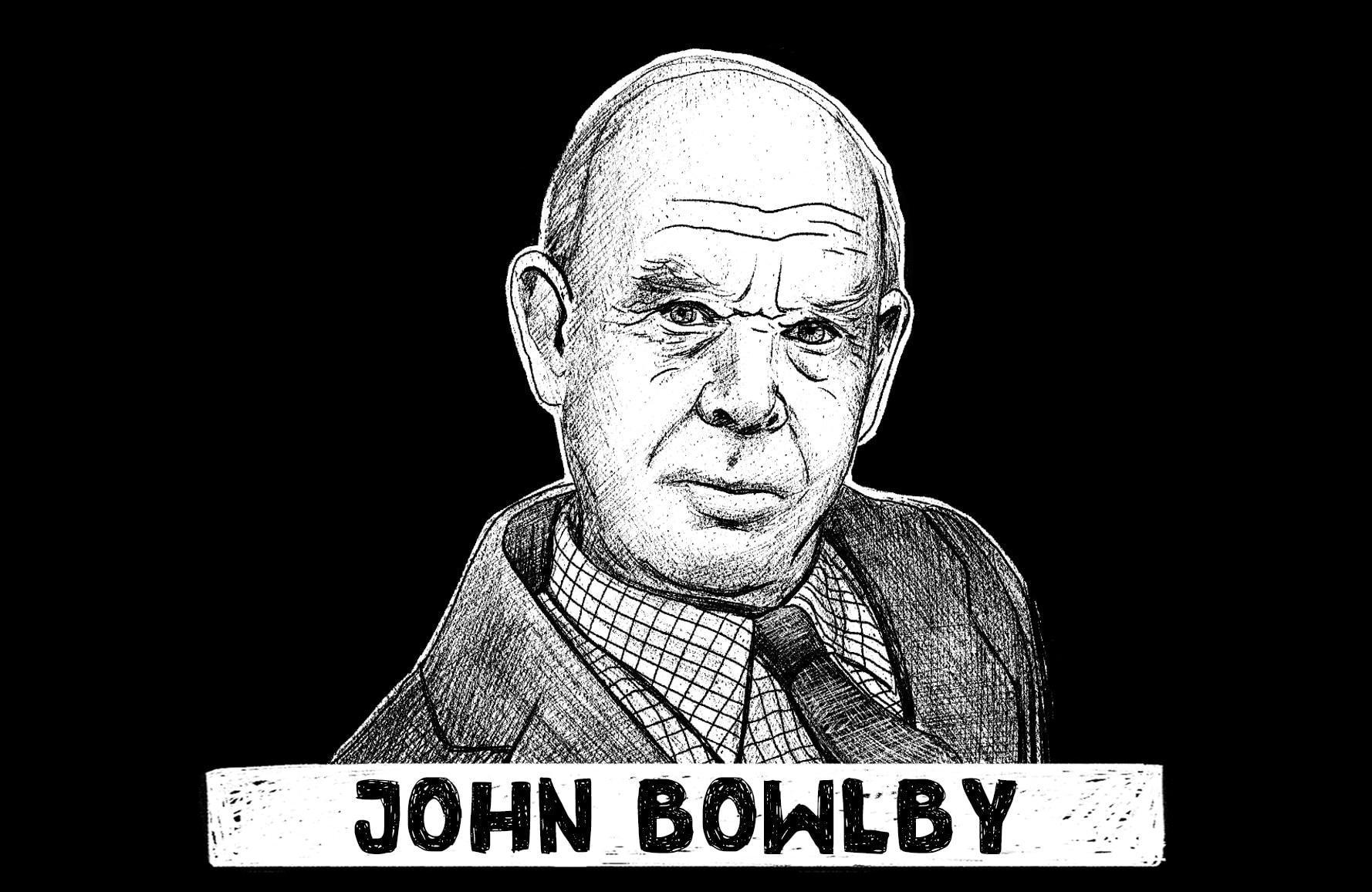 Bowlby wanted to know why children experienced separation anxiety when they were removed from their parents. Psychologists before him believed that separation anxiety and attachments to parents were learned behavior. Instead, Bowlby believed that attachment was an evolutionary process. After all, parents provide those basic needs that are necessary for survival. He theorized that children formed attachments as a part of an innate desire to stay alive.

When do these attachment styles start to form? This is the question that psychologists Schaffer and Emerson tried to answer in their experiments in the 1960s. They found that infants went through different stages in which they formed attachments to primary or secondary caregivers. By eleven months, the infants showed a preference or one caregiver over another. But they also start to form bonds with grandparents, aunts, uncles, or other caregivers. Once the infant has formed an attachment to one primary caregiver, they may display behaviors related to separation anxiety or stranger anxiety.

During the SSC, Ainsworth observed infants between the ages of 12-18 months through a one-way mirror. The children interacted with both their mother and a stranger in different scenarios. The scenarios lasted about three minutes each:

How did the infants react to all of these scenarios? Did they search for the attachment figure (mother) or were they content exploring the room and playing with toys?

Ainsworth recorded the infant’s behavior and how intensely the behavior was displayed.

The second group of infants, only 15% of the infants observed, were more distressed than the first. They resisted the stranger and even resisted the mother when she returned to the room. These infants were highly unlikely to explore the area around them. Ainsworth classified these infants as having a resistant attachment style, also known as the anxious attachment style.

The last group of infants, the final 15%, did not appear to be that attached to the mother. They weren’t distressed when the mother left and weren’t overly thrilled when the mother came back. Infants in this group seemed as comfortable with the stranger as they did with their mother. Ainsworth classified these children as having an avoidant attachment style.

Until the 1980s, these three different attachment styles were the most accepted. The disorganized-insecure attachment was added in 1986. Ainsworth did observe attachment behaviors that described children in this category, but they were not classified as their own group until Main and Soloman’s observations. These behaviors include:

Main and Soloman observed that these children typically experienced maltreatment and their trauma went unresolved. Due to the lack of closure on this treatment, the children were not sure of how to act and this frustration sometimes led to aggression.

Why Attachment Theory Is Important

Reddit user nenindis shared her thoughts on attachment theory in the FemaleDatingStrategy subreddit:

“My therapist recommended that I read ‘Attached’ by Amir Levine and Rachel S. F. Heller. At first, it seemed weird to me, but, then this book was a real eye – opener. Why? Because it helped me assess my own attachment style, alongside my significant other’s attachment style so that I can determine how compatible we are on a level that’s different and deeper to me than, say, liking the same kind of music. Sure, being a metal head myself with a metal head SO is great, but knowing our attachment styles (Secure and Secure) fit? It gave me extra confidence.

You don’t have to be a female to benefit from learning about attachment styles! If you want to form a deep connection with someone, it is worth understanding your attachment style and how that affects your compatibility with others.

Can Attachment Styles Change Over Time?

You are not doomed to one attachment style forever. Attachment styles can change as a person grows up. Not everyone with an absent parent is ambivalent or avoidant in nature. People with secure childhoods may also develop mistrust later in life!

If you are looking to change your attachment style, you are taking the right first steps. Awareness, mindfulness, and an open mind are key to acknowledging the attachment issues you have had in the past and trusting people more.

Consider taking the next steps on your journey to more secure relationships:

What Is Your Attachment Style?

Learn more about the your attachment style to figure out where you fit into Bowlby and Ainsworth’s theories of attachment. You can start with taking the quiz at the top of the page! Note that the results are not a “diagnosis” or set in stone. Attachment styles can change. Reach out to a mental health professional for more information about how your childhood may impact your adult relationships.