Trying to learn how to memorize classical conditioning concepts for your high school or college psychology class? This page is meant to be a resource to help you achieve that goal!

The idea of Pavlov’s dog pops up everywhere in pop culture. It appears in puns. If you ever had to study Brave New World in school, you might have heard references to Pavlov’s work come up in conversation. But can you explain the significance of Pavlov’s dogs and the concept that they brought to light? Let’s learn about classical conditioning.

What is Classical Conditioning?

Classical Conditioning is a method of learning that happens when two stimuli are paired together. In many cases, a biological stimulus is usually paired with a neutral stimulus. For the example below, Ivan Pavlov trains dogs to associate the sound of a ringing bell with salivating. 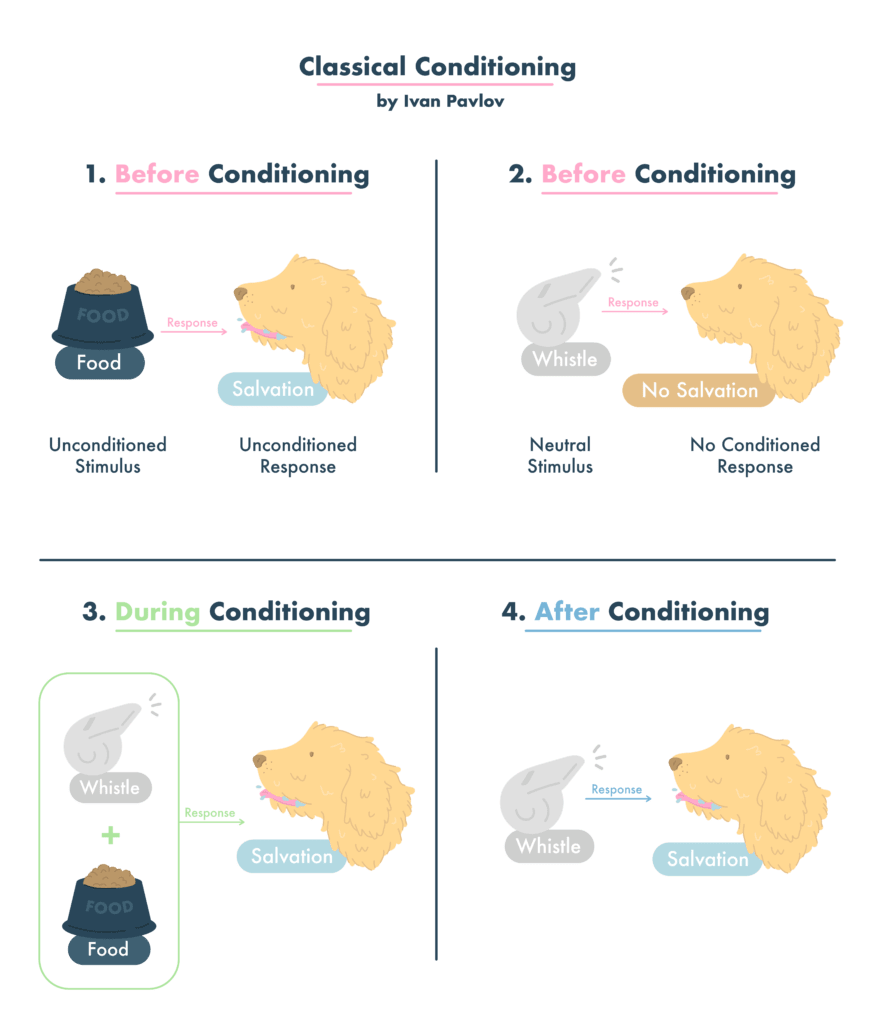 The idea of classical conditioning was first discovered through the work of Ivan Pavlov, a Russian psychologist. The participants in the study were dogs. Pavlov would ring a bell and then give the dog a treat. This process was repeated over and over again.

Things got interesting when the dogs started to “expect” the treat. At the sound of the bell, they would start salivating in anticipation of the treat. Now, the important thing to note here is that Pavlov was not trying to train the dogs to salivate. But this response came about through classical conditioning.

How Does Classical Conditioning Work?

The dogs began to salivate when they heard a bell. Before any studies began, the bell was a neutral stimulus. A neutral stimulus is any stimulus that has no associated response prior to training.  It elicited no response from the dogs. It was only after the dogs were exposed to food after hearing a bell that the stimulus becomes a conditioned stimulus. The dogs were conditioned to salivate when they saw the bell, a previously neutral item with a neutral sound. A conditioned stimulus is any stimulus that has been associated with a response.

The food also plays a role – it’s the unconditioned stimulus. An unconditioned stimulus is any stimulus which still creates a response, but not the one we are manipulating. When you take food out of the equation and into another situation, it will still cause a reaction in the participants. Seeing the food will make the dogs salivate in any situation, whether or not any sort of “learning” has taken place.

Let’s say you go to the doctor’s for a vaccine. Before the doctor gives you the painful shot, she touches you with a cotton ball to clean the area. When you get the vaccine, you feel pain and wince.

The next time you go to the doctor, they clean the area with a cotton ball. You jerk your arm away in an attempt to avoid the pain of the vaccine, even though the doctor did not give you the vaccine yet.

Classical conditioning does work on humans, but we often see cases of it when people are trying to “train” others in movies or TV shows. In “The Office,” Jim offering Dwight mints every time he hears an email notification is an example of classical conditioning.

If you are a parent, you might have noticed that your child has developed responses through classical conditioning, whether that was your intention or not. A child may get excited to go to church in the morning if they know they are getting fast food after. If you try to hide a toothbrush or anything they don’t like behind your back, they might get nervous any time they see you holding something behind your back. Fortunately, with humans, you can eventually reason with them and explain why or why not you may be performing a behavior that elicits a conditioned response. 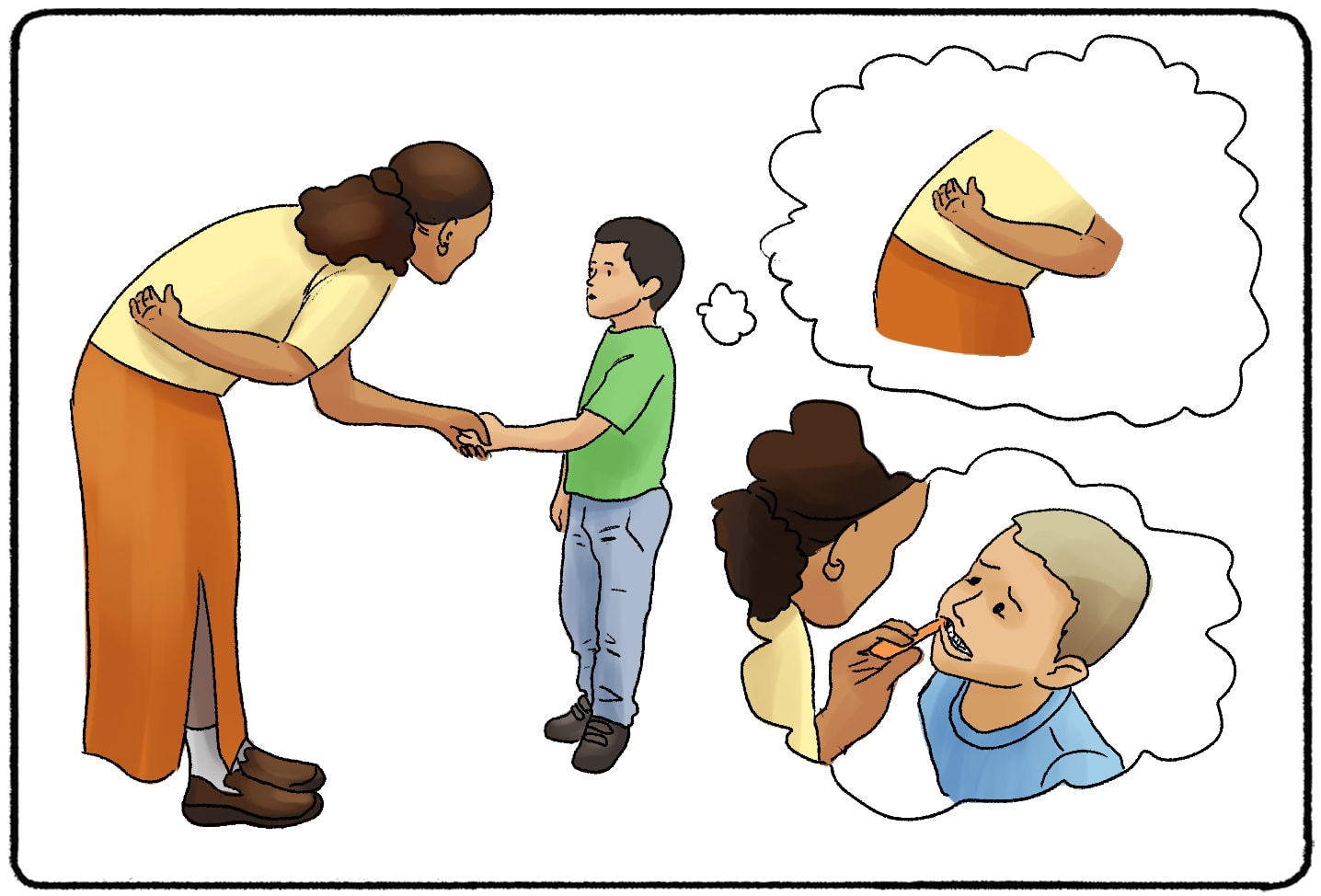 Teachers may use classical conditioning to help students come out of their shell or perform tasks that they normally wouldn’t perform. If a class of students did not like to stand up and present in front of the class, the teacher could create an environment where that task is rewarded and the child becomes more comfortable in standing up in front of the class.

On the DogTraining subreddit, you can find plenty examples of classical and operant conditioning! Check out this post from u/UselessBunch:

“Basic info: two rescue dogs, had them a couple years now, one was a street dog and is very skeptical about being manhandled or contained. Patience and treats have been key.

Now, to start, every time we walk, we sit down after in the doorway and wipe their paws. This serves two purposes: 1) clean paws = clean house, and 2) both pups are now totally desensitized to having their paws handled. It helps that the skeptical dog absolutely adores the taste of the lotion we use on their paws (it’s strongly lanolin based). We have to keep him away from the bottle!

What we added to that routine: buzz the grinder, they get a treat. Repeat a few times every paw wipe for most of a week. Slowly introduce it to the claws; they got a treat every buzz, regardless of contact, but when they let me actually buzz the claws for like a microsecond they got huge praise and a handful of treats (it’s just kibble, but don’t tell them that.)

We went at their pace. We were firm that we wanted them to do this, but we didn’t force the issue; especially at first, we let them opt out.

The skeptical boy was not a fan of the buzz buzz, but the treat motivated hound learned fast. So I let her get more treats than him. This made him unbearably curious. Today I had to take turns buzzing claws and I had to call an end, because they were perfectly willing to keep going!”

At the same time that Pavlov was conducting his studies, Americans were also working to discover similar ideas. In fact, an American psychologist named Edwin Twitmyer conducted a similar study to Pavlov three years earlier than Pavlov. Instead of participants, Twitmyer used humans. He sounded a bell and shortly after would tap a part of the patient’s knee to test their reflexes. After some time, the sound of the bell would result in a “knee-jerk” reaction.

Twitmyer did not receive the credit for his work like Pavlov. But one American psychologist did make a big name for himself due to his work on classical conditioning and behaviorism as a whole. His name is John B. Watson.

This study is famous for being crucial to the behaviorist movement – but also because it’s very dark. Watson used a nine-month-old baby, who he nicknamed “Little Albert” or “Baby Albert” to see if fear was an innate trait or something that was learned. He surrounded Albert with various objects, including a white rat, a monkey, a Santa Claus mask, etc. Albert didn’t seem to be scared of the stimuli, even the white rat.

Here’s where things get uncomfortable. Watson exposed Albert to one of the stimuli. He then banged a steel bar and a hammer – right behind Albert’s head – when the baby would touch the stimulus. Obviously, that sound terrified Albert. He became fearful of the rat and other stimuli that he associated with the sound of the bar and the hammer. Whenever the stimuli would come near him, he would try to crawl away and start crying. 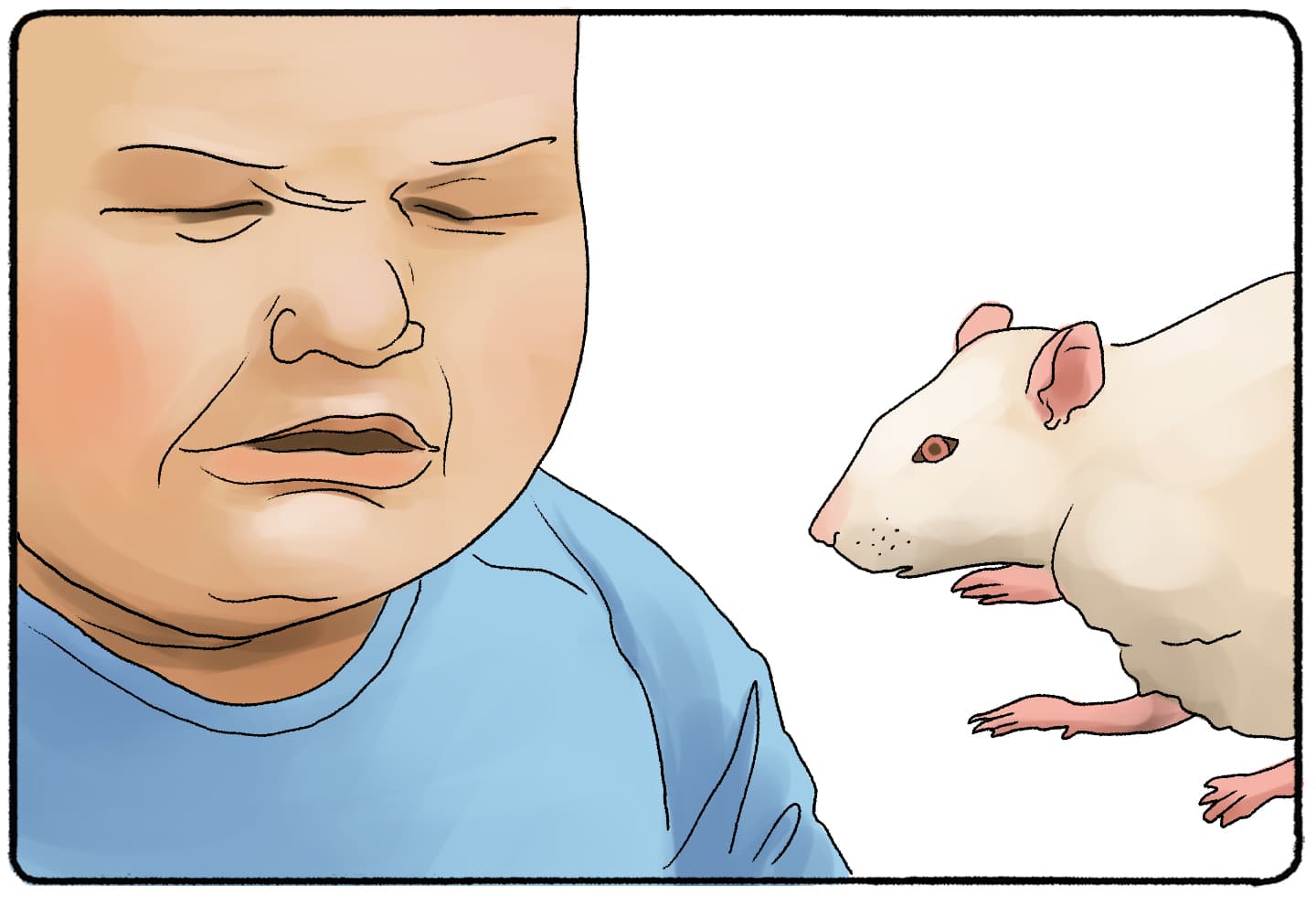 Let’s check in for a moment here. Do you remember the terms associated with classical conditioning?

The white rat is…now a conditioned stimulus. Formally, it was a neutral stimulus that did not provoke a response.

The steel bar and hammer are… unconditioned stimuli.

Behaviorism, while not very popular today, launched a treatment that is still used by today’s therapists. Mary Cover Jones is considered the Mother of Behavior Therapy after she attended a lecture by John B. Watson and attempted to undo the negative effects of classical conditioning.

Can You Use Classical Conditioning On Yourself?

Can you condition yourself? Can you quit smoking, concentrate on your studies, or train yourself to save money by ringing bells?

Yes and no. It is possible to condition yourself to form certain habits, but you have to be patient and committed to the idea. There is more to learning than behaviorism.