If you’re on this page, you’re probably doing some research on B.F. Skinner and his work on operant conditioning! You might be surprised to see how much conditioning you go through each day! We are conditioned to behave in certain ways every day. Our brains naturally gravitate toward the things that bring us pleasure and back away from things that bring us pain. When we connect our behaviors to pleasure and pain, we become conditioned.

What is Operant Conditioning?

Operant conditioning is a system of learning that happens by changing external variables called ‘punishments’ and ‘rewards’. Throughout time and repetition, learning happens when an association is created between a certain behavior and the consequence of that behavior (good or bad). 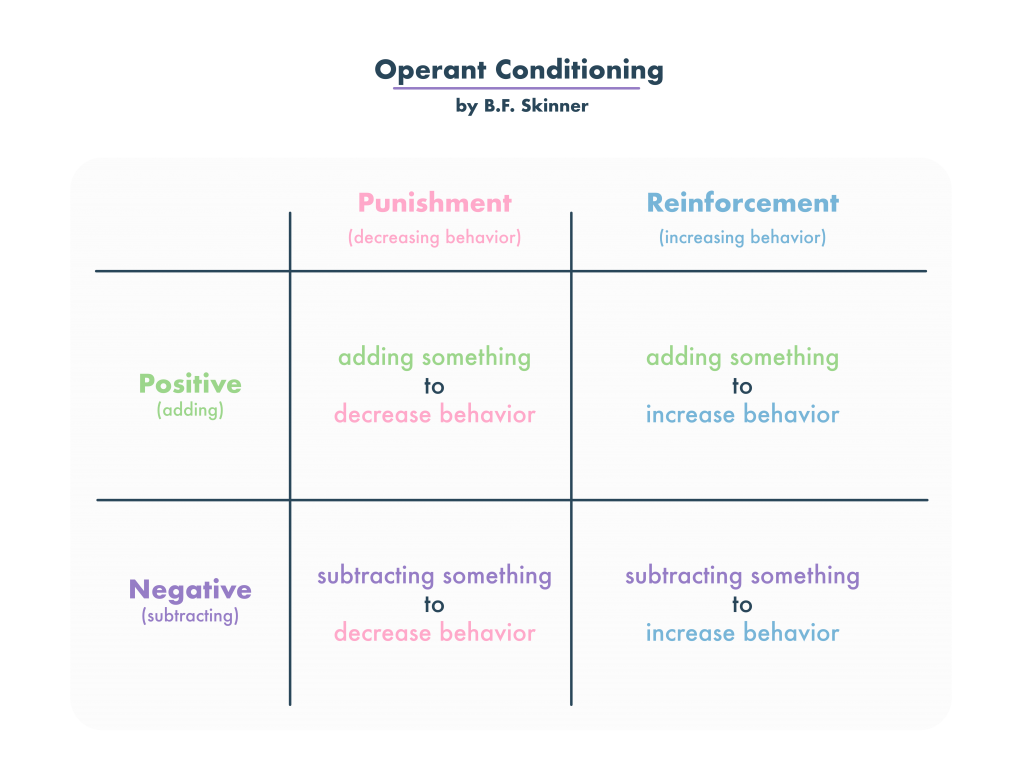 You might also hear this concept described as “instrumental conditioning” or “Skinnerian conditioning.” This second term comes from BF Skinner, the behaviorist who discovered operant conditioning through this work with pigeons.

He created what is now known as the “Skinner box.” The box contained a lever, disc, or other sort of mechanism. When the levers were pulled or the discs were pressed, something would occur. Food would appear, lights would flash, the floor would become electric, etc.

Skinner placed pigeons inside these boxes to record their responses based on whether or not they were conditioned to the responses that occurred after completing a certain task.

Based on how the pigeons understood the consequences of their actions, and changes to their behavior, Skinner developed the idea of operant conditioning.

How Does Operant Conditioning Work?

We can unearth the definition of operant conditioning by breaking it down. Skinner defined an operant as any “active behavior that operates upon the environment to generate consequences.”  Let’s say you get a big hug every time you tell your mother that she looks pretty. That compliment is an operant.

In operant conditioning, you can change two variables to achieve two goals.

Depending on what goal you’re trying to achieve, and how you manipulate the variable, there are four methods of operant conditioning:

Trying to remember the types of operant conditioning can be difficult, but here’s a simple cheat-sheet to help you.

Reinforcement is increasing a behavior.

Punishment is decreasing a behavior.

Escape occurs when a subject “escapes” a bad stimulus. In early experiments concerning learned helplessness, Martin Seligman put dogs in a room and subjected them to recurring shocks. If the dogs crossed to the other side of the room, they wouldn’t be shocked anymore. This is a form of escape – the subject can escape bad stimuli with their behaviors.

If you walked out into the cold without a coat, you would be faced with a punishment: you’re freezing and uncomfortable! The next time you go outside and wear a coat, you feel comfortable and warm. The behavior of putting on the coat allows you to actively avoid the “bad stimulus” and encourages you to wear a coat.

This example shows that not all forms of operant conditioning are due to someone’s intentions or manipulation. We learn to avoid or invite naturally-occurring stimuli based on what we observe in the aftermath of our behaviors.

Before I move onto the next form of operant conditioning, let me just sum up reinforcement. Remember, all types of reinforcement encourage you to repeat the actions that led to that reinforcement.

In Operant Conditioning, Punishment is described as changing a stimulus to decrease the likelihood of a behavior. Like reinforcement, there are two types of punishment: positive and negative.

Positive punishment is not a positive experience – it discourages the subject from repeating their behaviors through the addition of stimulus.

In The Big Bang Theory, Sheldon and the gang try and devise a plan for them to avoid getting off-topic. They decide to introduce a positive punishment to discourage that behavior.

The characters decide to put pieces of duct tape on their arms. When one of them gets off-topic, another person in the group would rip the duct tape of that person’s arm as a form of operant conditioning. The addition of that painful feeling makes their scheme a form of positive punishment.

The Response Rate is how often the subject performs the behavior in order to receive the reinforcement.

The Extinction Rate is quite different. If the subject doesn’t trust that they will get a reinforcement for their behavior, or does not make the connection between the behavior and the consequence, they are likely to quit performing the behavior. The rate of extinction is the rate at which that behavior ends after reinforcements are not given.

How fast does operant conditioning happen? Can you manipulate response and extinction rates? The answer varies based on when and why you receive your reinforcement.

Skinner understood this. Throughout his research, he observed that the timing and frequency of reinforcement or punishment made a big impact on how quickly the subject learned to perform or refrain from a behavior. These factors also make an impact on response rate.

If you think about the simplest form of operant conditioning, you are probably thinking of continuous reinforcement. When the subject performs a behavior, they earn a reinforcement. This occurs every single time.

“Ratio” refers to the amount of responses. “Fixed” refers to a consistent amount. Put them together and you get a schedule of reinforcement with a consistent amount of responses. Rewards programs often used fixed ratio reinforcement schedules to encourage customers to keep coming back. For every ten smoothies, you get one free.

The rate of response becomes more rapid as subjects endure fixed ratio reinforcement. Think about people in sales who work on commission. They know that they will get an $1,000 paycheck for every five items they sell – you can bet that they are pushing hard to sell those five items and earn that reinforcement faster.

Whereas “ratio” refers to the amount of responses, “interval” refers to the timing of the response. Subjects receive reinforcement after a certain amount of time has passed. If you get a paycheck on the 15th and 30th of every month, you are subject to fixed interval reinforcement. It doesn’t matter how many times you perform a behavior.

The response rate is typically slower in situations with fixed interval reinforcement. Subjects know that they will receive a reward no matter how often they perform a behavior. Often, people in jobs with steady and consistent paychecks are less likely to push hard and sell more product because they know they will get the same paycheck no matter how many items they sell. Other factors, like bonuses or verbal reprimands, may impact their motivation, but those extra factors don’t exist in pure fixed interval reinforcement.

This type of schedule isn’t always used because it can be confusing – in many cases, the subject does not know how many smoothies they have to purchase before they get their free one. ​

Think of slot machines. You never know how many times you will need to pull the level before you win the jackpot. But you know that with every pull, you are one step closer to winning. At some point, if you just keep pulling over and over, you will win the jackpot and receive a big reinforcement.

In this example, let’s say you work at a retail store. At any given time, secret shoppers enter the store. If you manage to perform the correct behaviors and sell the right items to the secret shopper, the higher-ups give you a bonus.

This could happen at any time as long as you are performing the behavior. This type of schedule keeps people on their toes, encouraging a high response rate and low extinction rate.

Is Operant Conditioning Trial and Error?

​Can Operant Conditioning Be Used in the Classroom?

Yes! Intentionally rewarding students for their behavior is a form of operant conditioning. If a student receives praise every time they get an A, for example, they are more likely to strive for an A on their tests and quizzes.

When you think about FFBE, what’s the first thing that comes to mind? Most of you would probably answer CRYSTALS, PULLING, RAINBOWS, EVE! That’s a clear example of Operant Conditioning. You wanna play the game every day and get that daily summon, because you know that you may get something awesome! And that’s also the reason why the Rainbow rates are low — if you won them too frequently, it would lose its effect.

Now that Mary knows the basketball player is in the game for fame, she uses this to her advantage. Every time he does something desirable, she uses this as a reinforcement for him to not only continue this behavior but also upgrade it. After their first date went well, they went to an event together. She knows he wants adulation and to feel important, so she puts the spotlight on him and makes him look good in front of others every time he goes out of his way to provide for her. This subconsciously makes him feel good, so he continues to provide her what she wants and needs (in her case, gifts, money, and affection.)

​​​Using Operant Conditioning ​On Yourself

Accountabilibuddies are best for setting up variable ratio and variable interval reinforcement schedules. That way, you don’t know when the reinforcement is coming. Tell your buddy to give you your video game controller back after a random amount of note cards that you write. Or, ask them to walk into your room at random intervals of time. If you’re studying, they hand you a beer. If you’re not, no reinforcement.