We receive rewards and punishments for many behaviors. More importantly, once we experience that reward or punishment, we are likely to perform (or not perform) that behavior again in anticipation of the result.

Who is B.F. Skinner?

Burrhus Frederic Skinner, also known as B.F. Skinner, is considered the “father of Operant Conditioning.” His experiments, conducted in what is known as “Skinner’s box,” are some of the most well-known experiments in psychology. They helped shape the ideas of operant conditioning in behaviorism.

Law of Effect (Thorndike vs. Skinner)

At the time, classical conditioning was the top theory in behaviorism. But Skinner knew that research showed that voluntary behaviors could be part of the conditioning process as well. In the late 1800s, a psychologist named Edward Thorndike wrote about “The Law of Effect.” He said, “responses that produce a satisfying effect in a particular situation become more likely to occur again in that situation, and responses that produce a discomforting effect become less likely to occur again in that situation.”

Thorndike tested out The Law of Effect with a box of his own. The box contained a maze and a lever. He placed a cat inside the box and fish outside the box. He then recorded the times in which it took the cats to get out of the box and eat the fish.

Thorndike noticed that the cats would explore the maze and eventually found the lever. The level would let them out of the box (and lead them to the fish) faster. Once discovering this, the cats were more likely to use the lever when they wanted to get fish.

What Is Skinner’s Box?

Skinner not only used Skinner box experiments to show the existence of operant conditioning, but he also showed schedules in which operant conditioning was more or less effective, depending on your goals. And that is why he is called The Father of Operant Conditioning. 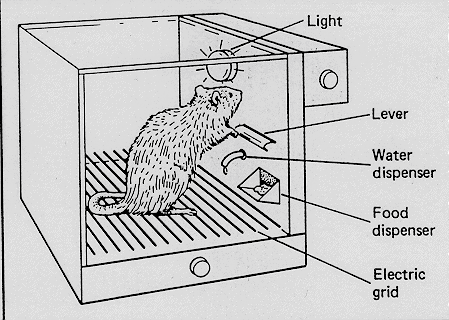 Inspired by Thorndike, Skinner created a box of his own to test his theory of Operant Conditioning. (This box is also known as an “operant conditioning chamber.”) Inside, he would place rats of pigeons. But Skinner took his research beyond what Thorndike did. He looked at how reinforcements and schedules of reinforcement would influence behavior.

Reinforcements are the rewards that satisfy your needs. The fish that cats received outside of Thorndike’s box was a reinforcement. In Skinner box experiments, pigeons or rats also received food.

Skinner would place the rats in a Skinner box with neutral stimulants (that produced neither reinforcement or punishment) and a lever that would dispense food. As the rats started to explore the box, they would stumble upon the level, activate it, and get food. Skinner observed that they were likely to engage in this behavior again, anticipating food.

But Skinner also looked at negative reinforcements. In some experiments, he would send an electric current through the box that would shock the rats. If the rats pushed the lever, the shocks would stop. Skinner saw that the rats quickly learned to turn off the shocks by pushing the lever.

Here’s what he found.

Fixed-ratio reinforcement: Let’s say you reinforce the behavior every fourth or fifth time. The response rate is fast and the extinction rate is medium. The behavior will be performed quickly to reach the reinforcement.

Variable-ratio reinforcement: Here’s where things start to get random. The behavior is reinforced, but at random times. (Gambling is a good example of this.) The response rate is fast but the extinction rate is slow. No wonder gambling is so addicting!

Variable-interval reinforcement: Last but not least, let’s say the reinforcement is given out at random intervals, provided that the behavior is performed. It could be five minutes after or seven minutes after. Skinner found that the response rate for this schedule is fast and the extinction rate is slow.

If you make conversation with a passenger while driving for Uber, you might get an extra tip at the end of your ride. More importantly, you are very likely to keep making conversations with passengers as you drive for Uber.

If your dog sits when you say “sit,” you might give him a treat. More importantly, they are very likely to sit when you say, “sit.”

These examples can be explained by operant conditioning, which was developed thanks to Skinner’s box.