Are you a psychology student wanting help putting the Atkinson and Shiffrin model of memory into your long-term memory? You’ve came to the right place! In this article, my goal is to provide you with everything there is to know about the Multi-Store model of memory.

Did you ever watch the romantic comedy 50 First Dates? In the movie, Drew Barrymore plays a woman who has short-term memory loss. She loses her short-term memory after an accident, and every morning, she “resets” and thinks that she is waking up to the day of the accident, a common case of anterograde amnesia.

For many people, characters like this first teach you about short-term vs. long-term memory. But are these actual parts of your brain? Can you lose short-term memory loss and end up stuck like Drew Barrymore’s character in 50 First Dates?

These are some of the questions that Richard Atkinson and Richard Shiffrin were asking as they conducted experiments in memory storage. (Although they were in the field at least 30 years before 50 First Dates came out.) They created the Atkinson and Shiffrin Model of Memory in 1968, which shows how we collect and store information.

This video will help you understand how your brain works to create memories and how you can ensure that the things you need to remember end up in your long-term memory.

Atkinson and Shiffrin’s Model of Memory consists of three locations where we store memories: in our sensory memory, short-term memory, and long-term memory. 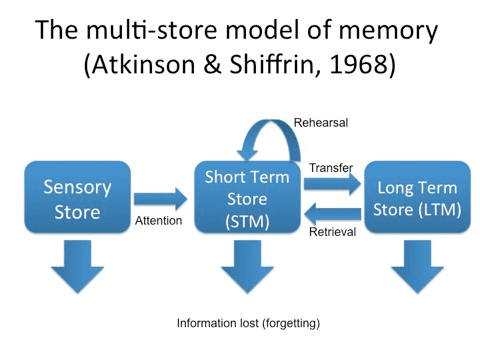 Duration: Up to 4 seconds

Capacity: Limited to the information from sensory organs

Encoding: Different stores for each sense

Take a moment to look at what is around you. Listen to the sound of my voice and to any background noises. Smell and taste – whatever is present. Feel your hands on your desk or your feet on the floor.

All of the data you just collected is sensory input.

It first goes into our sensory memory. Everything we hear, touch, feel, see, smell, taste – it may all end up in our long-term memory at some point. But most of it will be released and forgotten here. Our sensory memories can hold a lot of information, but only for a very short period of time. How short? It depends on which sense we used to gather that information.

Most information, including sight information stays in sensory memory for up to half a second.

Further studies on echoic memory, or the collection of things that we hear, can last for up to four seconds.

Once that time has passed, the most important data (and the data you gave your attention to) has moved to the short-term memory storage.

When we attend to information, then our brain knows to pop it into the short-term memory storage. This is where attention is important.

I told you to take into account your sight, the sounds you heard, etc. You have told yourself that the information in this video is important enough to remember. That’s all it takes for memory to head farther along into your memory.

Duration: Up to 18 seconds, can be longer with rehearsal

Capacity: The magic number of 7 plus or minus 2.

Encoding: Mostly auditory memory (You remember by repeating in your head)

If you are given a list of things to remember, maybe a list of names or items to buy at the store, the last items on the list are going to stick out the strongest in your short-term memory. After you read the list to yourself, you are most likely to recall those last few items first.

This is called the ​recency effect.

You might be asking, how can I guarantee that the items in my short-term memory make it to my long-term memory?

The answer is simple: repetition. Repeat the items you need to remember over and over again. If you are trying to remember a list of things in no particular order, switch up the order and repeat them to yourself again and again. Say things out loud as you write them down if you have to.

Atkinson and Shiffrin called this a “rehearsal loop”. Studying is a great form of this and allows students to move short-term memory into long-term memory.

Encoding: Semantic (We remember the meaning of information)

The things that our brain has considered to be most important, most likely things we have repeated to ourselves over and over again, head to our long-term memory storage.

There are many different ways to increase the likelihood of remembering something, as well as testing long term memory, but cognitive psychologists still don’t really understand how the entire process takes place. All we can do is guess and make models with hypothesis right now.

This Is a Simplistic Model

The Atkinson-Shiffrin Model is an easy one to remember, but it doesn’t tell the entire story of how people remember things. There are people who can remember things without a need for repetition.

Not all information, whether it appears important at the time or not, ends up in short-term memory and stays in the long-term memory. Of course, this model also fails to address how we lose some of our memories.

Here’s the biggest takeaway from this lesson: our short-term and sensory memories don’t last long. Our short-term memory storage isn’t unlimited. If you are determined to remember something, give it priority. Repeat it. Write it down and audibly repeat it again.

Keep this model stored in your long-term memory, but don’t neglect the findings that other studies have revealed since Atkinson and Shiffrin.

In 1974, Baddeley and Hitch came up with a Working Model of Memory that expands upon Atkinson and Shiffrin’s simplistic short-term memory storage process.

Additional studies show how you take a more active role in storing information long term aside from general repetition. If you are interested in learning more about this, look up Craik and Tulving’s work on the Levels of Processing Model from the 1970s.