The concept of a mind palace was made famous by Sherlock Holmes, though it was utilized for centuries before the legendary detective.

What is a Mind Palace?

A Mind Palace (originally referred to as the Method of Loci), is a memory device used to commit a large amount of information to memory by combining visual and spatial memory. Loci is Latin for “places”, and the ancient Greeks are credited for creating this method.

In fact, when we say “In the first place” or “in the second place”, we are actually referring to references of the Method of Loci.

From those early days forward, this method has been utilized by champions of the mind to perform incredible feats of memorization like memorizing number Pi to 100,000 digits. While it may seem like an extraordinary feat to create a functional mind palace, it is quite achievable with a bit of practice. 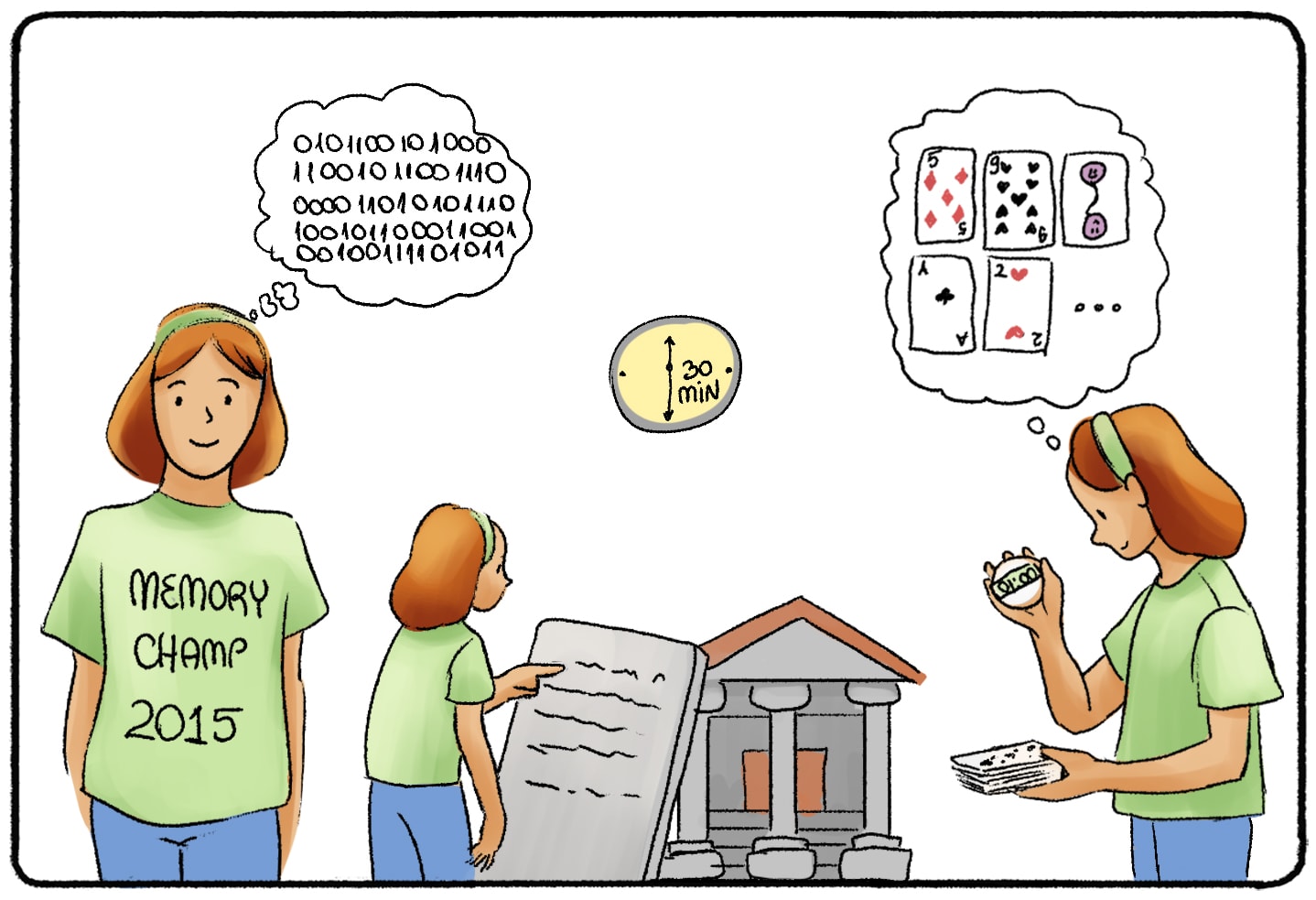 How Does a Memory Palace Work?

Here’s a simple example to show how a mind palace works.

Let’s say you’re ready to go to a friends house for a little get together. You head on over, but when you get there, you need to find a place to park. His block has a bunch of cars on it, so you have to park one block over. Next, you walk into the house and need to put your keys up. You sit them on the coffee table in his living room.

After more people show up and some time passes, you realize it’s getting warm, so you take off your jacket and throw it over the chair. The party ends and everyone had a great time. It’s now time to leave, but how do you know where everything is? You know you need to leave with your jacket, your keys, and of course… your car. Why? Because you came with them, they are permanent items for you.

You immediately remember where your jacket is – over the chair. Then as you walk out, you see your keys and are reminded that you had to park a block down.

The process of leaving that get-together is very similar to what you do in a mind palace. You see things you know you NEED – like your coat, keys, and car… and they remind you of other things – in this case where you put them.

How to Use a Memory Palace

With that in mind, here are five simple steps to creating and using your own functional mind palace.

1) Decide on the map’s location

The layout of your mind palace is crucial for it to function appropriately.

While it is possible to completely construct your own layout from your imagination, this will take extra energy that you don’t need to expend. The goal is to be so familiar with your palace’s layout that you can run through it in your mind without having to think about it.

In fact, humans have a memory system that is set up to be associative. This means we store information based on what it is associated to. Elaborative Encoding is how we encode short term information into long term memory with a mind palace, and it works by connecting one memory to pre-existing memories. Every memory has a memory attached to it. The more attachment it has, the easier it can be recalled.

With this in mind, some of the best locations to use would be:

The best possible location for a mind palace is any space you’re very familiar with.

On a side note, with the relatively new invention of video games, we have a new option available to us that would not have existed before. Video game maps and locations can be utilized as mind palace layouts, too. For example, the Zombies theater map in Black Ops is forever seared in my mind after running so many circles.

Once you have your palace’s location established and thoroughly memorized, you are ready to begin the process of adding information.

Now, assuming that you are able to walk through the palace in your mind without struggling to recall details, you are ready to start assigning permanent items.

You should select 4-5 items in each room. Optimal items to select are:

Try to avoid selecting two of the same object in each room. For instance, if you have a dining room, do not use each individual chair as separate items. Instead, utilize the entire set as one item. This will prevent your brain from getting confused when you add information.

To give an example of what I mean, in the first room of my mind palace (my living room), is filled with a rocking chair in the corner, a sofa next to that, then a tall standing lamp. There’s also a love seat, a fireplace, a bookshelf, and some decorative wall art. This is a fairly detailed room with multiple items, but it’s not too much to remember because the outline is already in my long term memory. It also helps that the items are different enough that I don’t have trouble differentiating them.

Once you have this step down, you’re ready for the next step in the process.

This is the step that catches most people off guard. In short, you must order each item in your room, and follow that order EVERY time you use your mind palace.

When I first learned of the mind palace technique, I had an unrealistic concept of walking aimlessly through my palace and seeing things that I wanted to remember. While this seems interesting, and is partially true, it negates how a mind palace truly functions.

A mind palace’s functionality lies largely in repetition and visual cues. So now that you have your mind palace memorized, and the items within it selected, you have to establish a route that you will always walk when recalling things. In other words, you must order your items. Some people find it easier to give a number to each item in their memory palace.

For instance, I always enter through my front door, then I always turn right and work around my house in a counterclockwise motion. I work counterclockwise in every room as well until I finally make it back around to the beginning of the route.

Once you have a route through your mind palace determined and know it better than the back of your hand, you are ready to start adding information. A simple way to know if you’re ready is to quiz yourself. “What is the third item in the second room?” If you can think of it quickly without going through all the rooms, you’re ready.

This is the part you were waiting for, actually adding information to your mind palace. Now that we have a mental model of the rooms memorized, you must associate something to each object in each room.

Something to keep in mind while adding information is that the mind palace is a visual memory technique, so you have to convert whatever information you want to memorize into a visual form. This means even if it’s numbers, cards, test information, or a speech; you must turn it into visual information.

There are a few techniques that have already been created to help you do this “conversion”, but many people do it with their own creativity. The first step in adding information is to convert it to an absurd visually/sensory stimulating image.

After you have done this to your information, you can begin to place it throughout your palace along the route you take. This is where the route begins to become a useful tool.Say you are memorizing a deck of cards, and the first card is an Ace of Hearts. Well, you would then take the image you have created for an Ace of Hearts and associated it with your first item in your first room. So for mine, the Ace of Hearts is represented by a monkey with a bright red bum going crazy (it sounds insane, but it’s visual and memorable).

The first spot in my palace is a small coat closet just to the right of the front door. With that in mind, I walk into my mind palace, and look inside that small closet to see a monkey with a bright red bum going crazy… the Ace of Hearts.

I would continue this until I have placed the entire deck of cards throughout my mind palace in the order in which I wanted to have them memorized. Then, when I want to recall them, I go back through my palace and see the images on each spot. Those images act as a memory trigger for the card they represent.This process can be carried out with many forms of information. What makes the palace powerful is the repetition of the same location and route, and the visual/sensory imagery. However, there is a concern that most people have when in regards to the mind palace.

“What if you have added some information to your mind palace, and when you try to add more information, your brain gets confused with the two different lists of things?”

Well, the answer to this is simple, but not easy.

5) Create more than one

Yes, the answer is that simple. You are no doubt familiar with more than one location in the world, so you can create more palaces.

Many memory champions will create multiple palaces in their working memory for various commonly memorized topics.

For example, one will be dedicated for cards, one for numbers, one for lists, one for speeches. The difficulty for this is that you have to dedicate even more time and effort to create and memorize each palace.

If you’re thinking to yourself that this sounds like a lot of memory work, just to create the systems that are supposed to help you with your memory, you are correct. This is why many people fail to use the memory palace effectively. They haven’t dedicated enough time towards it beforehand to use it effectively later.

However, with these five steps, you can now begin building and utilizing your mind palace(s).

It takes work and dedication to begin flawlessly using it to its fullest. Ease and speed will come with time, and memorizing more complex information will become easier as you learn more techniques for tethering more information.

Start by creating one palace, and move forward from that one palace. 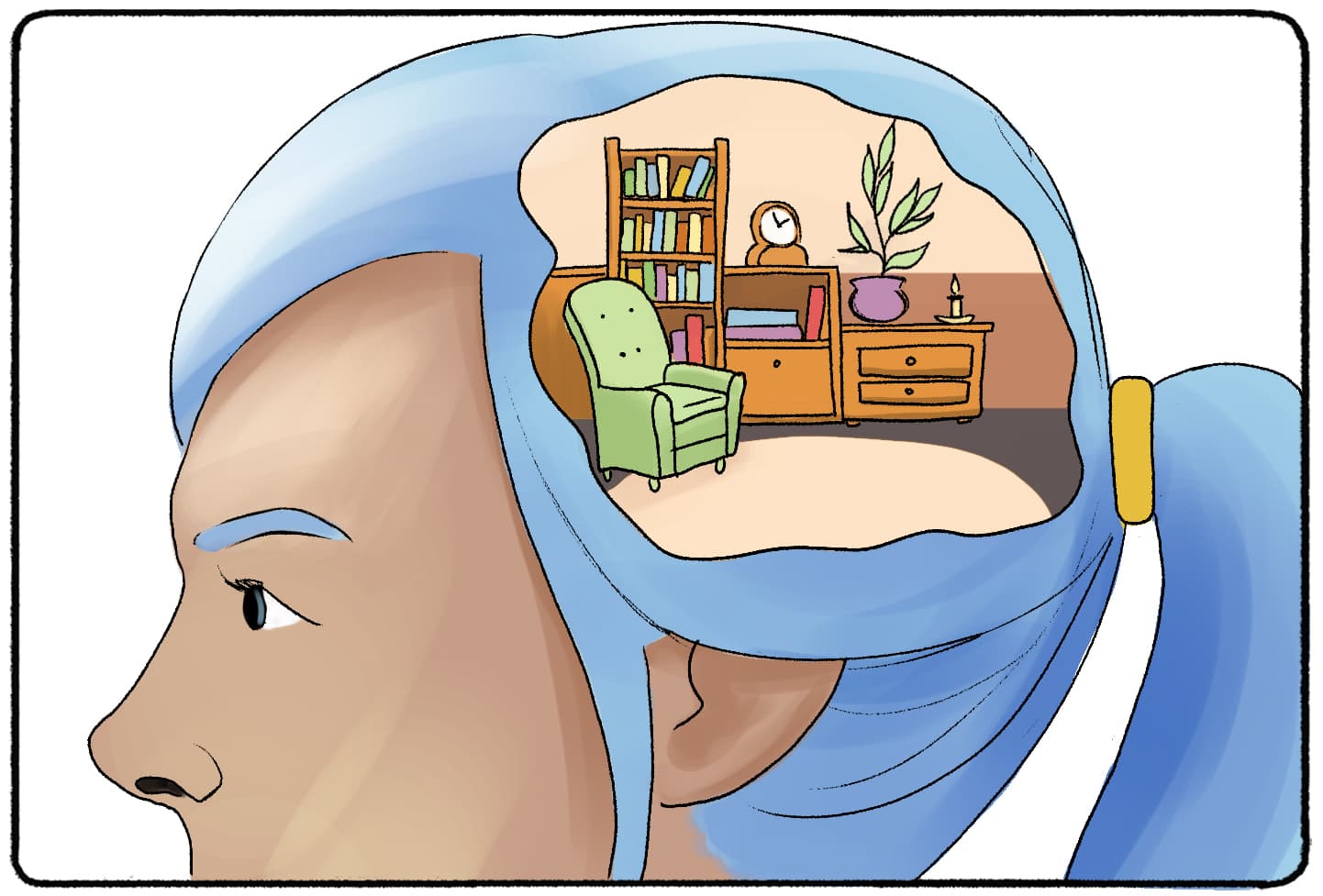 Is Using a Memory Palace Effective?

“I used it in the past to memorize a little over a 100 countries with their capitals and continent, but It only lasted a few months. It is worth mentioning that I did not have a firm grasp of the technique.”

The mind palace technique isn’t for everyone. There are many techniques that you can utilize to improve your memory capacity and effectiveness. If this technique doesn’t work best for you there are others that might be a better fit, but those techniques can be found throughout this website.