You’ve got a choice between two dates.

Who would you like to go on a date with?

Did you say the second person? You’re not alone. Did you notice that both people were described with the same words, just in a different order? Then you might have heard of this study before.

In 1946, Soloman Asch asked participants to rate people based on the collection of words that were used above. People rated the second person much higher than the first person. His results went on to support the Primacy Effect.

The Primacy Effect is part of a larger theory about how we store information and the psychology of memory. If information is presented to us in a list, what information is most likely to stick? Does that order matter in the first place?

What Is the Primacy Effect?

Here’s the basic idea of the primacy effect: when presented with a list of information, you are most likely to recall items at the beginning of the list. These items are more likely to end up in your long-term memory than items at the middle or the end of the list. 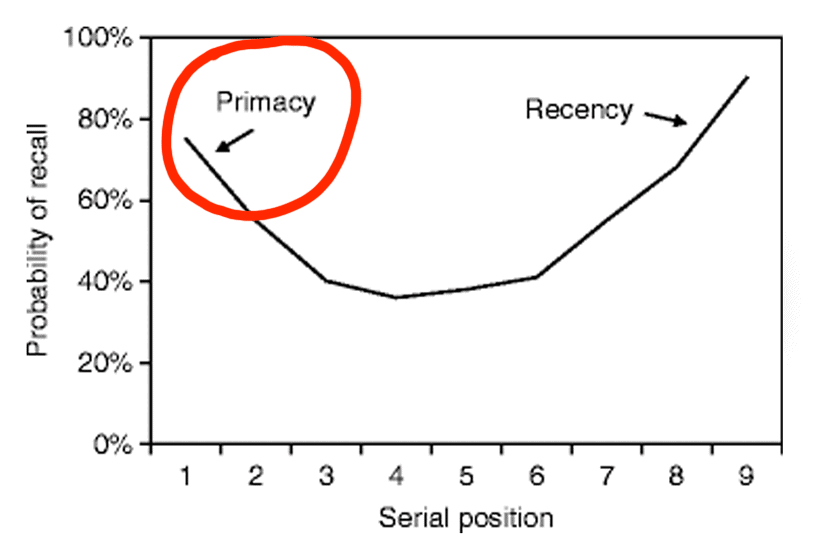 It’s a simple idea, but there are a lot of factors that play into the primacy effect:

The Primacy Effect also ties into another concept in psychology concerning first impressions.

Let’s say grew up remembering that a big-screen TV cost $800. That was your first impression of buying a big-screen TV. No matter whether this was a reasonable price or not, it’s the first one you remember.

Every time you buy a big-screen TV, you’ll think back and compare current prices to that flat-screen TV. You are anchored to this idea because you remember it so strongly. Changing your ideas about prices, like changing your impression of someone, is not an easy journey. And this is partly thanks to how we store and process information.

Buying a TV for $1100 will seem like you're getting ripped off, while spending $500 may seem like a deal. Our brains are very bad at calculating inflation and the true value of a purchase.

The same works with first impressions when meeting people. The first time someone meets you will stick in their mind a lot longer and be more memorable throughout time due to the primacy effect.

I mentioned an interesting study conducted by Miller and Campbell while explaining the Recency Effect. What I didn’t mention was a Primacy Effect also took place in some of the trials.

Miller and Campbell presented participants with two arguments: one for a plaintiff accused of a crime, and one against. In some trials, they switched the order in which the arguments were presented. In others, they delayed the time between hearing the two arguments and asking participants to make a decision.

Coming to an interview or a meeting late is certainly not a good impression. In fact, it’s one of the worst things you can do if you want to get a job. A survey by Simply Hired revealed that 93% of managers viewed coming late unfavorably - topping the list of things you shouldn’t do in an interview. Dressing too casually or having grammar mistakes in your resume or cover letter were also examples of ways to create a bad first impression.

Once you come late or present a bad application, the hiring managers are likely to have written you off already. And as they circle back to your application as they make their decision, they are most likely to remember that you came late or made a bad first impression.

When you vote, it’s important to read over the list of candidates and learn about their policies. The order in which you learn the names of the candidates, however, could have an impact on how you vote. Multiple studies from recent years show that the candidate listed first, who is likely to be listed first online and in other resources, was more likely to win than any of the other candidates. Politicians who open a debate with a strong argument are also more likely to have that message heard as opposed to the arguments they make in the middle of the debate.

The Primacy Effect can affect how we remember and view the world in many ways. The Primacy Effect is closely linked to the Anchoring Bias. Every time we “anchor” onto a piece of information, we let that first piece of information stick in our minds more than anything we learn after. If we first see that gas is $1.00, and then later see gas priced at $1.50, $1.10, and $.80, we are still most likely to remember that $1.00 and base our judgements off of that information.

How to Use The Primacy Effect

Marketing and sales professionals use the idea of anchoring to get in the minds of their customers. They can also use it to position information in a way that benefits their business. You can use the primacy effect whether or not you work in sales.

Writing a speech? Make a list of what information you want to communicate to listeners. Put the most important information at the top of your list and use this list to write your speech.

Need to study? Switch up the lists of terms and concepts you need to memorize. If you stick to the same list, you’re likely to remember the top items - but the middle items might not be so easy to recall during test time.

Heading on a date? Don’t forget to make a good first impression. If you communicate (through body language or your tone) that you’re confident, this impression will continue to stick in your date’s mind throughout the evening.

What about items at the end of a list? Do your impressions matter less and less as you build relationships with others?

The Primacy Effect tells us a lot about memory storage, but it’s not the whole story. Dive deeper into the world of memory storage by learning about The Recency Effect. Items at the end of the list are just as likely to stick in your brain - but they tend to be stored in a different place and process. Watch my next video about the Recency Effect and why entering with a positive first impression is just as important as leaving on a positive note.

Both the Primacy and Recency Effect make up a theory on the Serial Position Effect, which shows through many studies that people are more likely to remember the first and last parts of a list than the middle.