Would you be surprised if I told you that I could guess your political views with just a little bit of information about your personality?

You might already know that personality traits make a big impact on behavior and judgement. People relate to others who have similar personalities and hold similar judgements. If people see themselves in a person on the campaign trail, they are more likely to trust that person and even vote for them as president.

Once you take a Big Five personality test, you might start to see connections between your personality traits and the views you hold and the votes you have cast.

Let’s talk about these connections and how you can use personality traits to predict someone’s political stances.

We won’t dive right into the 2016 election just yet. I want to start off by talking about how your personality influences your political involvement and activity.

People who score high in extraversion are typically more likely to participate in marches, rallies, and protests that involve big groups of people.

Another interesting thing that can influence your political views is if you’re infected with a parasite. People with parasites in them want to prevent more parasites from getting in, which subconsciously increases their level of conscientiousness, thus making them more conservative. Studies have also found that the presence of parasites or famine in an area is a positive predictor of people in that area starting to support the creation of an authoritarian system of government. People with parasites in them have also been found to be more xenophobic, or against immigrants.

Do your personality traits influence whether you are more conservative or liberal, Republican or Democrat? Researchers have found trends that connect the two.

For example, people with score high in conscientiousness tend to strive for more order, a tendency that is associated with conservative values, they like rules. Conversely, people who score high in creativity and openness to experience tend to be more liberal.

Other studies have found less significance behind your level of extraversion and neuroticism when it comes to your political views.

How do Big Five scores match up with the results of the last Presidential election?

In the 2016 United States presidential election, people with a high level of openness to experience and also a high level of neuroticism tended to vote for the more liberal Hillary Clinton.

People with a high level of extraversion and conscientiousness tended to vote for the more conservative Donald Trump.

There were no significant tendencies for people with a high level of agreeableness, but in general, people who scored high for agreeableness were more likely to vote for Trump. 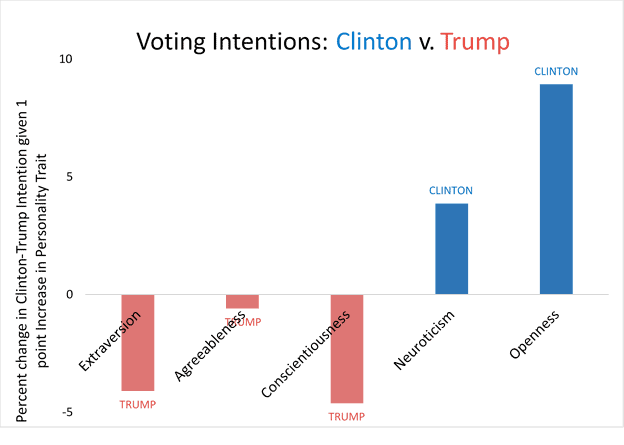 To demonstrate this, I want to talk about how personality traits influence where you choose to work. Workplace culture can have a big impact on political opinion. Have you ever noticed that the people around you and working with you often share your political views?

Team leaders are generally discouraged from showing political bias when choosing who to hire, but they are encouraged to pick people that they believe to be a “good fit” their company’s work environment. When it comes to “fitting in” with workplace culture, the applicant’s personality traits are a big indicator of what kinds of things they might want and seek out. These are the same traits that can influence political opinion.

Let me give you some examples of this.

People who score high in extraversion typically work best in an environment that is comfortable with ambiguity. Team leaders may look at a problem many different ways and ask for multiple solutions to one question. The people who work well in this environment also tend to be more adventurous. The same preferences apply for people who are more liberal. As we mentioned earlier, more liberal people do tend to be more open to experience.

Conversely, people who score high in conscientiousness tend to like a single answer for each problem. They also tend to be more cautious and risk-avoidant. Typically, these personality types tend to be more conversative.

People who lean to the left (aka, are more liberal) are more comfortable questioning and challenging authority. They feel more comfortable in a wok environment that encourages this behavior and has a looser hierarchical structure. Liberals, and people who score high in openness to experience, tend to thrive in an environment that heavily focuses on the present-future.

More conservative individuals thrive in a past-present oriented work environment. Experts believe this trend is explained by a conservative person’s general inclination towards stability and tradition.

Meanwhile, people who score low in these traits, and have more conservative views, tend to prefer an individualist work culture, where they can do their own work without having to worry about sharing with, helping, or trusting others.

So your personality defines what kinds of workplace cultures you’d like to apply to. Since others with similar personalities will be attracted to similar jobs and cultures, it’s likely that you will interact with like-minded people at work. You may also find that you have come from different parts of the country or the world to live in an environment and work in a culture that fits your personality.

Don’t believe me? Take the quiz and see for yourself! Let me know in the comments if my quiz guessed your political opinions!

“An Analyses of Political Discrimination in the Workplace – Emory Law.” http://law.emory.edu/ecgar/perspectives/volume-5/perspectives/google-political-discrimination-workplace.html. Accessed 23 Feb. 2019.

“The Association between Personality Traits and Voting Intentions in ….” 23 Sep. 2016, http://evidencebase.usc.edu/the-association-between-personality-traits-and-voting-intentions-in-the-2016-presidential-election/. Accessed 18 Feb. 2019.