Have you ever heard of a personality test titled “The Dark Triad“? Sounds a bit evil, right?

When people take personality tests, the results are typically positive or neutral. There is nothing particularly disappointing about your Myers-Briggs score; “thinkers” or “perceivers,” for example, are relatively neutral terms. But not all traits are positive. Some traits are negative and are generally attributed to people who do negative things.

The Dark Triad looks at these negative traits. Psychologists have developed tests to determine whether or not these traits exist and potentially spot dangerous people.

Want to learn more about the Dark Triad? Paulhus and Williams’ research on the subject is a great place to start. You should also consider reading This is more recent book on the subject.

What is the Dark Triad Test?

Like most personality traits, The Dark Triad exist in all people to certain degrees. Everyone has some of these nasty and ‘evil’ qualities. In fact, researchers show that some degrees of these traits indicate a potentially good business leader or bright person. But the people who are more “dark” than others are more likely to act in ways that hurt others.

So what are these scary Dark Triad traits? They are Narcissism, Psychopathy, and Machiavellianism. Each of these traits have a raw score of 0-4, but the are usually measured with a percentile. For example, if you get a narcissism score of 40, that means that 60 people are more narcissistic than you. 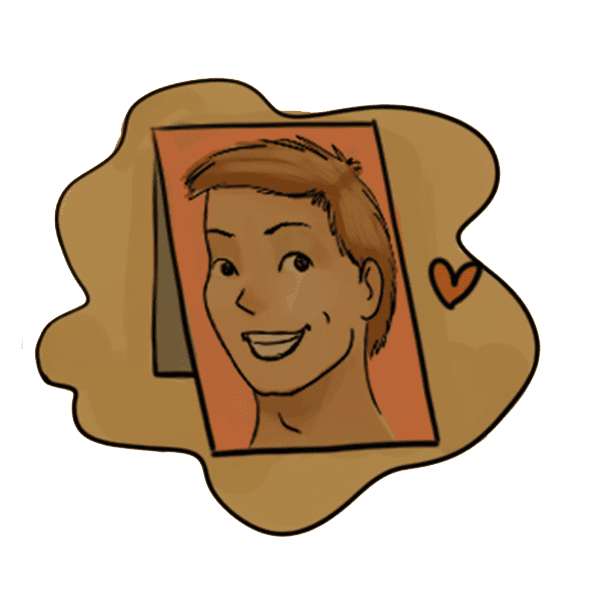 Narcissism is an inflated sense of self. Narcissists believe that they are a superior person to others and require that people constantly recognize them for their superiority. They don’t just crave attention or work to earn praise…they expect this attention or praise, even if they don’t accomplish much.

As a result of these beliefs, narcissists will insist on having things that “meet their standard.” They may use dishonest means to get what they want. Narcissists will excuse their poor behavior because they believe they deserve the things they want.

Here is the data I have collected from the quiz above with around 20,000 test results from the raw data of the Psychopathy trait: 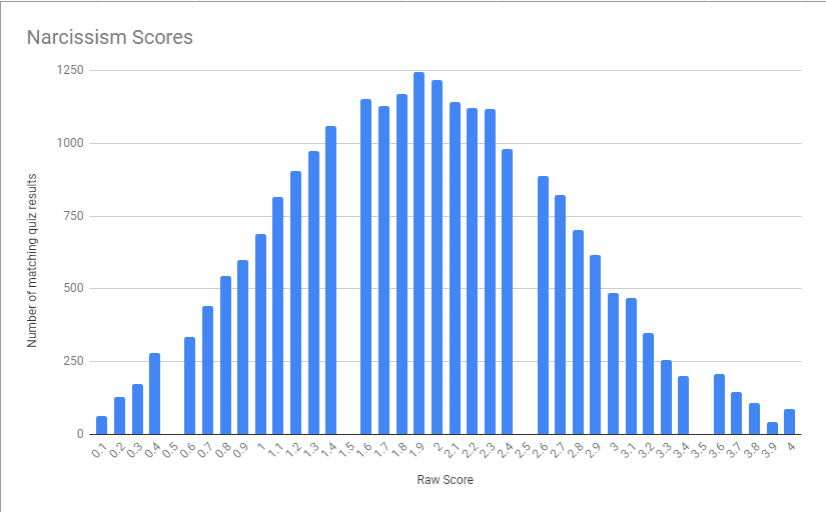 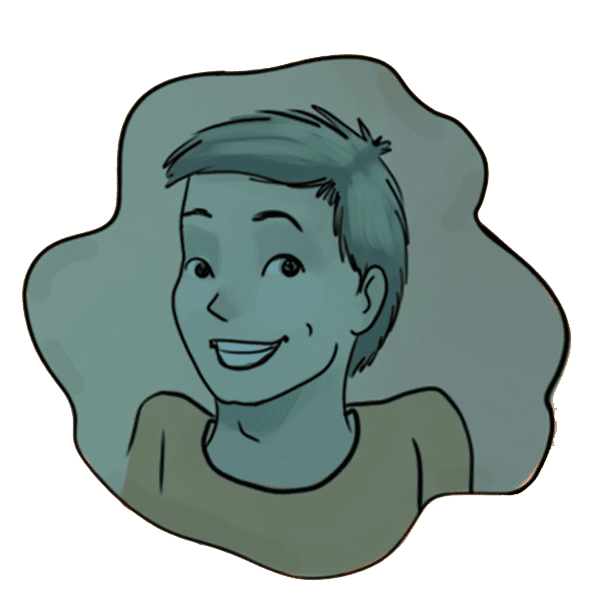 People have a hard time pointing out a psychopath because they can also be excessively charming. Ted Bundy is a classic psychopath; while people believed he was really charming and kind on the outside, he never seemed to show remorse for brutally killing over 30 women in the 70s.

Here is the data I have collected from the quiz above with around 20,000 test results from the raw data of the Psychopathy trait: 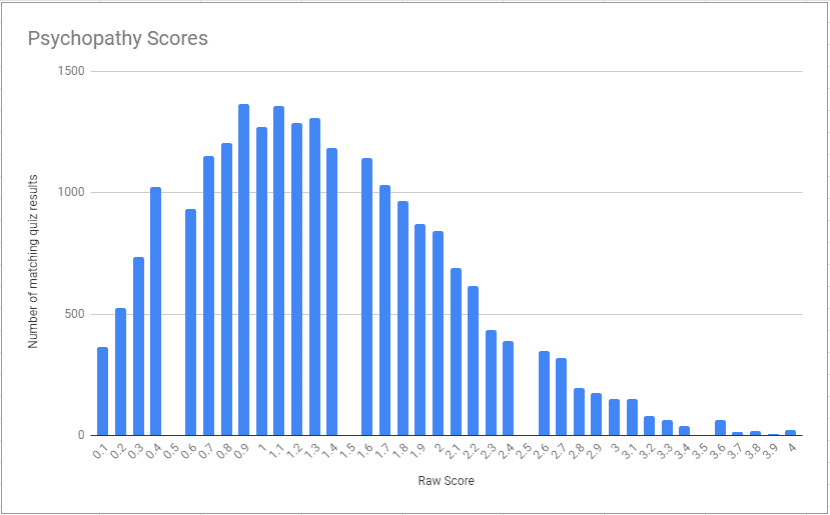 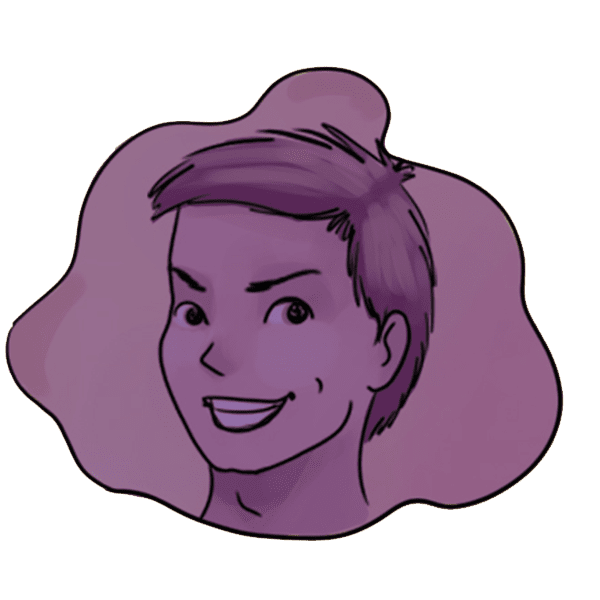 Machiavelli was an Italian diplomat and author from the 1500s. He is most known for writing The Prince, a book that offers advice on how politicians should rise to the top by any means necessary. In the book, he says, “A prince never lacks good reasons to break his promise.” Even if a leader is not a generally dishonest or manipulative person, they should use these tactics in order to get the power and position that they desire.

People who score high on the Machiavellianism scale haven’t just taken this advice; they live by this advice every day. They are master manipulators who know what to say and do to get their way. Like psychopaths, they can be very charming on the outside…but only as a means to take advantage of others. Like narcissists, they think they deserve the things that they want and use that to justify their terrible actions.

Here is the data I have collected from the quiz above with around 20,000 test results from the raw data of the Machiavellianism trait: 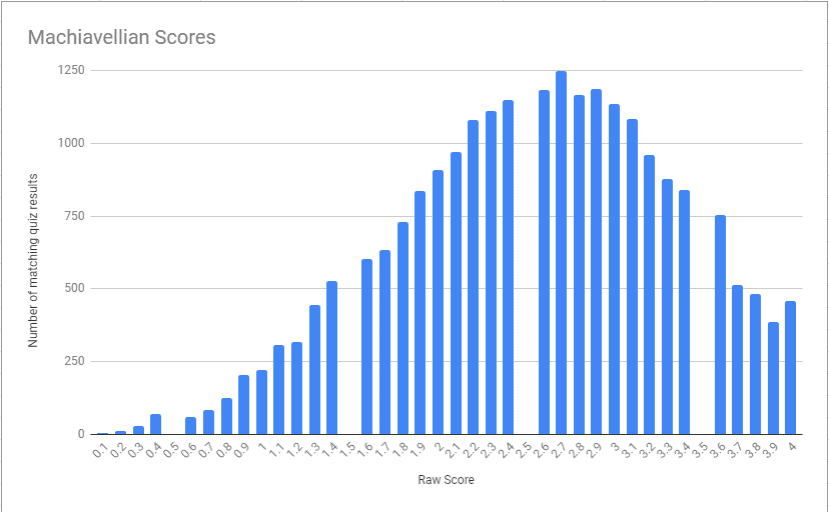 The Dark Triad and The Big Five

In Paulhus and Williams’ original article about The Dark Triad, they argue that when it comes to these traits, “their only common Big Five correlate was disagreeableness.” Later studies have shown other connections between The Big Five and The Dark Triad. For example:

This same research, conducted in 2011 at the University of Western Ontario, suggests that the presence of these Dark Triad traits is largely genetic. This means that nature, rather than nurture, is more likely to cause these traits. Trauma or environmental factors can cause people to commit crimes and do bad things, but the tendency to commit crimes without remorse and manipulate people is largely inherent.

If Dark Triad traits truly are genetic, this means further research can help us identify potentially dark and dangerous people before they start to act out and cause harm to others.

Take The Test With Your Friends

It only takes about seven minutes to take the Short Dark Triad test. Like most personality tests, this test comes with a few statements that you may agree or disagree with. Don’t worry about how you are scoring when you take the test – just stay honest.

Give the test to your friends and share answers. If any of your friends score over 60 on the results, consider this a warning sign. The score could indicate that your friends are manipulative, dishonest, or don’t have a high interest in your well-being. In other words, they might not make such a great friend and should be kept at a longer distance.

In short, the Dark Triad test is a very quick test to take and teaches you a lot about 3 main areas of your personality. The quiz is designed to measure these traits by having you answer questions that psychologists assume are correlated to the traits. For example, if someone answers “Agree” to “I do what I want and do not feel particularly obliged to anyone”, then they may be more Narcissistic due to their own self-preservation.

The trick about about these dark triad traits in your friends, is that you cannot change them. In fact, it is very difficult to change someone else’s personality. However, you do have the great ability to alter your own ability, and thus, lower your dark triad personality scores. This process if called “Self Improvement”, and if you’d like to learn more about personality psychology, you can take the test yourself or read more on the topic throughout this website.

An adversary to the dark triad personality quiz is the light triad. This is a simple test to measure ‘positive’ traits of your character. The Light Triad was developed by Scott Barry Kaufman.

You might be asking “If you score high on the dark triad, will you score low on the light triad?”. Well, a recent study found a correlation of -0.48, which means there’s a slight negative correlation, but it’s not enough to be scientifically significant.

This trait is the idea that you should treat people as humans for their own means, not as pawns or ‘players’ in your game. If you rank low in Kantianism, you most likely treat people as things to manipulate and only valuable if they’re useful to you.

This trait is essentially the belief that humans are good. There’s a small correlation between someone’s faith in humanity and their likelihood of experiencing symptoms of depression.

This is the belief that humans, no matter their background or differences, deserve respect and appreciation. MOST people will have a higher score of humanism, but you’d be surprised how much of the general population holds prejudice against certain human differences.

There seems to be a link between certain facial features and scoring differently on the dark triad scales. Take a look below to see the average faces of 33 men and 48 women in each category: 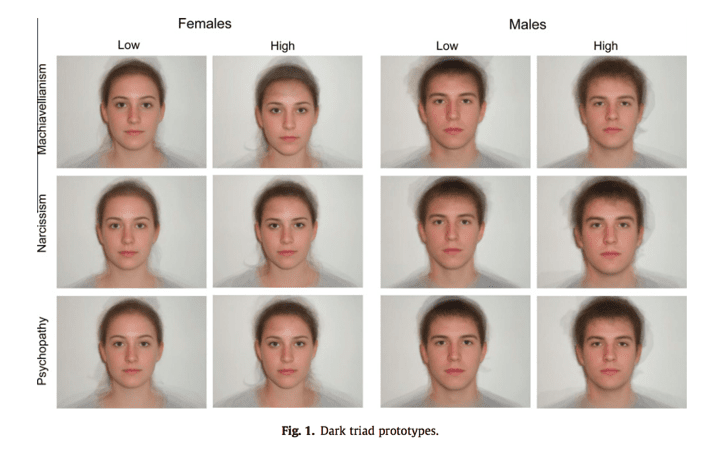 In a study from Victor Shiramizu and his colleagues, there seem to be a correlation between high scores and certain facial features. In fact, the study has been replicated a few times and each time participants can correctly identify high-narcissism male and female faces from a group of random faces more often than not.

Participants were also able to pick out female faces that scored high on the psychopathy scale.

They did note in the study that people are NOT good at discriminating those with high or low Machiavellian scores.

What does this mean? It means if you’re very narcissistic on the dark triad personality test, someone can probably tell just by the way you look.

There have been a few studies that show the connection between high scores in each category of the quiz with long-term and short-term relationships.

One study showed that people who score high in all 3 traits, desire short-term relationships more often than long-term. They also noted that they had a higher-than-average number of sexual partners. (Jonason, Li, Webster, & Schmidt, 2009)

Think about it… If you only care about yourself (narcissistic), are willing to do anything to have sex (Machiavellianism), and don’t feel bad afterward (psychopathy), then of course you’ll have more sexual partners.

People scoring high in all 3 are also able to “steal mates” and “be taken from mates”. This doesn’t mean cheating, but it’s the next worst thing. (Jonason, Li, & Buss, 2010)

Some psychologists believe a 4th dark trait should be added to the scale: sadism. Sadism is usually defined as ‘the enjoyment of cruelty’, which would definitely classify as dark. However, there isn’t much research on how this trait correlates with the other 3.