At the center of many theories in social psychology is the nature/nurture debate. Do we develop a certain personality and make certain choices because it’s in our nature? Or do our experiences alone shape who we become and how we look at the world? 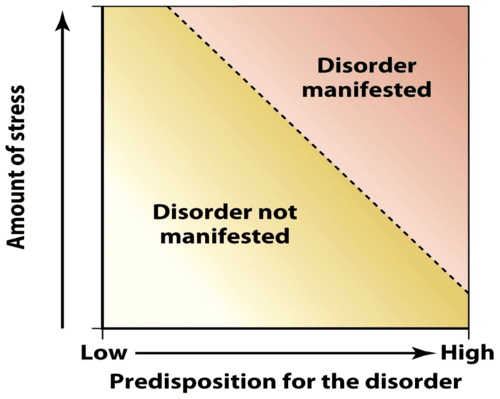 In this video, I want to look at one particular model that brings both factors into play. It’s called the Diathesis Stress Model (also known as the Stress-Vulnerability Model.) This takes genetics and personal experiences into account when assessing a person’s likelihood for developing mental disorders.

History of the Diathesis Stress Model

Mental disorders are not always easy to identify. It’s not easy to pinpoint a moment where a person “became depressed.” And the causes attributed to mental illnesses have caused some pretty dramatic treatments over time.

In Ancient Rome, for example, Hippocrates connected depression to an excess of “black bile” in the kidney or spleen. A physician named Asclepiades argued against these terms, saying that depression was caused by emotions of grief or hurt. Asclepiades was pretty close, but pretty soon, his theories were thrown out. For centuries after the Ancient Romans, mental disorders were linked to interaction with the devil. Some patients with mental disorders were burned at the stake.

Fast-forward to 1977. At this point, psychologists and doctors believed that more natural factors played into the development of mental disorders. Could it be genes? Could it be emotions? Could it be trauma from childhood, like Freud theorized?

What if it was a combination? This was the idea proposed by Joseph Zubin, a Lithuanian-American psychologist who specialized in the study of schizophrenia. He believed that relapses could be predicted using a model. On one axis was diathesis, or vulnerability. On the other axis was stress. The right combination of low vulnerability and low stress could keep a person from relapsing or showing symptoms.

Zubin’s model, the Diathesis-Stress model, has since been adapted and applied to a range of mental disorders and conditions, including addiction. Let’s go over what these factors mean and how it can help anyone to keep themselves in check.

The first part of this model is diathesis. In regards to the diathesis-stress model, “diathesis” is often used interchangeably with “vulnerability.” If someone is more vulnerable to a mental disorder, it might not take a lot of stress for symptoms to start appearing.

Think of this like a cup. In this analogy, diathesis is marbles in the cup. Stress is water. A cup that is ¼ full of marbles will need quite a bit of water before it starts to spill over. If the cup is ¾ full of marbles, it won’t take that much water. This is how diathesis and stress works.

So what causes diathesis? A few factors may come into play here:

Not all of these things are “nature” in the way that they are genetic. But these factors tend to stay very present in a person’s life. If a person were able to move out of a low-income household into a more affluent situation, they may be less vulnerable to certain conditions. In general, it takes a lot to move these “marbles” out of a person’s cup. It might be impossible.

Now let’s talk about stress, or the “water” in the analogy I used earlier. When stress is piled onto a person’s life, they are more likely to be “triggered” and display symptoms of a mental disorder. Stressors may be things that are generally considered stressful:

Chronic illnesses or ongoing stressors may not be a one-time event, but may continue to “fill your cup.” Stressors don’t have to be traumatic or life-altering, either. The stress of graduating high school, studying for exams, or buying a home may also “fill your cup.”

It’s important to note that diathesis can cause stress or vice versa. Growing up with the knowledge that a parent has bipolar disorder can be very stressful. That early stress may remain in the body and make a person generally more vulnerable. Without addressing the issue or seeking treatment, this process can continue to cause more and more stress and vulnerability.

But what about someone who is predisposed to a specific mental disorder, has a lot of stress, but still manages to go about life without showing any major symptoms?

These people are probably shielded from certain “protective factors.”

In the past 20 years, the diathesis-stress model has been adapted to include these protective factors. You may hear this version of the model referred to as the “stress-vulnerability-protective factors model.” Stressors and diathesis are still present in this model.

Protective factors make stressors easier to handle. These factors may include:

An addict, for example, may be predisposed to an addiction and face stress in their marriage and career. With the help of an AA or NA group, they may be able to face those stressors and overcome them without relapsing.

What Does This Mean?

The Diathesis-Stress Model can be used to assess anyone’s risk. But if you take away one thing from this video, it’s that stress is dangerous. Stress can be hard to avoid, like during a global pandemic or during a tragedy that is out of your control. But if you notice that more stress is coming into your life, it’s especially important to assess what protective factors are present. Do you have positive relationships that can help you through a stressful time? Is your diet and daily routine contributing to stress, or protecting you from it? The more protective factors in your life, the more confident you can be in your health and minimized risks.