If you’re here, you may have a research project or some homework that has to do with the term Social Loafing. Have no worries, after reading this article, you’ll have a complete understanding of what social loafing is, how it works, and specific measures you can take to prevent it.

What is Social Loafing?

Social loafing occurs when an individual is doing less when working in a group, as opposed to putting forth full effort if they were alone. Maximillian Ringelmann discovered it in 1913 when he noticed group pulling-power in a tug-of-war was less than the sum of individual strengths.

In fact, the average contribution decreased each time he added members to the team.

This phenomenon suggests members put in less effort as group size grows. This thought makes a mockery of the idea that putting people into teams encourages them to work harder. This could cause an entire human resource team to have palpitations. This is however only half the truth as we explain below.

Tug of war, group homework projects, and an entertainer asking an audience to scream are all examples of social loafing because as you add more people to a group, the total group effort declines.

Tug of War is the perfect example because it's where Maximillian Ringelmann originally found it. He realized that as you add more people to a Tug of War game, the amount of pressure did not scale up perfectly. In fact, the more you add, the less each individual worked. Here's an image to show the overall effort as he added more pullers: 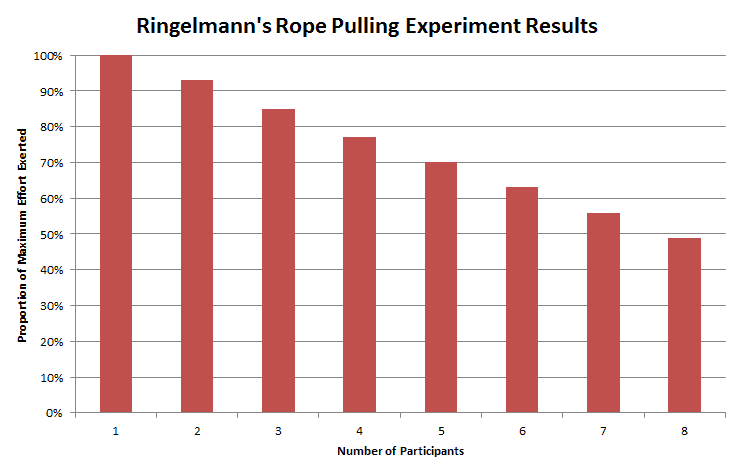 Group homework projects are another great example. We've all seen the meme where one student does all the work and the others get the grade. Those who don't work on the project are considered social loafers.

Have you ever been at a concert or an event where the main speaker asks the audience to say something or maybe clap? This is a perfect place for social loafing to happen. Sometimes the speaker may even say "That wasn't loud enough". Interestingly, the same thing happens as tug of war; as you add more people to a group, they are less likely to participate in what the speaker is asking them to do.

Examples of Social Loafing in the Workplace

Have you ever been in a brainstorming meeting with your team and someone lets everyone else come up with solutions? Or worse, they only chime in to shoot down another person’s idea. That’s social loafing. Another example of social loafing in the workplace is simply logging off when members of your team step up to complete the daily tasks shared in a meeting or on Slack. When you’re in a Zoom conference room of 100, it’s easier to feel like you can turn your camera off, grab a snack, or zone out.

Examples of Social Loafing in Sports

But you don’t have to be in a suit and tie or tackle an academic project to see someone “loafing.” When you’re on a team with multiple star players, it may be easy to think that one of them will do the brunt of the work. Someone may not speak up and ask their coach or captain to be involved in big plays or lead the team because they are not in charge or all eyes are on other players.

Team members begin loafing socially when they feel they are not going to achieve much, and therefore conclude that their participation is optional. Here are two main reasons that contribute to social loafing.

The best sports team coaches achieve incredible results when they hold the team together and motivate individual players and as well as the collective. They also know their team needs space to ‘let off steam’ too.

Reduced belief in the value of contributions – If a team member feels their impact will not be worth much - especially in a large team - they may decide to back off and enjoy the ride at the expense of the others.

This is one of the main reasons many of us don’t volunteer for projects, or take up leadership positions. It’s probably also why half the American population stays away from the polls during presidential elections.

In many cases, the individual that is "loafing" may not even realize it.

Also common is the division of "in-group" and "out-group" members. This is common during homework projects when a small amount of students work together and complete a large majority of the work.

How to Manage Social Loafing Through Motivation

There are three ways that we can get our group moving in the right direction. These strategies are collaboration, content, and choice. This plan is a healthy alternative to encouraging competition, because it reinforces the collective dynamic. It is important to remember that this works best during collective practices:

The Difference between Individual and Group Decisions

Individual decisions can be best when we need a quick answer within a defined situation, for example "should I post a link to this on Facebook or Twitter?".

Decisions like allowing social media access during work hours are better taken in a group. This is because they are more wide-ranging and open-ended.

Individual decisions are quick and cheap. They are therefore best suited to situations where something must be done right away.

However, group decisions take time to reach, and are therefore costly. Some of this inefficiency comes down to social loafing.

Wrap Up and Something for Everyone to Take Away

Social loafing makes a positive contribution to the soft, non-task-related aspects of group functioning. Collaboration, content, and choice provide a great framework for group leaders to manage it.

However, groups should also self-optimize from the bottom up, not be driven from the top. It follows individual members also have important contributions to make towards managing social loafing. If that sounds like you don’t wait, collaborate by choice and make a difference at meetings.