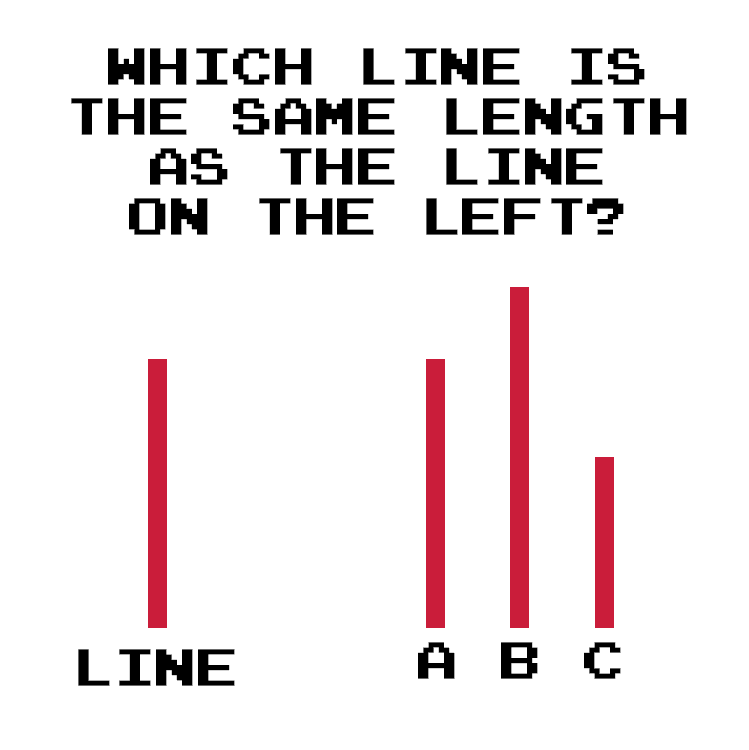 Solomon Asch used 123 male college students as his subjects, and told them that his experiment was simply a ‘vision test’. For his control group, Asch just had his subjects go through his 18 questions on their own.

However, for his experimental group, he had his subjects answer each of the same 18 questions in a group of around a dozen people, where the first 11 people intentionally said obviously incorrect answers one after another, with the final respondee being the actual subject of the experiment.

Solomon E. Asch was a pioneer in social psychology. He was born in Poland in 1907 and moved to the United States in 1920. Asch received his Ph.D. from Columbia University in 1932 and went on to perform some famous psychological experiments about conformity in the 1950s.

One of these studies is known as the “Asch Line Experiment”, where he found evidence supporting the idea that humans will conform to and accept the ideas of others around them, even if those ideas are obviously false. This study is one of the most influential studies in social psychology. 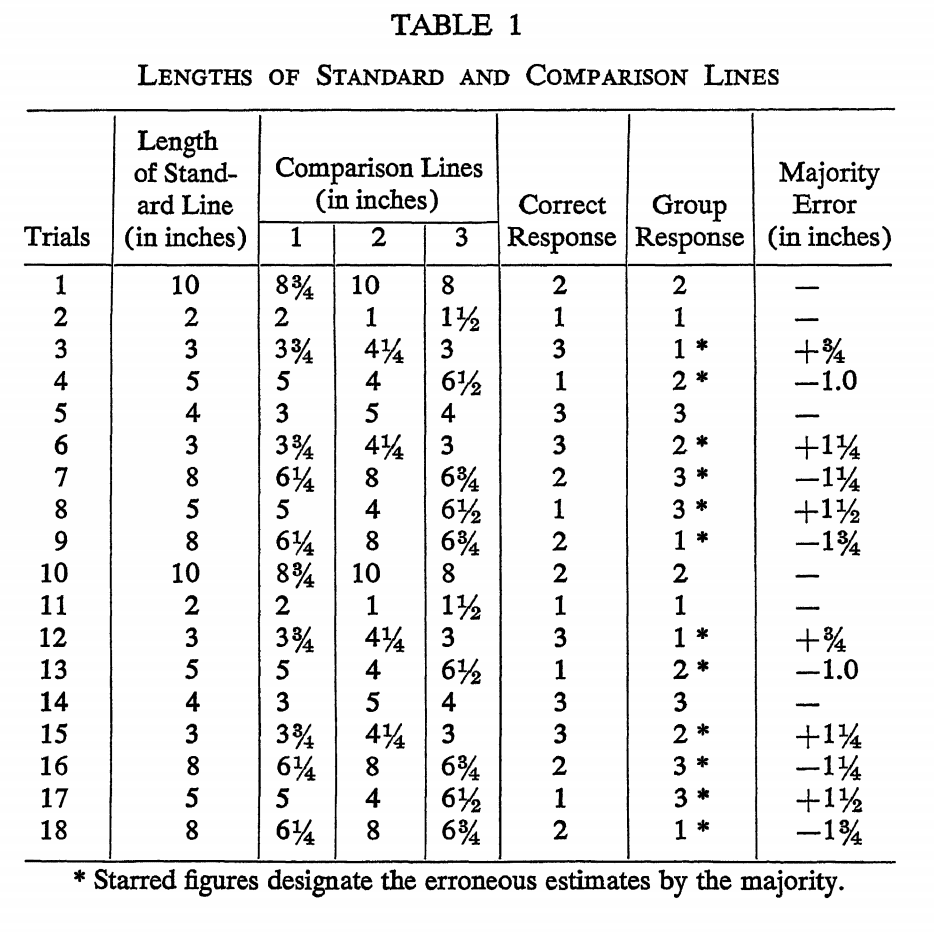 ​Asch found that his subjects indeed were more likely to give a false response after the other members of their group (the actors) gave false responses. As shown in this ‘Table 1’ from his experiment, during 18 trials, the ‘Majority Error’ column shows no error when the group response was the correct response, such as in Trial #1.

However, when the entire group intentionally gave a false answer (these situations are designated with an * under the “Group Response” column), the ‘Majority Error’ did exist and was slanted toward the opinion of the group.

As for his control group, Asch found that people generally said the correct answer when they did not have a group of actors saying answers before them.

​After the experiment, Asch revealed the true experiment to his subjects and interviewed them. Some subjects had become very agitated during the experiment, wondering why they kept disagreeing with the group. When the group pressed one particular subject on why he thought that he was correct and the entire group was wrong, he replied defiantly, exclaiming: “You're probably right, but you may be wrong!”

Other subjects admitted during the interview that they changed their answers after hearing others in their group reply differently. One was recorded saying, “If I’d been the first I probably would have responded differently.” Another subject admitted, “...at times I had the feeling: 'to heck with it, I'll go along with the rest.' "

​Asch found that his subjects often changed their answers when they heard the rest of the group unanimously giving a different response.

After the interviews, Asch concluded in his study that his subjects conformed to the opinions of the group for three different reasons:

Distortion of judgment: This was the most common outcome, where subjects assumed that their individual answers were incorrect after seeing the rest of the group answer differently, so they changed their answer to align with the group.

Distortion of action: These subjects never doubted that they were correct and the group was wrong, but out of fear of being perceived as different, they suppressed their opinions and intentionally lied when it was their turn to give an answer.

​Asch went on to replicate his experiment with new factors, including:

Why Is The Asch Line Study Ethnocentric?

​One big issue with the Asch line study is that the subjects were all white male college students between the ages of 17 and 25, with a mean age of 20. Since the experiment only shows results for this small and specific group of people, it alone cannot be applied to other groups such as women or older men.

Other Problems with the Asch Line Study

Another problem to think about is that young white men in the early 1950s may have responded differently to this experiment than young white men would today. In the United States, which is where this experiment was performed, the mid-1950s was a historic turning point in terms of rejecting conformity, with youth pushing towards a more free-thinking society. This experiment was performed right around the time that movement was just starting to blossom, so the subjects had not grown up in the middle of this new anti-conformist movement. Had Asch performed this experiment a decade later with youth who more highly valued free-thinking, he may have come across very different results.

Another thing to note is that, at least in the United States, education has evolved with this movement of encouraging free-thinking. Teachers today tell students to question everything, and many schools reject ideas of conformity. This could once again mean that, if done again today, Asch would have found very different results with this experiment.

Another problem with this experiment is that, since subjects were not told it was a psychological experiment until after it was over, subjects may have gone through emotional and psychological pain during what they thought was just a simple ‘vision test’.

Finally, it’s good to remember that the ‘Asch Line Experiment’ is just that: an experiment where people looked at lines. This can be hard to apply to other situations, because humans in group settings are rarely faced with questions that have one such obvious and clear answer, as was the case in this experiment.