Leon Festinger was a renowned American psychologist, researcher, and author. He is best known for developing cognitive dissonance theory and social comparison theory. In addition to challenging the dominance of behaviorism, Festinger spearheaded the use of scientific experimentation in social psychology. In 2002, the Review of General Psychology ranked Festinger as the 5th most eminent psychologist of the 20th century. 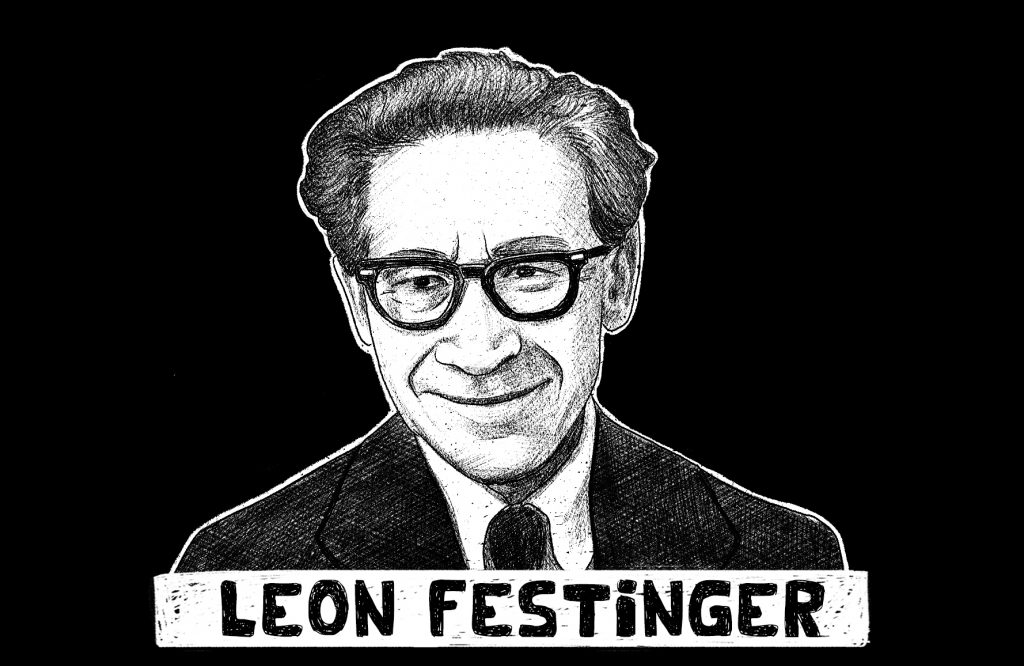 Leon Festinger was born on May 8, 1919 in Brooklyn, New York. His father and mother were Jewish-Russian immigrants named Alex Festinger and Sara Solomon Festinger. Festinger’s parents departed Russia for the United States just before the outbreak of World War I in 1914.

When Alex Festinger left Russia, he was known to be an atheist and a radical. He would maintain these ideals for the rest of his life. Alex Festinger worked as an embroidery manufacturer. He and his wife Sara were self-educated.

From an early age, Leon Festinger showed a deep love for science. He attended Boys’ High School in Brooklyn and was a very good student. Although he was extremely intelligent, some of Festinger’s childhood friends described him as “an aggressive, sometimes scathing critic.” During his teenage years, he read psychologist Clark Hull’s book entitled Hypnosis and Suggestibility and discovered a scientific field that “still had questions to be answered.”

After leaving Boys’ High School, Festinger enrolled at the City College of New York. He earned his bachelor’s degree in psychology in 1939 under the guidance of Max Hertzman. Festinger then pursued graduate studies under Kurt Lewin at the University of Iowa. Festinger was interested in Lewin’s efforts to establish psychology as a field with “dynamic processes involving perception, motivation, and cognition.” However, when Festinger arrived at the university, Lewin’s interests had shifted to “group dynamics” or social psychology.

At that time, Festinger was not interested in social psychology at all. He believed the field lacked scientific rigor, hard data, and clarity. As a result, he did not take a single social psychology course and chose instead to focus on Lewin’s earlier work. Festinger earned his master’s degree in child behavior in 1940 and his PhD in child behavior in 1942.

Festinger continued his research at the University of Iowa until 1943. He then moved to the University of Rochester to work as a senior statistician for the National Research Council’s Committee on the Selection and Training of Aircraft Pilots during World War II. In 1945, Festinger moved to the Massachusetts Institute of Technology (MIT) to join Kurt Lewin’s Research Center for Group Dynamics as an assistant professor. It was during his time at MIT that Festinger eventually began to investigate and embrace social psychology.

Festinger’s initial interest in social psychology was sparked by accident. He was asked to conduct a study on how satisfied MIT students were with their on-campus housing. Festinger discovered that students who had close social relationships had similar views on housing, while students who had differing attitudes on housing tended to be social isolates. These findings led Festinger and his assistants to develop experimental approaches that many people consider to be “the birth of systematic experimental social psychology.”

What is Cognitive Dissonance?

Cognitive dissonance is the psychological tension people experience when they become

aware of discrepancies between two of their cognitions (e.g., thoughts, beliefs, attitudes, plans, and knowledge about their behavior). According to Festinger, humans have a strong desire for consistency among cognitive elements. When they become aware of inconsistencies, it triggers an unpleasant psychological state of arousal, which then motivates them to reduce the inconsistency. Cognitive elements that conflict with each other are said to be dissonant, while those that are consistent with each other are termed consonant.

All of us have experienced cognitive dissonance at some point in our lives.

We may think fast food is bad for our health, but can’t resist stopping at McDonalds on our way home from work. We may consider ourselves to be honest, but try to cheat on an online exam. In such situations, the conflict between what we think and what we do results in mental discomfort.

How was the Theory Developed?

The theory of cognitive dissonance was first published in 1957. Festinger developed the theory after studying events surrounding a deadly earthquake that occurred in India nearly two decades before. People living in nearby areas, who felt the shock but experienced no ill-effects, began spreading rumors that even worse disasters would come upon their villages.

At first, Festinger was puzzled as to why people would create and believe such rumors when there was hardly any evidence to support them. He later concluded that the rumors helped to justify the intense fear residents of these neighboring villages felt after the earthquake. According to Festinger, the villagers naturally became anxious and terrified after learning of the extreme devastation in neighboring areas. But given that they had sustained no damage, they also recognized that they had much less to be anxious about. Festinger believed this inconsistency between what the villagers felt and what they knew resulted in psychological tension. In order to reduce it, the villagers altered one of their beliefs, convincing themselves that they did in fact have something to fear—a more severe disaster was supposedly on the horizon.

Festinger had the opportunity to explore the concept of dissonance further when he and two colleagues infiltrated a small doomsday cult known as The Seekers. The leader of the group claimed to be receiving messages from extraterrestrials called the Guardians. On the basis of these “messages,” she predicted that a global flood would destroy the world on December 21, 1954. However, cult members would be saved by flying saucers that would take them to another planet. Many believers quit their jobs and disposed of their money, homes, and possessions in preparation for that event.

The predicted doomsday came and went—no flood, no flying saucers. The group, understandably, became anxious and distraught. Suddenly, the leader claimed to have received another message from the Guardians stating that the world had been saved because of the “force of good and light” that had been spread by the group. As Festinger explained, the group attempted to decrease the dissonance they felt as a result of the failed prediction by adding this new belief to explain away the inconsistency.

The cult members (who had previously avoided publicity) immediately began a vigorous campaign to attract new recruits and media attention by describing how they had saved the world. Festinger reasoned that these efforts were designed to further reduce dissonance. If members could convince more people of what they believed, the extra affirmation would help to dispel any remaining feelings of unease over what had transpired.

What Determines the Level of Cognitive Dissonance?

According to Festinger, two main factors influence the level of dissonance we experience in a given situation:

How Can Cognitive Dissonance be Reduced?

Festinger specified three primary ways in which dissonance may be reduced:

In 1954, Festinger proposed that humans have a natural drive to evaluate their opinions and abilities. When no objective means of evaluation are available, people satisfy this drive by comparing themselves to others. According to Festinger, people are most likely to engage in comparisons with individuals who are similar to them on relevant dimensions.

Social comparisons may result in a change in one’s opinion or ability. This change is usually in the direction of greater uniformity. Achieving similarity with others (i.e., fitting in) makes us more confident about our own opinions and abilities.  The extent to which a person changes, however, depends on several factors, namely the importance and relevance of the comparison group, and how attracted the individual is to that group.

In composing his theory, Festinger noted a major distinction between comparisons of abilities and opinions. He suggested that in the case of abilities, humans possess a “unidirectional drive upward” which does not apply to opinions. This upward drive is a motivation to keep performing better and better, and it leads to ability comparisons with similar individuals who are slightly more capable than we are. When we notice that another individual is better than we are in a particular area of ability, we attempt to improve our performance level.

The upward drive promotes competition and may interfere with the emergence of social uniformity. However, Festinger acknowledged that this drive might apply only to Western cultures which promote individual achievement and competition.

Back in 1950, Festinger, Stanley Schachter, and Kurt Back undertook a study to determine how friendships were formed among residents of a students’ housing complex at the Massachusetts Institute of Technology (MIT). The researchers found that the formation of friendships was closely linked to physical proximity. This became known as the principle of propinquity - a fancy way of saying that the closer we are to someone physically, the more likely we are to be attracted to them.

to form friendships with those living upstairs.

The theory of cognitive dissonance has been used to increase health-promoting and other desirable behaviors. Usually, a state of dissonance is induced by having individuals engage in an activity that conflicts with some undesirable behavior or attitude on their part. For example, in one study, college students who often engage in risky sexual behaviors were asked to prepare and give a speech on the importance of safe sex. The inconsistency between what they typically do and what they were asked to promote triggered a state of dissonance which they were motivated to reduce. Many of them did so by increasing condom usage after the study.

The technique described here is called hypocrisy induction. When individuals become aware of a glaring inconsistency between their attitudes and actions—that is, their own hypocrisy—the resulting discomfort acts as a powerful motivator for behavior change. The same principle has been used to reduce littering, speeding and prejudiced responses, and to promote water conservation, recycling, and charitable donations.

Social comparison theory has also been applied in several ways, a few of which are mentioned below:

Cognitive dissonance theory remains one of the most popular theories in social psychology, but it is not without its critics. Some of the arguments that have been raised against it are:

Another criticism of Festinger’s social comparison theory is that it does not specify the range and boundaries of social comparison. Some scholars consider this important since they doubt that people compare all of their abilities and opinions to those of others. Critics have also debated whether social comparison is primarily about self-evaluation, as Festinger suggests, or is more a matter of self-validation.

Festinger wrote several books on his landmark research. His most popular works are listed below:

Some of Festinger’s other awards and accomplishments include:

Festinger closed his lab in 1979. Four years later, he expressed disappointment at what the field of psychology and he himself had accomplished. Festinger then became interested in archaeology as he wanted to see what else he could learn about human nature. His final academic pursuit was investigating why new technology tends to be adopted faster in the West than the East.

Festinger became ill with liver and lung cancer in 1988. After reading literature on cancer, speaking with medical experts, and evaluating the possible side effects of treatment, he decided not to obtain treatment for himself. Festinger passed away a few months later on February 11, 1989, before his final research findings could be published. He was survived by his wife Trudy, his three children, his stepdaughter Debra, and three grandchildren.

Fogg, B. J. (2003). Persuasive technology: Using computers to change what we think and do. San Francisco, CA: Morgan Kaufmann Publishers.