How to Get RID of a Bad Habit

What is a bad habit?A bad habit is a habit that damages you and does more harm than good to your life.

Another bad habit is drinking excessively. Having a drink now and then is okay, but excessive drinking leads to bad health and destroys your relationships and financial success. Your financial success is harmed whenever you drink because (1) drinking costs money and (2) you can’t be very productive while dead drunk or hungover.

Drinking and smoking just wipe out the four pillars – health, wealth, love, and happiness – like a wrecking ball. 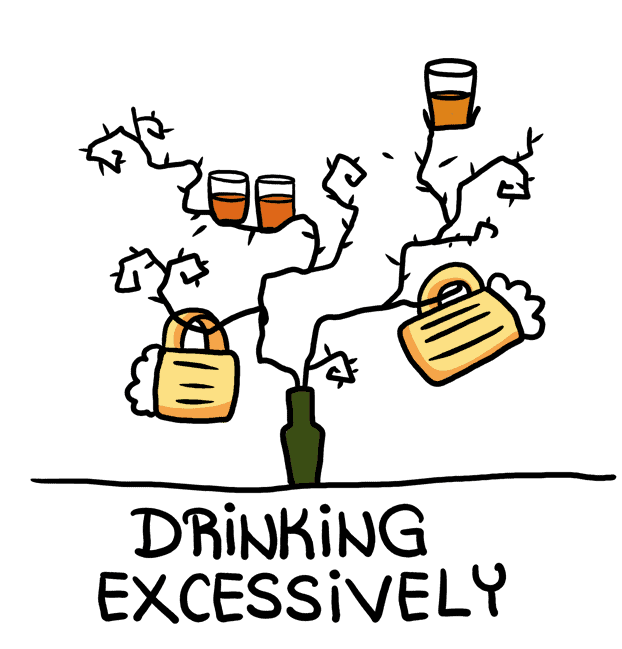 Other bad habits include eating fatty or greasy foods commonly, staying up too late, and wasting too much time checking your social media accounts instead of working on things that would make you feel really fulfilled.

Take a piece of paper and divide it up into three columns. In the center column, write down five to ten bad habits right now that you can identify in your life. This is the first step to intentionally getting rid of them.

Intention is important because you have to intentionally and mindfully want to get rid of them. 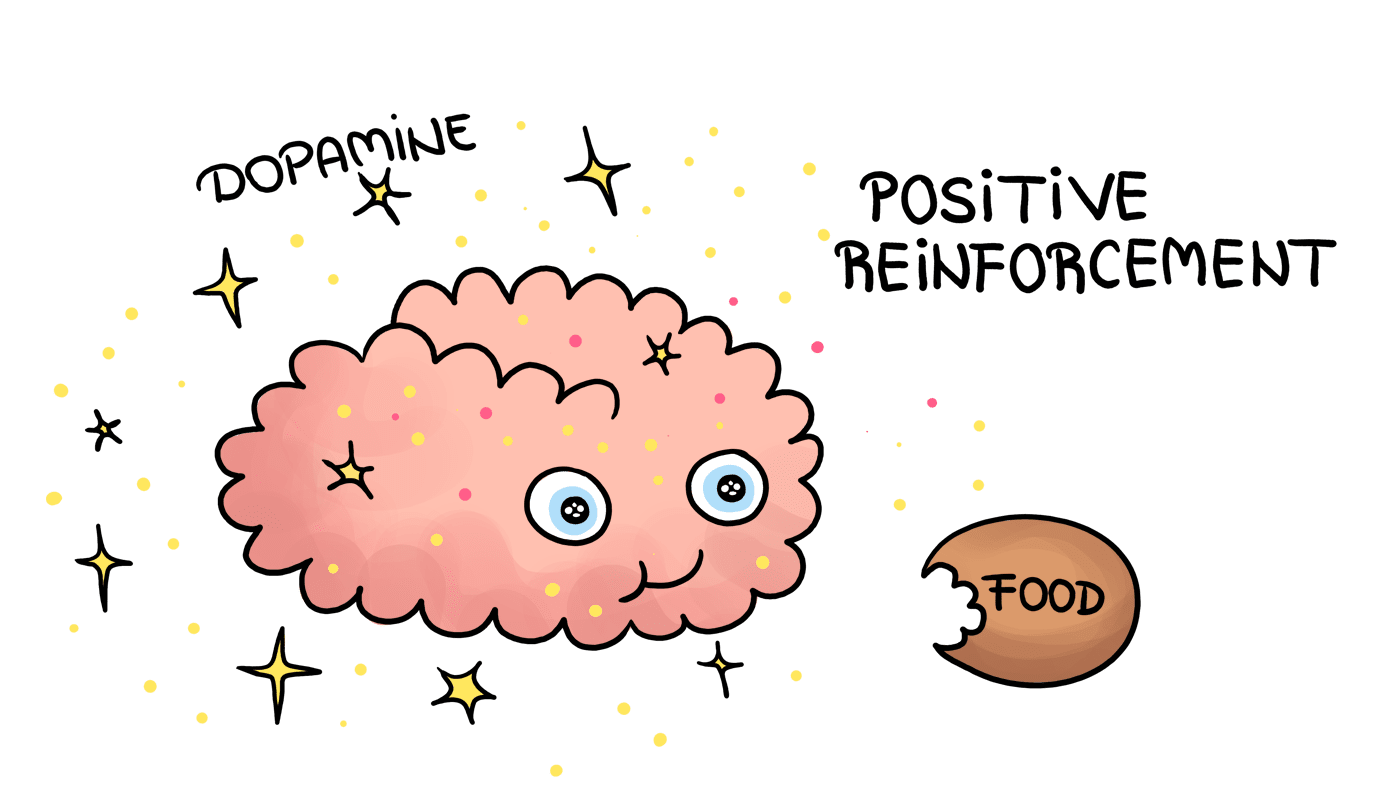 I’ll tell you a bit about positive reinforcement.

Basically, it’s our brain’s way of saying, “Hey, I’m hungry. What can we do?” You see food, you eat it, and you feel good about doing that because the brain is flooded with dopamine as a reward.

Dopamine is a neurotransmitter generated in the brain whenever we do something beneficial to our survival. That good feeling of reward really helps our motivation, because your brain says to you, “Hey, this is awesome, let’s do it more often.”

This reward system allows your brain to say, “Next time we’re hungry, how about we eat some food?” The reward happens every time you eat to satisfy your hunger, which gets compounded over many years of your life. Eventually, a very strong habit is formed. This is how positive reinforcement can create a habit – a reward every time you do something will put you in the habit to do that thing.

People start smoking for various reasons – they feel bad, they’re hanging around their friends that are peer pressured, etc. – so they do it, even though that the first experience of smoking is painful (you cough, wheeze, and your body just tells you it’s not good).

But why do they continue?

Because they are encouraged by peers; they start feeling “cool” and popular. They feel rebellious and unique, which all comes together to generate a dopamine rush in the brain.

Of course, nicotine plays its part in it as well, but it’s not nearly as addictive as feeling accepted and appreciated by your peers – even if you are doing something negative, even that is better than no attention at all.

This dopamine rush gives a positive reinforcement, which later turns smoking into a habit which is very difficult to quit many years later.

Here’s another food example of positive reinforcement: if you are feeling sad one day and you eat one box of ice cream, and it makes you feel good (sugar always helps)… the next thing you know, you start craving ice cream every time you feel sad. 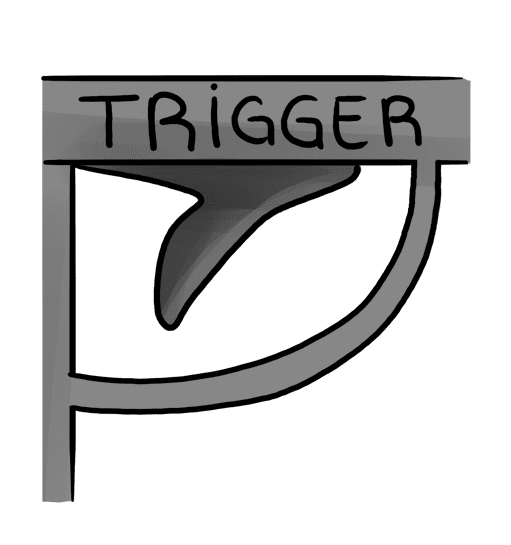 By now I assume you wrote down your 10 habits that you want to get rid of in the center column of your paper.

The next thing you need to do is write down what triggers that habit next it in the left column.

Understanding triggers is really important because it’s hard to get rid of a bad habit if you cannot find the trigger.

Every habit has a trigger, and the trigger was started back when the positive reinforcement began. The trigger could be hunger or hanging around a group of friends. The trigger could even be that you get home from work and see alcohol sitting in your fridge.

Finally, write down the rewards that you experience for that habit in the right column. Perhaps it’s a dopamine burst or the feeling of acceptance among your friends.

We can use positive reinforcement to get rid of a bad habit by destroying the trigger. If you get rid of that alcohol from your fridge, when you get home you’ll be less likely to drink alcohol.

Stop hanging around those friends that you always smoke around – or maybe go for a walk at that time of day when you like to smoke. Find the triggers in your life and try to get rid of them.

Removing the trigger will also destroy the rest of the positive reinforcement, which will crumble your habit.

You hang out with friends, you smoke, and then you feel better. If you get rid of the hanging around with friends part, that just completely demolishes the rest of your habit: the trigger, the behavior, and the reward all go away. 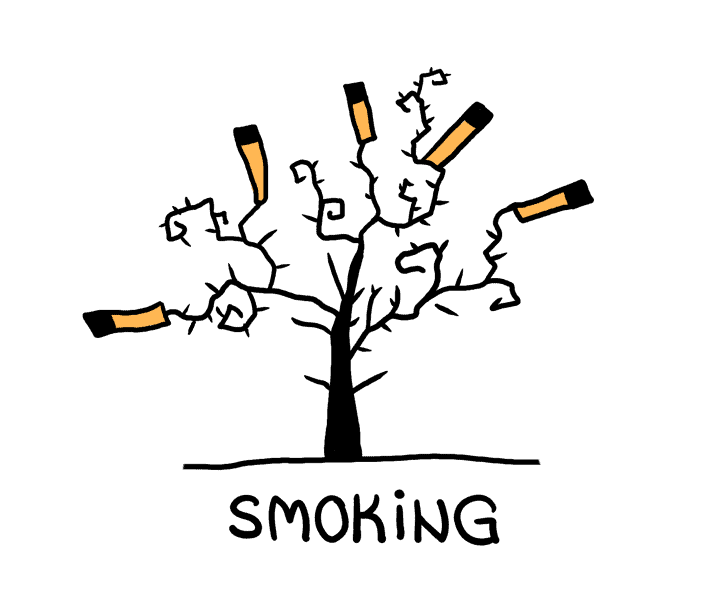 There was a study done on smokers where the researchers wanted to find and analyze what they could do to smokers to make them not smoke.

They achieved their goal by encouraging those smokers to practice mindfulness. Mindfulness is living in the moment and being conscious about what you’re doing. A lot of people, when smoking, are doing it mindlessly.

They’re not even thinking about smoking; it’s just a habit. Mindfulness helped the smokers break their habit because they started thinking about what smoking was doing to their body.

Self-improvement is really important because you need to have that metacognition to think about how you’re thinking to make yourself better and overcome a bad habit.

Mindfulness was the answer in the results of the study. With every breath they took in of the cigarette, they were thinking, “This is filling my lungs with all kinds of negative toxins, and I’m literally taking years off my life statistically.” This helped them to quit.

Mindfulness helps you understand things and ask yourself questions like, “What is this thing that I’m doing? What is this doing to my relationships?”

You have to understand your habits and reverse engineer them. Think, “Is this profiting me, or am I losing money? Am I lowering the value of my friendships? Am I losing years of my life?”

Try asking yourself these questions regarding the habits on your own list. You need to understand what the habit is doing to yourself, your health, your wealth, your love, and your happiness. 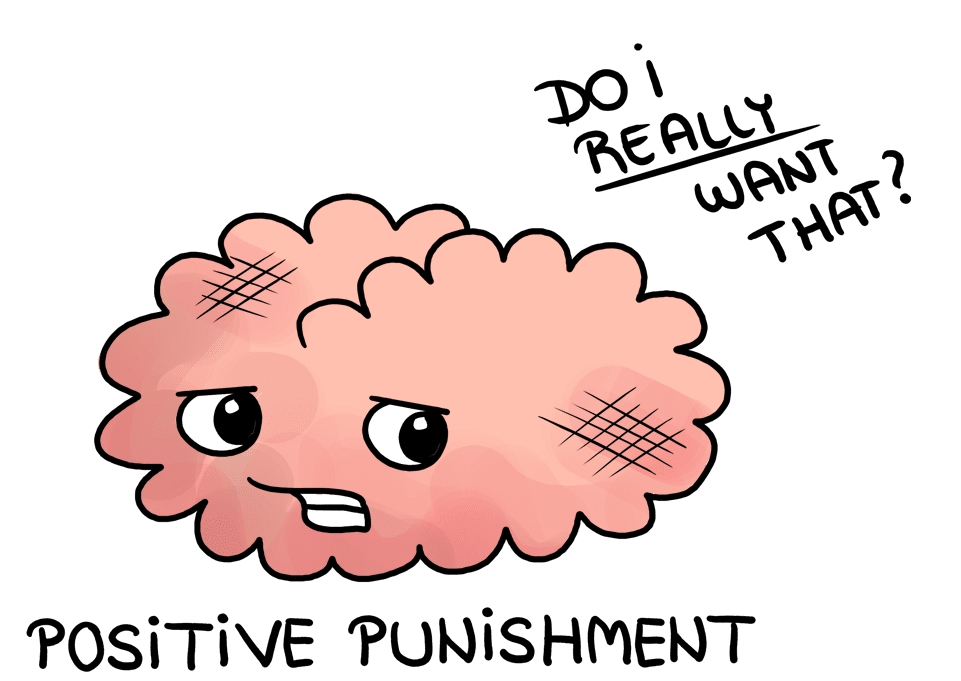 Positive punishment is a lot like positive reinforcement, only instead of a reward, you get a tax or some kind of bad consequence for your actions. For example, if you accidentally burned your hand every time you lit a cigarette, your brain will eventually rewrite itself to think, “Oh man, I gotta go back outside and burn myself again?”

I’m not suggesting in any way that you should do this to yourself, but I’m trying to help you use this as a concept.

You need some positive punishment: something to make you reconsider your actions and think, “Oh, instead of maybe just going outside and smoking, I’ll go outside and smoke with a person I do not like.”

Before you even started thinking about smoking, you’ll start thinking “Oh my, when lunch comes I gotta go out and talk to that person. They’re going to call me out on something I did wrong.”

Or you can just hide your pack of cigarettes in a hard-to-get place, and every time you feel the urge to smoke you go there and take just one cigarette. Then you have to put in extra effort each time until you lose the motivation bother doing it.

I have written a lot about smoking so far but this works for any bad habit you might have.

To be more general, positive punishment can be making a bad trigger for your unwanted action. This will prevent you and make you think twice before doing it.

Just be careful with the positive punishment though. If you do it long enough, or in the wrong way, it’s actually called, “learned helplessness.”

Learned helplessness is when someone does something long enough badly and they say, “I’ve done it, I’ve tried it for 10 years, and I can’t stop smoking.”

It’s actually a very strong psychological condition in which you feel like whatever you do, nothing’s going to happen – and of course it’s not… as long as you don’t really want to make a real change.

But don’t worry; there are millions of people with this condition – and I call it a “condition” because it’s a mindset that really needs to be solved. 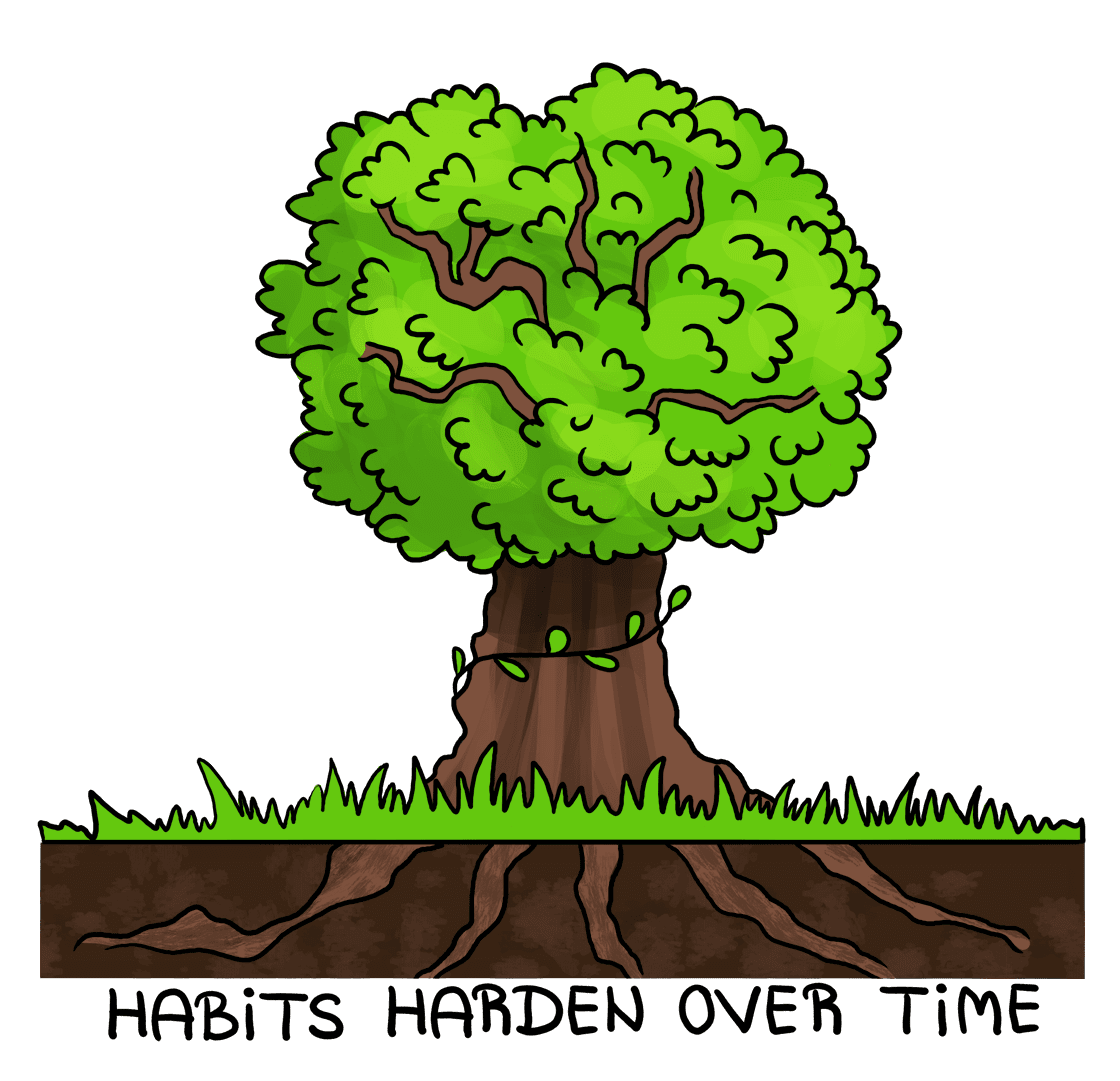 Now, there are certain situations in which whatever you do, you’re not going to have a big impact. But you need to understand there are ways to stop any negative habits that you might have.

There are ways of committing and not giving in to temptation for at least a week. That’s where positive punishment comes in – if you do it wrong, you’ll actually teach yourself that no matter what you do, it’s not going to change your situation.

But positive punishment does work if used correctly. 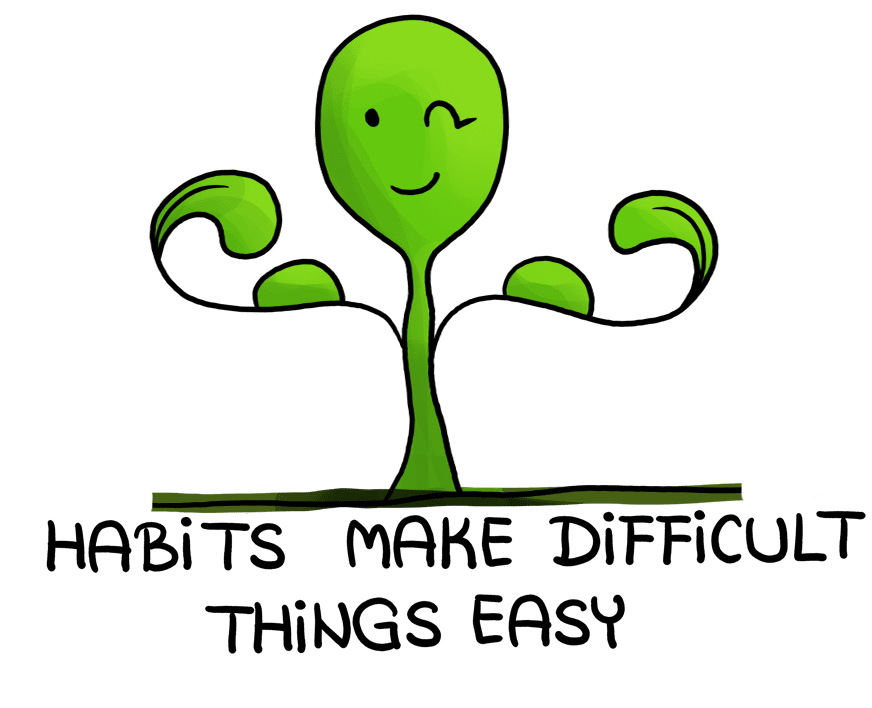 What is a Habit?

How to Get Rid of a Bad Habit

How to Replace a Habit