The HOTAPE Method; A Flirting Framework

Have you ever been walking around in public and you see some hotcha momma or a cutie patootie that catches your eye? You really want to go up and talk to her. Instantly your heart starts to race, but let’s imagine this time you actually find the courage to walk up to her. As you begin to talk to her, there’s a tight feeling in your stomach, maybe you have some of these thoughts running through your head:

“Is she creeped out by me?

“Was that too weird to say?”

If you never learn the correct method on how to flirt, you’ll continue to miss out on opportunity after opportunity to attract and connect with a potential high quality significant other. So use HOTAPE!

What Is the HOTAPE Method of Flirting?

HOTAPE is an acronym, where each letter stands for a principle that you can use in flirting. It’s a simple, proven framework! Using humor, openness, touch, attention, proximity, and eye contact, you can improve your flirting skills and enjoy conversations with anyone that catches your eye.

You need to learn how to flirt

Flirting isn’t just some skill that’s cheesy or reserved for the army of chads. Flirting is a skill that allows you to transfer your emotion of attraction and energy into another person. One day, you WILL meet a beautiful woman that would be thrilled to be with you, but if you haven’t had any practice flirting, you’ll be stumbling over your words and leaving her thinking that you’re either a selfish jerk or a lonely loser.

So in other words, don’t just flirt with THE ONE, flirt with everyone so that you can practice your skill, all you’re doing is transferring your emotion of energy to them. Then by the time you meet a girl you really like, you’ll be confident with your ability to flirt competently.

Jean Smith is the woman responsible for the HOTAPE method, and you might be wondering, why did she create it? Well, she’s a scientist and she wanted to know how people ACTUALLY understand when someone is flirting with them. In short, this woman wants to know the science of being flirted with. In short, she came up with these 6 things that almost all people do when they have the intention of flirting.

Consistent studies show that a good sense of humor is one of the most attractive traits to have as a man. Time over time, a woman would pick a less physically attractive man who is funny over a super attractive man who seems boring. Being funny is also easier than you think.

You don’t need to know any planned jokes or sarcastic wit. Women love the type of humor from a guy who just doesn’t take life so seriously. They inherently want someone to give them permission to let go and be free. I advise to try to see the humor in mundane situations and translate that over to your interactions with women. Put some energy into it, too. I have a friend who literally won a girl over by dancing at the gym after he hit a new PR. He was just having fun at life, but his lack of seriousness had a sexy senorita asking his name in no time.

Begin by listening to stand up comedians or seeing how other people apply humor in their life. Modeling success is a great framework for humor. Being funny ‘on the spot’ is actually quite closely correlated with being more intelligent. The ability to take a situation and turn it into something that invokes a laugh in someone else… that is actually a form of creative problem solving and that’s a trait that all women desire in a man.

It might make you smile like the grinch to realize that this is also a skill that can be trained and developed over time, I mean have you ever went back and watched some famous comedian’s first stand-up shows? They’re funny but for a different reason… Everyone starts somewhere, and you need to know that humor is just a skill that you’ll have to work on.

Did you know your body posture affects the level of testosterone in your body? Researcher Amy Cuddy showed in a Harvard University study that people who had a relaxed and open body posture, or something called a HIGH POWER POSE tended to have reduced levels of stress and increased testosterone.

When you convey a relaxed and confident body posture, it signals that you are a high value man. In evolutionary psychology terms, this means you not only have access to, but an abundance of resources, people, and ideas that could contribute, specifically to your future kids.

So what does this mean in real life?

I remember in college there was a cute girl I liked. She was outgoing, my perfect physical type and we had almost EVERYTHING in common. It was frustrating because each time our friend group hung out, she never gave me any attention or signs that she liked me. Then one day I learned from a friend how important touch was for a girl to build attraction.

When you know how to confidently touch a girl, it shows you have confidence and dominance. It also signals to the girls subconscious brain that you are a high-value man.

I went through the physical escalation ladder and decided to randomly pick the girl up and carry her to the dance floor in the club one night. As soon as I put her down, she had the biggest “I want you face” I have ever seen.

My confident action of physical escalation led me building more attraction from her.

Jean Smith, actually noted that during her study of the HOTAPE method, that touch was the number one predictor of someone getting out of the friendzone. She mentioned that touching hands and the upper back are great places to start.

Now, of course… you should never do something with a girl that you can’t read well.

This is why the ladder of physical escalation is so important. Always look directly in the girl’s face when engaging in physical contact. If she shows the slightest sign of disgust then simply smile, say my bad and continue with the conversation as if nothing happened.

This one is tricky to get right. How much attention do you give a girl? Do you NEED to pull away at times? What happens if you don’t?

Most men romanticize and give the girl “too much” attention through double texts, compliments and non-stop validation. We’ve all seen it go too far.

A great frame to adopt is to treat the girl you like as if she were a new guy friend.

You wouldn’t double text a new guy you met. You wouldn’t rush to hang out with them as soon as possible and you most definitely wouldn’t care too much what they thought about you.

Recognize that girls want to be treated like normal people and not some special princess like most men think. There are, however, a small group of women who really do wish and expect to be treated like a princess, however for most men, these girls are usually trouble. 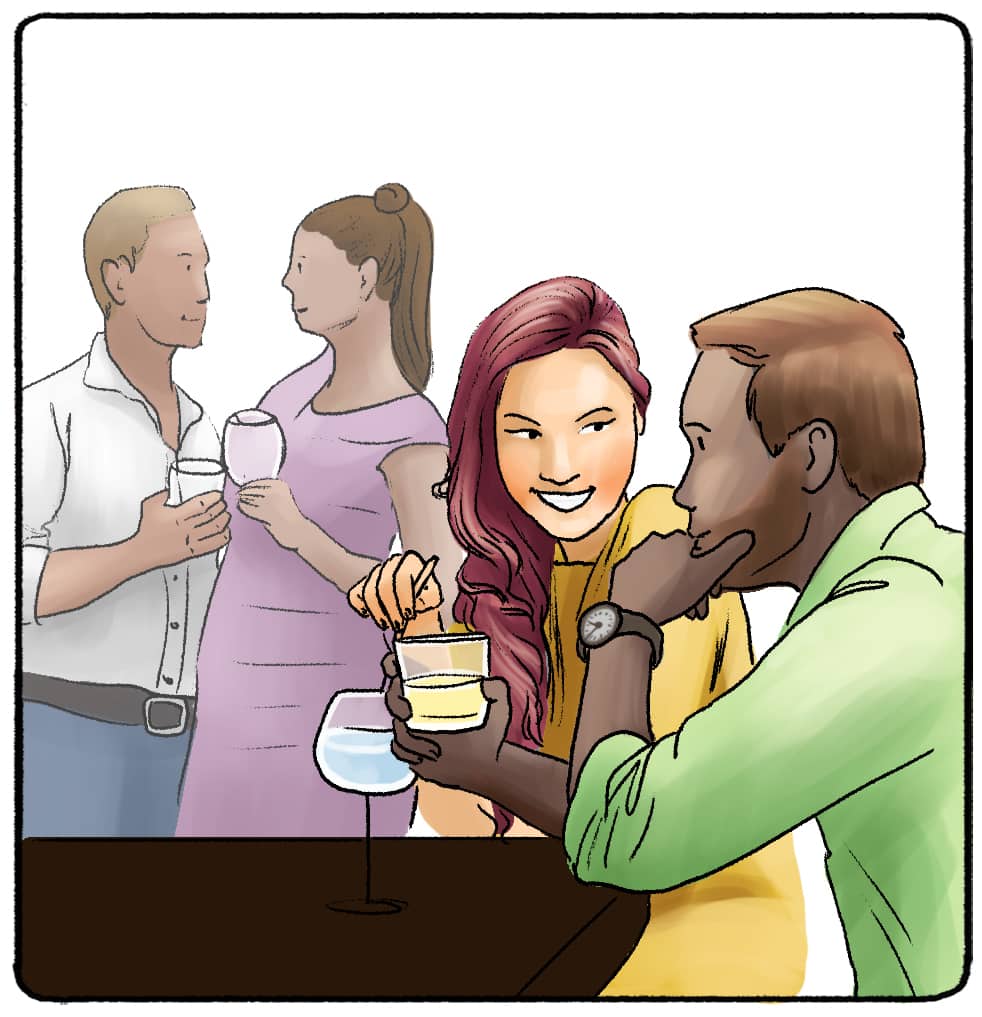 How close do you get to the girl in the conversation?

Does her distance show how into you she is?

Girls rarely ever go up and make the first move on a guy. However, one way they will is by standing close to the guy they like. Before the conversation even starts, recognize how comfortable she and you are with the space between.

If you stand too far away, the girl will think you are timid and shy. Don’t worry if you are too close to the girl. She will usually let you know by stepping back herself.

The perfect distance when first talking to her is usually an arm’s length. A way to gauge this is to think to yourself, “Can I reach out and touch the girl’s shoulder without extending too much?”

The number one creepy thing you can do toward a girl is stare too long. As a rule, if you and the girl connect eyes for more than three seconds or more than two times in 10 minutes, GO UP TO HER!

Otherwise if you wait, the awkwardness will begin to build up, in a bad way.

Do not say something cheesy like, “Hey I noticed you caught my eye.”

It seems like a planned line. Girls also never like to admit they came onto a guy. So just be casual.

Lastly, eye contact is the one part of this framework that differentiates the interaction from friendly to flirty. You can do all the others; humor, openness, touch, attention, proximity, but without eye contact, someone might just think you’re being friendly. Don’t believe me? You can definitely be funny with your friends, be open with them, even fist bump or pat their back, give them attention and be pretty close with them, but you look one of your friends in the eyes too long… it gets kinda awkward.

When you follow these six tips on the H.O.T.A.P.E. Theory your ability to meet and attract high-quality women will skyrocket. For many people who use it, the HOTAPE framework takes the pressure off of them as a person, and turns it into a game, where you must check off each part. Instead of you not being a funny person, you can just say you didn’t implement humor. Instead of not being attractive, you can just say you weren’t open enough in that interaction. In other words, you can blame the failure of an approach on your inability to follow the framework, instead of you as a person, which helps a lot of guys get over approach rejection easier.

Jean Smith, the creator of the HOTAPE framework, has a TED Talk where she explains this method in more depth. Learn from the source here!

Again, this is just one framework for flirting, as there are others. Another, more infamous method is the Push Pull method, which I actually happen to have an entire video on.

Why do people cheat?

How to Be Funnier

Deal with a Breakup

Flirty Questions to Ask a Girl

How to Set up a Date on Tinder

Basics of Asking a Girl Out

382 Never Have I Ever Questions

268 Would You Rather Questions

268 Would You Rather Questions

Questions to Ask a Guy

Questions to Ask a Girl