If you’ve stumbled upon this page, you may be looking for some examples of mood-congruent memory for a homework project. No worries, in less than 15 minutes, I’ll explain what it is and you’ll have a better understanding than what your psychology professor gave you.

Have you ever been somewhere, really enjoying life and having a ton of fun? Then out of nowhere, you get hit with a memory of when you were a child throwing a football back and forth with your dad on a beautiful sunny day? The reason you “randomly” remembered it may be explained with this psychological concept.

What is Mood Congruent Memory?

Mood-congruent memory is a psychological concept that broadly describes the phenomenon of your mind recalling and/or focusing on memories that are linked to your present mood or emotional state. For example, if you’re in a happy mood, you’re more likely to think about happy memories. If you’re feeling sad, you’re going to be focusing more on bad stuff that’s happened to you.

Mood-congruent memory theorizes that you are more easily able to retrieve a memory if your current mood is the same as the one attached to that memory.

How does this happen? Well, first let’s take a look at how we make memories! 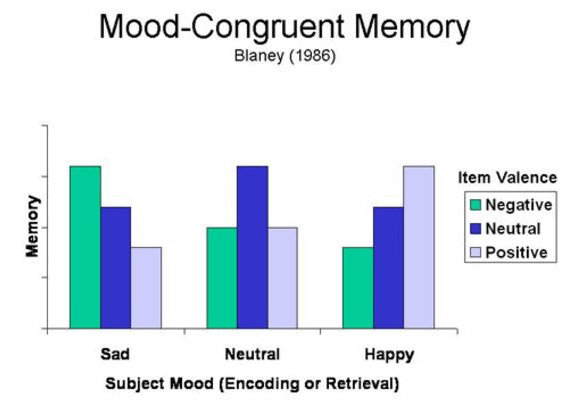 How memories are made

First, we have to decide if we want to remember what just happened or not. Initially, it gets dumped in our short-term memory. Information only gets kept in short-term memory for a while before it gets wiped and trashed. Our brain does this because it’s super organised, and well, we can’t – and don’t need to – remember everything.

However, if our wonderful brain decides that that memory is actually pretty important, it might get moved to our long-term memory. Once in our long-term memory, it can be retrieved as often as we like. Although, nothing lasts forever. And a long-term memory can still be wiped and trashed to make room for more relevant memories if we don’t access it for a long time. It’s actually why if you study for an exam, you’ll maybe remember bits of it for weeks and months later – but a year later? All that information might just be gone.

We still aren’t 100% sure how memories are made, but we know one thing for sure: mood is tied to memories.

Emotions are really important to how we encode or make a memory. Research shows that we are more likely to remember something if there’s a strong emotion attached to it. It doesn’t have to be negative, but we are programmed to pay more attention to negative stimuli (you can thank your survival instinct for that). This is because you were more likely to live if you payed attention to a lion (negative) than a blueberry (positive).

When you think about it, human beings are actually incredibly emotional creatures.

Think about how you feel when you see someone with a huge, silly grin on their face? If you’re in a good place, you’re likely to also start smiling – we can’t help it. We respond to emotional cues. It’s why when you watch a sad film, if you’re like me, you might start frowning or even crying at the really bad parts!

In the same way, our brain knows to encode an important memory with an emotion so we can retrieve it more easily later on. The stronger the emotion, the stronger the memory. It’s why some memories can literally feel as real and raw as if they happened yesterday.

In fact, studies show that people who are depressed are more likely to have mood-congruent memories than healthy, non-depressed people. This might be because depressed people tend to focus on any negative things in their lives. Bad memories just seem to keep surfacing on repeat. The problem with this is that it creates a vicious cycle of feel really low, constantly remembering all the horrible things that have happened in your life, and feeling even worse.

The short answer is: probably, but not to the extent that depressed people do.

Studies looking at mood-congruent memory in non-depressed individuals have had mixed results. A 2018 study predicted that it wouldn’t be able to demonstrate an interaction between mood and the affective content of words (for example, “flower” would be a happy word, whereas “funeral” would be a sad word) in their test sample. They were right. These ordinary folks, with their normal moods, just weren’t swayed one way or another.

There is a possible explanation for this. Psychologist, Alice Isen, suggested that some people might actually try to control a bad mood by deliberately focusing on positive thoughts and positive events in their lives. Think of it as a kind of emotional regulation. Because of this, maybe depressed people just aren’t as good at regulating their mood, which makes them more vulnerable to having mood-congruent memories.

A mood-congruent memory bias is where you’re better than normal at remembering events that are congruent (or in line) with your current mood.

For example, if you’re sitting on a beach enjoying life in general, if you have mood-congruent memory bias, you’d start tripping over a ton of equally awesome memories that make you feel good. Sounds great, right? It can be.

But if we remember that mood-congruent memory is more likely to be experienced by depressed people, it can also be pretty bad. Think of it like a landslide. It all starts with just a small pebble rolling down a hill. Just one bad memory. Suddenly, that single pebble is joined by another one, and another, and then a boulder, and then bigger boulders, until a whole mountain of bad memories comes slamming down on you. Not fun.

What does this all mean?

Everyone can have a mood-congruent memory, but people with depression are far more likely to do so. It happens whenever we’re happy and remember some happy time in our past, or whenever we’re sad and we start remembering all the sad things that have happened to us.