Have you ever taken a course and already the next day felt like you forgot most of what you’ve learned? That’s not surprising. Unless we consciously do something to retain newly acquired information, we’ll forget it in a matter of days.

This tendency is described by the Ebbinghaus forgetting curve. 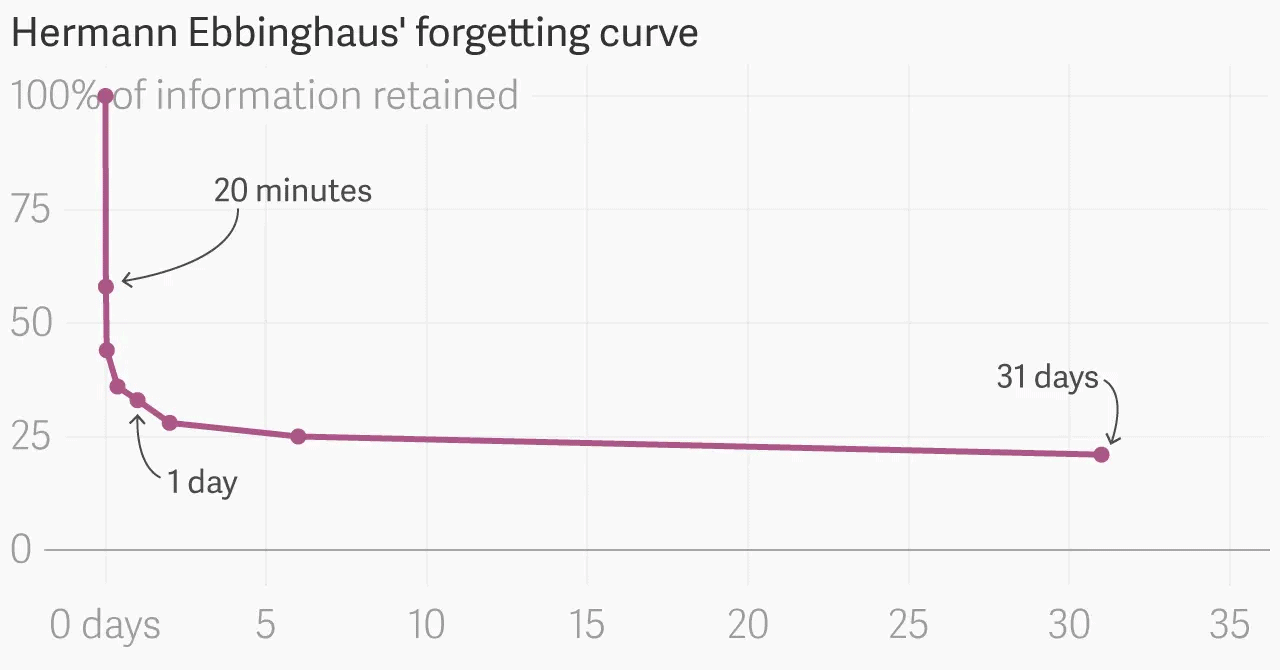 What is the Ebbinghaus Forgetting Curve?

The Ebbinghaus forgetting curve is a graphical representation of the forgetting process. The curve demonstrates the declining rate at which information is lost if no particular effort is made to remember it. The forgetting curve was defined in 1885 by German psychologist Hermann Ebbinghaus (1850-1909) in his book Memory.

Ebbinghaus was the first psychologist who systematically studied memory and learning. He recorded his findings mathematically in an attempt to discover patterns of forgetting and memory retention.

Ebbinghaus’ experimental method, like that of many of his peers, consisted of conducting a series of extensive tests on himself. He created hundreds of three-letter words, or “nonsense syllables” as he called them, like “wid”, “zof”, and “qax.” The psychologist then tried to memorize lists made of these words and determined for how long he could remember them after different time intervals. He plotted his results in a graph that we know today as the forgetting curve.

Ebbinghaus found that the forgetting curve is exponential in nature. It starts off very steep—the amount of retained knowledge drops dramatically soon after we acquire new information. In fact, most of the forgetting occurs within the first hour of learning. And that’s not all. After a day or two, we typically forget around 75% of what we have learned.

Without any additional work, we will quickly forget most of the content of a course, for instance. A week later, it will be as if the learning had never occurred at all.

Fortunately, there is a point at which the forgetting rate starts to decline at a slower pace. After a day or so, it usually levels off. This is when we can partially absorb essential details and store them in our long-term memory. In other words, the day after taking a course, we will retain only a few details but we will be able to remember them for several more days.

According to Ebbinghaus, the basic forgetting rate doesn’t differ significantly between individuals. Still, this rate can be influenced to a certain extent by factors such as:

While some aspects that contribute to the speed of forgetting cannot be changed, Ebbinghaus proposed the use of two methods when we purposefully acquire new skills or knowledge: mnemonic techniques and repetitions. Implementing these strategies can help us overcome the forgetting curve.

Mnemonic learning techniques rely on “repackaging” of the information, a process that helps the brain to store the information and find it again when needed. This strategy is based on creating associations with something that is easy to remember. For example, mnemonics use images, emotions, patterns, or rhymes like the alphabet song, to help us absorb the information more efficiently.

Ebbinghaus showed that repeating and reviewing the acquired knowledge helps strengthen our memory. It is clear from the forgetting curve pattern that the initial repetition of the information should ideally occur within the first day of learning.

But this is not enough. While an initial review of what we’ve learned certainly helps us remember the details in the short term, reviewing multiple times will enable us to retain them for much longer. Each time we revisit the same material, we retain larger chunks of information. As a result, the forgetting curve will start flattening out at a much higher level. That means we will forget at a slower pace.

In order to retain knowledge and fully embed the learned material into our long-term memory, we have to periodically review the information. Research indicates that a minimum of three reviews is necessary for obtaining the best results.

Ebbinghaus argued that each subsequent repetition increases the time needed before the next one. This is called spaced learning.

How to Use the Ebbinghaus Forgetting Curve with Spaced Learning

For Ebbinghaus, overcoming the forgetting curve had more to it than just simple repetitions.

Repetitions have to be spaced for optimal effect. Repeating new facts many times within an hour is not useful in overcoming the forgetting curve. If we are not required to make any attempt to recall and retrieve the information, the improvement is impossible because the memory hasn’t had a chance to decay. At the same time, if the information is repeated too infrequently, retention and recall will fail. In this case, we will have to start the learning process all over again. 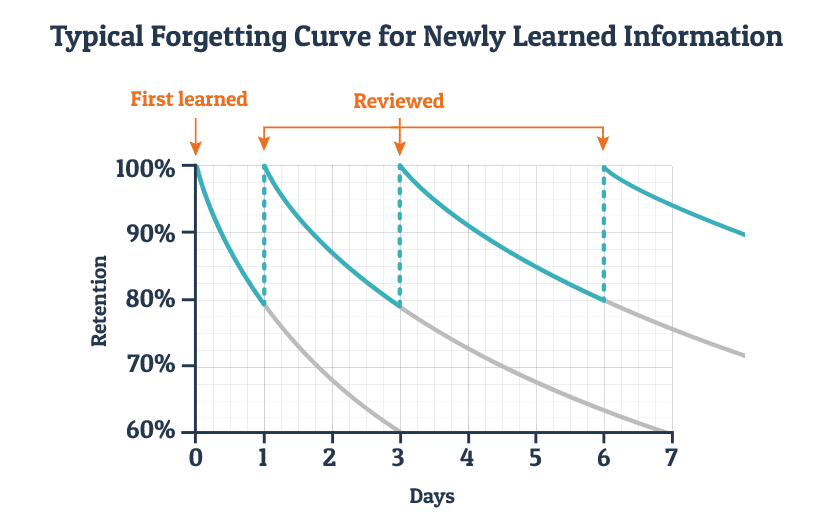 However, when the material is being repeated at strategically spaced intervals, the brain reconstructs the memory and strengthens it in the process. These specific time intervals between multiple learning sessions are essential. They allow the brain to recover between repetitions and consolidate the learning.

We can recall information and concepts better if we learn them in the course of several spread-out sessions.

It is not necessary to review the information in exactly the same way in which the initial learning occurred. Presenting the same concept in a slightly different form like a video or exercise is just as efficient in strengthening the memory and overcoming the forgetting curve.